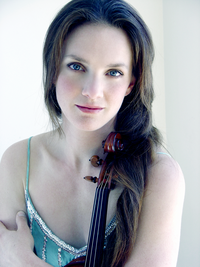 The concertmaster for San Francisco Opera’s production of The Ring of the Nibelung is Laura Albers, who is playing her first complete Ring. Albers, in addition to being an orchestra musician and the violinist of the Albers Trio, is also a gourmet cook and a triathlete — this last training, at least, could come in handy when playing the Ring. SFCV asked her about her experience as a player in Wagner’s all-encompassing orchestra.

I love everything about it. I have only played two of the operas so far and I’ve done a bit of studying on my own. But this music is so incredible and the stories that go with it ... so I’m becoming a Ring-o-phile, you could say.

These operas are long. What’s a typical day like, if you have to do a rehearsal and then a performance?

We have been doing single and double rehearsal days, so that’s anywhere from three and a half to seven hours of rehearsal time. But on the days when we have shows, we won’t have rehearsal in the morning — unlike with other operas, when we would do a rehearsal and a show. These are pretty intense, though. It’s a lot of playing.

Do you get tired?

Yes, I do. That’s what the intermissions are for.

Do you have to work extra hard to put out the extra sound that Wagner often calls for?

Yes, I think extra energy is needed all around. And also, there’s a lot of counting. I know sometimes we play for 10 minutes straight and sometimes we have to count rests for — well, I can’t speak for the others in the orchestra, but I think our longest rest is eight minutes, in Walküre. Other instrumentalists have to count, and then come in for, like, five notes, and then ... more rests. So it’s just intense, keeping your mind awake the entire time.

Video: Behind the Scenes at S.F. Opera's Ring

Find out about all the myriad details that The Ring require

It’s also a huge orchestra [89 players]. Have you ever been in the pit with this many players?

Only for the last two Wagners. You have to get in there early to make sure you have your space staked out and that you can work with everybody around you — so you all have room to bow or put your instrument up, and you’re not going to hit anybody in the head.

What does it take to prepare The Ring, from an orchestra standpoint?

Well, we’ve all been practicing on the parts for many months, so when we actually get into the pit for our first rehearsals we know all our notes and we’ve been listening to it, studying the music, and so we know how it’s supposed to go; it’s just a matter of fitting it all together. We started rehearsals two and a half weeks ago, and we had our first dress rehearsal Thursday night and we open Siegfried on Sunday. But we’re still rehearsing the others, even as we open Siegfried and Götterdämmerung.

A lot of The Ring, despite its hugeness, is dialogue between two characters. Do you have to tamp down the sound of the orchestra to make sure singers are being heard?

Yes, and it varies a lot by where the singer is on stage and which instrument is playing. It’s very important for the orchestra, in these dialogues, to hear the singers, to be with them, and also whoever across the orchestra is the other part of the dialogue.

So you’re finding a lot of this out on Thursday?

Right, because for the few weeks before [the opening] we rehearse in the Presidio, so everything changes completely once we’re in the pit, and we have a scrim over part of the orchestra, and the singers are much further away.

Do you get into the Ring mind-set? Is the music always reverberating in your head?

What do you do to get away from The Ring? What are you doing in your downtime these days?

In my down time, I’m usually outside exercising or cooking food. I love eating and exercising. We went to hear a band that did cover tunes in Berkeley last night, so that was a different musical experience and lots of fun — everything from Britney Spears to Metallica.

And what will you do when it’s all over?

I’m going home to Colorado for a week. [My husband and I] got married there and we’re going to go back for our first anniversary.