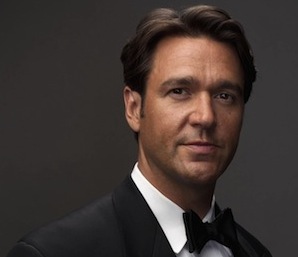 Baritone Nathan Gunn has lived a vocal charmed life, of sorts. Not long after he received his bachelor’s degree in music from the University of Illinois, he participated in the Metropolitan Opera’s Lindemann Young Artists Program and, at 24, won, the Met’s National Council Competition. By the time he received a 1997 Tucker Foundation Career Grant, his career was well on its way. With fame propelled as much by his smooth, suave instrument as by his willingness to display his muscle-builder physique in one shirtless role after the other — he has stripped to the waist in four out of the five productions of Britten’s Billy Budd in which he has starred — he was soon appearing in major opera houses around the world.

In the midst of rehearsals for San Francisco Opera’s English language production of Mozart’s Magic Flute, in which he plays the birdcatcher Papageno, Gunn graciously agreed to chat during his lunch break. How he managed to maintain such an even toned, relaxed demeanor through the course of our interview attests to his being at ease in the spotlight.

Have you ever before sung the Magic Flute in English?

This is the third translation I’ve sung. I’ve sung it at the Met in their abridged English version, and when I was at school I did a different version. It actually translates very well.

It very well may, but how does it translate in your mind when you have those other versions vying for attention?

It takes a little bit of time to memorize, but that is to be expected. What I find most interesting is, depending on the translation, the character of Papageno changes. In German, it’s pretty clear what kind of person he is. But with some more, up-to-date translations, he’s different. He can be quirky, or a bit wacky — not just a birdcatcher who spends a lot of time in the forest. But as the translation changes goes, the character changes, and the motivation for some of the things he does has to change, as well.

The hard part of it is that, in my head, I always have, first and foremost, the German! There are some things that I do because I know the person is going to say, “What are you doing?” and I reply, “I’m lying in a faint.” But that’s not in this version. So there has to be another reason why I’m on the ground. Why does he get on the ground?

And you can’t just explain it because “It’s opera”?

How is Papageno presented in the German?

He really is an everyman, a simple person who likes simple things in life, and who has a job that puts food and wine on the table. The thing he’s missing in life is a mate, a partner. That’s it. He’s not particularly courageous. He says what everybody else would want to say, and he certainly doesn’t have lofty ideas. He’s a peasant who doesn’t have time for philosophy. He just survives, and that dictates how he thinks.

In this translation, there is no forest. It’s a magical world that’s been created by the scenic designer and stage designer. The way he says things almost makes him more of a city person. He might still catch birds, but he’s more urban than rural. That changes how you move, and how the character develops.

Jun Kaneko timed his animated backdrop for the San Francisco Opera production to the Colin Davis recording of the opera. Have the cast and conductor Rory MacDonald had to make a lot of adjustments for this production’s tempos?

We’re adjusting the timing so the animation is timed correctly. He never watched a video; he listened over and over until he developed ideas. Some he rejected; others he kept. It really developed organically over time. He wanted the stage director to do what the stage director does, while he created this beautiful world of light and color for us.

The photo on SFO’s website shows you as Papageno climbing a net. Is this production anywhere near as physical?

No. The Julie Taymor production at the Met has lots of stairs and movement and running up and down, and lots of movement all over the place. Here, he’s active, but there aren’t levels.

We, of course, have been able to see what is going to be projected on some of the screens behind us. It’s absolutely beautiful and feels like it’s part of the composition, which is a lot of fun. I’ve never had to work this way before, because the stage isn’t as alive as we are. It works with us, and we can use it — particularly shadows — but it’s kind of like having another character onstage that you’re dealing with all the time. And it’s not stagnant; it moves.

I’ve already seen what the presentation looks like onstage during the overture. It’s really phenomenal. It really makes you want to see the rest of the opera.

How many years have you been singing Papageno?

The first time was in high school, when I was 17. [He’s now 42.] The Magic Flute is the opera that got me to pursue music.

I’d sung in musicals in high school, and my mother suggested I take a voice lesson to maybe sing at weddings during the summer to make a little extra money. There was an opera workshop at Indiana University in South Bend, where I grew up, and the man who ran it asked me if I’d like to sing the part of Papageno in The Magic Flute. I’d never heard the opera before, and had no idea what he was talking about. Then he gave me the Von Karajan recording to listen to. I was bowled over. I’d never heard anything so beautiful. So I said yes, to a different English translation.

That was the beginning. When I went to college, I focused primarily on German art song. But Papageno is one of the roles I hope to live with for a very long time, because he’s sort of ageless. He can be a very young guy, he can be kinda old — it doesn’t really matter, because there’s always something wonderful to say about him.

I think Magic Flute is the most spiritually transcendent opera I’ve ever heard, with the possible exception of sections of Fidelio. But sometimes, when it’s done in English, especially for children, it’s made into a cute little fairy tale, and the whole spiritual dimension is submerged. What’s happening in this production?

I think the key to have this opera transcend what we usually perceive in life is the stage directing. If the characters are played like real human beings rather than symbols, you can get a very beautiful story that’s told. For example, we were just working on the scene where Pamina comes in and sings her aria [in German, “Ach, ich fühls”]. She doesn’t understand why Tamino won’t talk to her.

Papageno is one of the roles I hope to live with for a very long time, because he’s sort of ageless.

Director Harry Silverstein is making you think about what’s really going on. She’s maybe 15 years old. It’s the first time she’s ever been in love. She doesn’t know what it’s like, what’s supposed to happen, how she’s supposed to act. Then Tamino won’t talk to her, and he acts very coldly. When she says to him, “What did I do? You don’t love me anymore? You don’t!” that becomes the impulse for her saying, “I don’t want to live feeling this way; I’d rather be dead.”

Fifteen-year-old kids don’t know that feelings will change, and they will survive this kind of pain. If the opera is done right, and played right, it’s heartbreaking. If, on the other hand, the prince, Tamino, comes out acting like he’s not going to talk, and Papageno is acting like a goofball, it can sometimes be not so moving. When Papageno says, “See, I can be quiet when I have to” — if he’s really upset at what she’s going to do and why Tamino won’t talk to her, because he doesn’t understand either — it can be quite moving if it’s played right.

When Papageno is in the same situation, and no one will help him, he hopes he’s not going to have to hang himself. But at the point where the three little-boy spirits come in, they come in because he’s really going to kill himself. This dual situation ties those two characters together.

Sometimes people exaggerate the fainting part of Tamino rather than the warrior part, but he’s a warrior prince, a poet, and someone who is brave and strong. He looks like he’ll be a good candidate to pass on the knowledge of this brotherhood, which is something they take very seriously. If we as actors can express that like we’re supposed to, it won’t be a boring opera; it will actually be quite entertaining.

How is it working with your Papagena, Adler Fellow Nadine Sierra?

She’s terrific. We’ve blocked the scenes, and she’s absolutely hilarious. She’s wonderful onstage, and she’ll do whatever it takes to make the scenes effective and entertaining. You’ve got to have a Papagena that’s willing to be a little self-effacing, and not scared to pull Papageno’s head to her bosom, and all that sort of thing. She’s a really good actress, she’s comfortable with her body, and she moves really well. She has to be old and gross, and then really strut her stuff. She’s not shy.

If the opera is done right, and played right, it’s heartbreaking.

You certainly haven’t been shy. You’ve done more than your fair share of shirts-off roles. Are you still being drafted into those roles?

Yeah, but not as much, thank God. It’s one of those things where, if it’s appropriate, I’ll do it. I don’t care.

It’s all because of [stage director] Francesca Zambello. This is the reason any baritones have to strip down. It all started with her Iphigénie en Tauride at Glimmerglass in 1997.

It figures that it would be a lesbian to get all these men to take their shirts off.

Without trying to not ask the operatic equivalent of the question that’s asked on Jewish Passover — “why is your Papageno different than all other Papagenos?” — please tell us more about your characterization.

He’ll certainly be different than I played him before, just because the translation [by San Francisco Opera General Director David Gockley] is different and more modern. They’ve taken some liberties with some colloquialisms and funny moments.

I think Papageno’s character in this production is not constantly terrified and wanting to run away and wimp out; his purpose is more to bring out the human side of the people he’s around. The Priests, Tamino, and Pamina are all a bit in themselves, I suppose, and not reacting to the environment that they’re in … not giving an honest reaction of fear, of hunger or temptation. Papageno is different; he can resist every temptation except temptation. And since it’s there all the time for him, he is the person who translates everything else that’s going onstage into something that’s real.

It’s all a bit odd, like a celibate priest telling you how to raise a family, or to find two hours in your day everyday to pray. Well, if you have five kids, you can’t really do that. Papageno states the obvious in this particular version. I like that about him.

When you have five kids, you do need to pray each day that you’ll get more gigs so you can feed them.

[Laughing] I know! Well, I’ve got plenty. I can get rid of a couple, and still have a few left over.

Which? Kids or parts?

< Oh, no! I don’t know if I want to end on this note. Lord knows, you were pulled into taking your shirt off by a lesbian, and now you’re killing some of your kids!