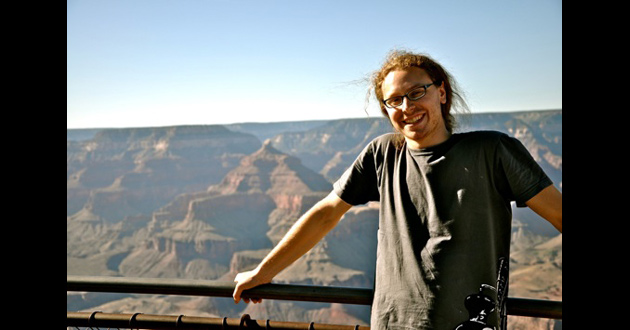 It’s a wrap for Quest, an independent Berkeley-based feature film that traces the real-life relationship between a failing middle school student (Santiago Rizzo, called Mills in the movie) and the history professor and athletic coach at Willard Middle School, Tim Moellering, who changed his life.

From the day after Thanksgiving to New Year’s Eve, the film was shot in multiple locations in and around Berkeley with Rizzo directing a cast that features Gregory Kasyan as Mills; Lou Diamond Phillips (La Bamba) as his abusive step-father; Betsy Brandt (Breaking Bad) as his mother; and Dash Mihok (Ray Donovan) as Tim Moellering. The score is being composed by Dylan Mattingly, who studied with Moellering during his years as a teacher and coach at Berkeley High School. Moellering died of cancer in January, 2011.

“My music for the film is going to be an emotional representation, not a specific depiction of the action.” –composer Dylan Mattingly

In 1995, the year in which the movie is set, Rizzo (Mills) is suffering from the effects of an abusive home life and largely living on the streets where he has adopted the tagger name Quest. He is on the verge of being expelled. It is at this crucial moment that the life paths of Mills and Moellering intersect.

“I first met Tim here at Willard Middle School in the seventh grade,” said Rizzo at an emotional memorial service for Moellering on Jan. 29, 2011. “At the time, Tim was an English and history teacher as well as director of the afterschool programs and athletics. Tim gave a sports program presentation in my homeroom class. I followed him out of my class (without permission, of course) and I asked him if I was too small for the football team. He laughed at me and that’s what sparked his initial interest in me .... At 12 years old, I had been suspended multiple times; I was on the road to expulsion. I was heavily addicted to graffiti ... my tag was just about everywhere in the East Bay. I had been arrested several times, had been in juvenile hall for a night, and was about to get put on probation. I spent more time on the street than I did at home because the street felt safer to me. I was in deep need of approval and attention and like many at- risk youth, I was searching for acceptance.”

What followed was a remarkable success story that included Moellering’s adoption of Rizzo; his graduation from Willard Middle School; attendance at Berkeley High School; acceptance to Stanford University; and successful career as a Wall Street hedge fund manager. But when Rizzo discovered that his mentor was dying of cancer, he quit his New York job and returned to Berkeley to be with Moellering. It was during this time that the screenplay for Quest began to take shape.

Dylan Mattingly, who was mentored by John Adams and is now in the graduate music program at Yale University, knew Moellering as an inspirational history teacher and (in Mattingly’s words) “an intellectual baseball coach”at Berkeley High. And like Rizzo, Mattingly spoke at Moellering’s memorial service.

“After the service,” Mattingly recalled, “Santiago (Santi to his friends) wrote to me and said he’d like to get together. He’d heard about me from Moellering.”

More than just getting together, Rizzo said that Moellering had made it clear that were the film to be made, Dylan Mattingly was to compose the score.

“At first he was skeptical,” said Mattingly. “But I convinced him.”

During the Christmas break shooting, Mattingly was on set nearly every day, both as the film’s composer and as an advisor to the cast and Rizzo.

“My music for the film,” he explained, “is going to be an emotional representation, not a specific depiction of the action. There’s a crucial moment just before the climax that is a montage set to Bob Dylan’s “A Hard Rain’s Gonna Fall.” So what I’ve done with the music is create a scheme that’s drawn from the chord progression of “Hard Rain,” but not in a particularly perceptible way. You may not be aware of it at all. But when the climactic moment comes, the song will feel like it’s an inevitable outcome on a musical level.”

The instrumentation, Mattingly said, will be for 4 violins, 2 violas, 2 cellos, electric bass, string bass, and piano.

Now in post-production, Quest is already being submitted for consideration at the Cannes and Tribeca Film Festivals.