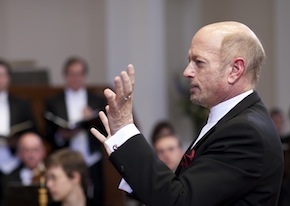 It’s July, and in the Bay Area and our not-so-distant neighbor Carmel that means the annual J.S. Bach splurge. For the past three years, the delights of the Carmel Bach Festival have been augmented by the American Bach Soloists’ Festival and Academy. And that’s not to mention the chamber music festival, [email protected], which focuses on Bach and his legacy this year.

This weekend, ABS opens its festival with a production of Heinrich Biber’s 53-part Missa Salisburgensis, which has long been sold out, and its annual traversal of Bach’s B-Minor Mass, plus a chamber music concert. The musicians participating in the Academy play Handel’s oratorio Esther and, next Tuesday and Wednesday, two chamber concerts of their own (each is only $10 per ticket). Cellist Tanya Tomkins is featured in a concert with ABS on Saturday, July 20.

For Jeffrey Thomas, artistic and music director of the American Bach Soloists, there’s a special joy in being able to put all these concerts together in a concentrated work period. “What else would I be doing?” he asks. In particular, he relishes the chance to return regularly to the B-Minor Mass, a work with which he has become closely associated as a conductor. The ABS recording is still one of the most subtle and powerful performances available, but, as Thomas says, “You can never spend too much time with a great work of art. There’s always something to polish and make better. It’s a privilege, really.”

Some 15 years ago, this bonanza would have been almost entirely the result of the Bay Area’s amazing core of early-music instrumentalists, such as Thomas himself. But that has changed, making the Academy, one of his long-cherished dreams, a hotbed of top-drawer talent. Thomas explains:

The thing that’s so different nowadays is that these conservatory students who, 20 years ago, would have gone to Juilliard and wouldn’t have played any music written before Brahms [a slight exaggeration, perhaps] — now Juilliard, for goodness sake, has an early-music program. That’s crazy! I went to Juilliard. It’s ridiculously wonderful that they have this; I never would have imagined it.

“Players today are really motivated to learn this music. In this new generation, nothing is off limits to anyone, if they’re willing to excel at it.” – Jeffrey Thomas, director, American Bach Soloists

But the way that the young players approach this is with all the chops that they have to be able to tackle the most difficult 20th-century repertoire, and they go at early music with the same attitude about its technical demands. They’re ready to work as hard to play it as their more-standard repertory. There’s remarkable industriousness in these young players: They want to do it all. And they can.

The change is part and parcel of the success of the early-music movement in revising and raising our expectations about what performances of Bach and his Baroque cohort can sound like.

A couple of decades ago, there was one articulation for early music among modern players — short and staccato. I’m not exaggerating, and we all heard it. It meant just about every performance of early music by a modern orchestra would sound the same. The idea of considering the shape of a note in a radically different way from the way that they considered it in later repertories — well, it just didn’t happen. And for a while, in the late ’80s and ’90s, early music became sort of off limits for big orchestras; they just didn’t tackle it anymore. Now they’re back at it, and you have conductors who focus mostly on the standard rep who actually know a whole lot about this stuff.

The ABS Academy, then, is not a festival where you’ll hear eager-beaver youngsters being initiated into the secrets of Bach and Handel; no, these are superb musicians from all over the country dealing with the finer points of interpretation. And many of them will become the next generation of early-music specialists, though perhaps not as specialized as the pioneers, back in the day when early-music players were still a “movement.”

“Players today are really motivated to learn this music,” says Thomas. “In this new generation, nothing is off limits to anyone, if they’re willing to excel at it. It’s gratifying to see such rejuvenation — not simply younger [players], but that there are more people interested in it, who see that it’s a valid way to spend their time.” And this means that a lot of musicians, many of whom are not local, are “graduating” directly into the ranks of ABS. Thomas reports: “As expected, this Academy has provided a great number of wonderful new players, and actually I’m very happy to see some of our Academy singers now employed by other important groups in the area.”