The American Bach Soloists’ first annual Academy, held July 5-18 at the San Francisco Conservatory of Music, offers more than just another summer festival. Sure, the Academy gathers elite faculty performers for enough concerts and lectures to satisfy even diehard fans. But by bringing a select group of emerging professional musicians alongside masters of the trade, the Academy also offers a revealing glimpse into the future of early-music performance. 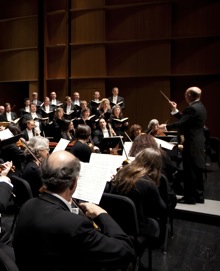 For many, the Academy’s main highlight will be its two main stage productions on July 17 and 18. J.S. Bach’s Mass in B Minor, performed on Sunday the 18th, is a well-known (if still a potent) standard. Yet for an intriguing contrast, Saturday’s performance of Handel’s La resurrezione (The resurrection) should prove highly entertaining. Written at the age of 23, this oratorio seems particularly apt for the Academy, its vigor and youthful energy being analogous to the Academy’s own fortitude in nurturing its young participants.

Jeffrey Thomas, ABS’ music director and the Academy’s codirector, views La resurrezione as a useful stepping stone toward future operatic projects, in line with the Academy’s ambitions for growth. “We plan on moving fully toward Baroque opera in future seasons, but we also anticipate those seasons will have three-week terms, rather than two weeks as is the case in this inaugural year. So we chose La resurrezione specifically because it’s a bit shorter than nearly all of Handel’s operas,” he says.

But don’t be fooled: This shorter oratorio is no trifle. “[La resurrezione] is an extremely ‘operatic’ work,” Thomas notes. “Handel composed it during his exciting years in Rome, when he learned, mastered, and surpassed the compositional techniques of his Italian colleagues. He was hot on the heels of his first operatic successes in Hamburg, and was determined to continue to cultivate what would become his singular command in the world of opera seria. La resurrezione is an opera in nearly every way.”

Academy students appearing in La resurrezione are coached by multiple faculty members from various performance specialties, thereby increasing their depth of perspective and helping them to keep pace. “The instrumentalists in the Handel orchestra, as well as the singers, will have this opportunity to learn as much as they can about context and rhetoric,” Thomas says. “The rehearsal period is short — barely more than a week — but each student has had their assignments and parts and scores for several weeks already.”

To recruit its first class of students, Academy directors contacted university programs with specialties in historically informed performance practice and canvassed its own performer networks. Besides submitting recordings, applicants had to write two essays: one a description of their early-music qualifications and interests, the other a statement of desired outcomes in terms of technique, interpretation, repertory, or the historical/cultural context. Student enthusiasm exceeded Thomas’ highest expectations. “The response was overwhelming! We had huge numbers of applicants,” he enthuses.

Creating the Academy fulfills an ambition Thomas has long held to devise a project involving instrumental performance and Baroque opera. “The Academy is something we’ve been planning for and dreaming about for years. What we couldn’t identify was the ideal venue — that is, until the new and stunningly beautiful S.F. Conservatory facilities opened a few years ago.” And though this summer’s program combines what Thomas initially conceived as separate instrumental and vocal tracks, the result “has the added benefit of even more interdisciplinary study for all the participants.”