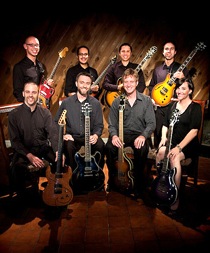 For many of us, classical music means the deep, melodious sounds created by the strings of a violin or the delicate, dulcet sound of light, nimble fingers swiftly climbing up and down the keys of a piano. These are exactly the conventional notions that the Los Angeles Electric 8 has passionately defied since 2007. This octet consists of classically trained guitarists who perform on electric instruments usually associated with rock. Their repertoire spans the late Renaissance to the present, producing an assortment of rich sounds ranging from Western classical music to arrangements inspired by Indonesian gamelan traditions, as well as new works composed specifically for the ensemble.

On June 18 the octet will have made its way north for another distinctive performance at the Hillside Club, in Berkeley. Native Angeleno and group member Philip Graulty explains that with each performance, he aspires to expose audience members to new ideas and get them to think about the music in a different light. “My hope for the group is to further break down these genres that define what is classical and what is popular and what is jazz, and what rock should sound like ... Our goal is to have our listeners no longer thinking of classical music as stuffy or as a genre that you must be educated to understand or enjoy — it’s for everybody,” says Graulty.

The group is emblematic of a new breed of chamber music groups that don’t recognize boundaries as all that important. Given their training, as well as their background and innate interest in punk and rock music, it made sense for them to explore classical music with the iconic rock instrument. Graulty recognized that there was no ensemble or chamber group that used the electric guitar in quite the same way.

Genres and labels are quickly broken down the moment eight electric guitars stray away from their expected punk rock sound, to provide instead an amazingly unique, clean sound that conjures up textures of bells, harpsichords, and pianos. As you listen to the melodies, wondering “Are those chimes? Is that a dulcimer? What style of music is this?” it becomes evident that the Los Angeles Electric 8 has achieved its objective: merging two conventionally distinct worlds of music into one, neither one restricted by the limitations or expectations of its genre.

Graulty and the other members soon took advantage of the opportunities that came with playing music on the electric guitar, one of the most popular and recognizable instruments in the U.S., whose sound is widely accessible to mass audiences. Graulty explains, “We are able to use that medium as a means of teaching or sharing new music or new composers that electric guitar enthusiasts might not otherwise listen to. By doing this, we hope to show that classical music does not have to be this one thing in one box, while the electric guitar has to be this other thing in another box. They can actually work as one.”