Triple Threats at Music in the Vineyards

Music in the Vineyards 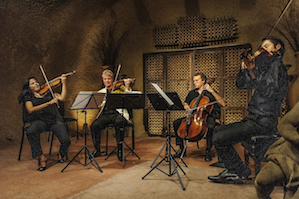 Aficionados of Beethoven's String Quartet, Op. 74 can hear the same musicians play the piece on three consecutive evenings at three different times and in three different winery settings Aug. 15-17 as part of the 20th anniversary season of Music In the Vineyards, a chamber music summer festival in the Napa Valley.

The 20-year-old music series began on Aug. 1 at Frog's Leap Winery with a performance of Romantic music, and ends scrumptiously on Aug. 24 with a program of Vivaldi and Piazolla at the Clos Pegase Winery. Following the closing night concert, audience members can mingle with musicians at a wine reception and buffet dinner at Meadowood Lawn winery.

"In the eight years that I've served as Executive Director, the festival has strengthened and grown artistically year after year," said Evie Ayers in an e-mail. "We've now become known for the quality of our music, and we're incredibly proud of where we're at after 20 years."

Minnesota Orchestra violist Michael Adams with his wife Daria, a violinist with the Saint Paul Chamber Orchestra, founded the festival in 1995. The couple wanted to create something like a spa for musicians. Over the years a number of their colleagues, friends and even bosses ― Minnesota Orchestra Music Director Osmo Vanska ― have made the trek to California's idyllic wine country to play in the festival. 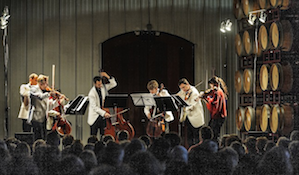 This is the first time the festival has produced the Three-By-Three expanded weekend of simultaneous concerts. "Each venue was specifically chosen for its unique intimacy to enhance the listener experience," said Natasha Biasell, a festival spokeswoman, in a telephone interview."Say you're interested in a specific quartet, you can experience what it's like to hear the same program in three different places, how the acoustics are different."

Apart from Harvest Inn and Provenance vineyards, the nine wineries participating in the Three-By-Three concerts are new to the festival.

The couple also carefully curate the festival's repertoire, according to Biasell. "It's completely fresh each season," she said. "They hand select pieces that fit well together and offer a well balanced variety of new and classic chamber music. They also take the individual festival artists into account and what will work well for their specific strengths."

Over the course of the festival 42 musicians will have played at concerts Wednesdays through Sundays, including members of the Escher String Quartet and the Pacifica Quartet. Several violists will continue to fill in for Michael Adams because of a shoulder injury sustained just before the festival opened, according to Biasell.

Pianist William Wolfram reunites with violinist Frank Almond on his “Lipinski” Stradivarius, opening with Giuseppe Tartini's Sonata in G Minor (Devil’s Trill) and closing with a celebrated Brahms’ horn trio on Wednesday, Aug. 20, at the Markham Vineyards. Immediately preceding the concert, Almond will give the inside story about his 1715 violin, which was stolen from him in January of this year in an armed robbery after a concert. The violin was recovered nine days later.

A program mixing the Hayden Brothers with a work by the film score composer Miklós Rózsa and a trio by a young Leonard Bernstein plays on Aug. 23 at Hall Wines.

After the last Three-By-Three concerts on Sunday, Aug. 17 at various wineries, audience members and musicians can gather outdoors at Raymond Vineyards. There, while the sun sets over the vineyards, they can muse about the just-performed Shostakovich Quartet No. 9 over a glass of buttery Chardonnay and bid adieu until next August.