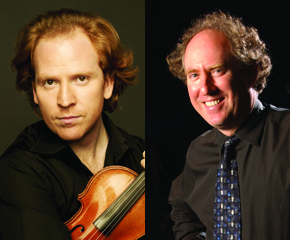 It’s probably safe to say that few classical musicians work harder than Jeffrey Kahane. Best known locally for his decade-long tenure conducting the Santa Rosa Symphony, Kahane until recently managed to hold down two other conducting posts, at the Colorado Symphony Orchestra and the Los Angeles Chamber Orchestra, while maintaining a thriving career as a pianist. (He recently resigned from the Colorado gig.) Now, this multitalented musician is launching a recital tour with British violinist Daniel Hope, which kicks off Feb. 10 at Herbst Theatre in a performance sponsored by San Francisco Performances.

The program combines favorites by Brahms and Franck with lesser-known works by Olivier Messiaen and Erwin Schulhoff — neither of them exactly avant-garde pieces, but both representative of early 20th-century modernist trends. Kahane describes the Messiaen as “still showing the influence of Debussy, but also very recognizably the work of Messiaen, with signature harmonic formations that he was already using. It’s a very compact piece, a wonderful sort of showpiece for both violin and piano. But Messiaen being the spiritual composer he is, the piece never indulges in virtuosity for its own sake.”

Schulhoff’s tragic life as a Holocaust victim resonates with both Kahane and Hope, who are ardent advocates of his music. “We share a personal connection to this music because both of our families suffered persecution under the Nazi regime,” Kahane remarks. “Schulhoff was a very significant and unusual voice, not only a gifted pianist but a superb jazz player. Although the sonata we’re playing doesn’t sound like jazz, you can hear in the harmonies and textures that Schulhoff knew jazz very well. This is music of great power, very compact and concise.”

Blending the familiar and the unknown comes easily to Kahane and especially to Hope, who has garnered wide notice for his meandering musical journeys from classical to jazz to raga. “Both of us have very eclectic tastes. Daniel has become known for doing an extraordinarily wide range of styles and genres,” Kahane says. “He can do unusual Baroque music, as well as new music. He’s a musician of tremendous curiosity and wonderful intellect, but there’s also a very deep expressiveness and communicativeness.”

Kahane and Hope first collaborated six years ago, when Hope was a featured soloist with the Los Angeles Chamber Orchestra. That program — combining music of Mozart and Alfred Schnittke — “was in and of itself radically different, speaking to the kind of intellectual curiosity [Hope] has,” observes Kahane. A return to Los Angeles last spring prompted the two to plan their current program. “We didn’t set out with an agenda per se, just tossed different pieces back and forth a few times,” he notes. “This is what we came up with: two pieces that are pillars of the repertory for violin and piano, two pieces that are very little known.”

The newfound balance in Kahane’s career between conductor and pianist seems to suit him just fine. “I’m really enjoying what I’m doing right now. I’m still doing a lot of conducting, but this is the first time in some 16 years that I haven’t had two orchestras! So that has opened up a great deal of space that I now have, to spend more time at the piano, and I am playing a lot of repertoire that I played before, but I look forward to learning some pieces I’ve been wanting to learn for a long time.”