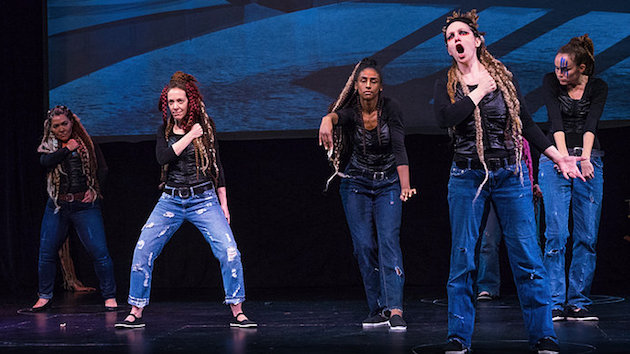 Ars Minerva brought a second forgotten Baroque opera to San Francisco audiences with The Amazons in the Fortunate Isles last weekend. This lively piece by Carlo Pallavicino was last seen in 1679 at the Villa Contarini near Venice and was perfect for the intimate setting of the Marines’ Memorial Theater. The staging and fine singing made for a vibrantly entertaining performance.

The basic plot follows that of a standard Baroque comedy with several interconnected love triangles, war, betrayal, and a happy ending. The princess of the Amazons (Pulcheria) falls for shipwrecked sailor Numidio, who naturally falls in love with her friend Florinda. Of course, even though Florinda might reciprocate Numidio’s interest, she is already the adored of another Amazonian, one very jealous lady named Auralba.

There’s also Jocasta, an adopted daughter of the princess, and a crazy-in-love madwoman Cillene, not to mention the Sultan who comes to make war on the Amazons and who is secretly in league with Numidio.

Carlo Pallavicino's score is certainly no masterpiece, but it is pretty. Jocasta's lament was a highlight. Still, the opera shows the energy and variety of Venetian opera in the 17th Century, and there must be many more like it awaiting rediscovery. It is wonderful that Ars Minerva is taking on this work.

The giddy production, directed by Ars Minerva founder and Artistic Director Céline Ricci, is chock full of sight gags and running jokes. An iPhone makes an appearance early on, reappears as Numidio plans to send a text message to the Sultan, and the Nokia ring tone is played on the harpsichord when the Sultan gets the message. Whenever the mad Cillene mentions her fictional beloved, Pericleo, his name spins in the supertitles. Ricci is consistent in her approach, and it works without being overdone or busy.

The stylish, black and white static projections for each scene certainly helped. Essentially backdrop illustrations by Patricia Nardi, they were involving without being a distraction. 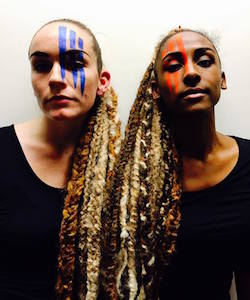 The Amazonian costumes were simple: distressed jeans paired with long-sleeved, black leotards and pleather bodices. Almost everyone had elaborate long braids, except the Sultan, who had a turban made of crimped hair.

The youthful cast was uniformly talented with clean, bright voices. Soprano Aurélie Veruni, as Pulcheria, had a pristine sound and attacked her brilliant coloratura passages with agility. It was impressive how much heft and volume her slight frame produced. Mezzo-soprano Kindra Scharich sang Florinda with contrasting warmth. Her resonant, rich voice is truly a joy.

Tenor Ryan Matos has a sweet voice and was appropriately silly as Numidio while soprano Tonia d’Amelio convincingly played the strident Auralba. Mezzo Molly Mahoney was very funny as madwoman Cillene and her strong, ice-toned voice served her well. Soprano Cara Gabrielson was no less successful as Jocasta, her lovely sound almost had too much ease to it when she sang a beautiful lament when severely wounded in battle. Rounding out all these high voices was baritone Spencer Todd as the Sultan.

Two dancers were incorporated into the production as Amazons. Their choreography, by Muriel Maffre, incorporated elements of ballet but was fairly abstract.

The tiny orchestra was led by conductor and harpsichordist Derek Tam. The playing was graceful and the sound rather dry, given that it was mostly strings — harpsichord, theorbo, two violins, and cello. The timpani and two trumpets joined in for battles and processionals. It was hard to not feel sorry for the trumpet players: Their period instruments are finicky and difficult, and they were frequently out of tune. The orchestra members sat onstage, occasionally interacting with the singers. 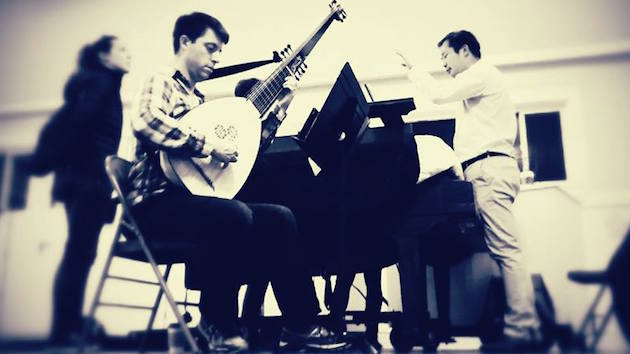