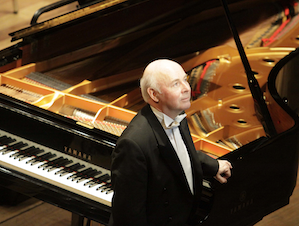 Pianist Jorge Federico Osorio boasts a repertory as diverse as the countries he’s traveled. Born and raised in Mexico, he studied at conservatories in Mexico, Paris, and Moscow. His expansive range features 18th through 20th-century composers hailing from Europe to Latin America, from Bach cantatas to contemporary Mexican parlor pieces.

Hosted by Cal Performances, Osorio opened his solo recital on Sunday with J.S. Bach’s Nun Komm’ der Heiden Heiland, BWV 659, arranged by Ferruccio Busoni, and Ertödt’ uns durch dein’ Güte! from Cantata No. 22, arranged by Walter Rummel. Both pieces are chorales transcribed for piano. Osorio deftly expressed each voice with care, taking effort in the cantata chorale to bring out a middle voice that could have easily been lost in the texture of the higher and lower voices.

Consistently delivering a smooth, warm tone, Osorio’s pedaling at times overwhelmed, lending an air of blurriness to the bass line. While this was partly owing to the resonance of the auditorium, a lighter touch on the pedal could have better preserved the polyphonic lines, which should weave together like vines.

Osorio concluded the first half with Franz Schubert’s Piano Sonata in B-flat Major, D. 960, one of the last pieces the composer wrote before succumbing to syphilis in 1828. An apt interpreter of Beethoven, Osorio brought out shades of both early Beethoven (who died a year before Schubert) and Brahms (who, like Schubert, idolized Beethoven). Osorio showed delicacy through the heavy melody and light textures of the second movement, although the pedaling blurred some of the intricate arches and walls holding up the melody in the first movement. The lower frequencies and bass lines of the Schubert occasionally sounded harsh when Osorio substituted power for clarity. Still, the passion was palpable.

Osorio’s performance demonstrated a remarkable ability to navigate a sea of ardor without losing control.

Opening the second half, Osorio played a series of barcarolles, or folk songs traditionally sung by Venetian gondoliers, which replicated the ebb and flow of a gondola floating along the Venetian canal. The first, titled “June: Barcarolle,” appeared in Tchaikovsky’s piano suite The Seasons. Next, Osorio played Albéniz’s Mallorca: Barcarola in F-sharp Major, followed by Ignacio Herrera’s Barcarola No. 2, Op. 10.

To each of these pieces, Osorio brought an intimacy and emotion not found in his Schubert interpretation. Fleeting moments of blurriness did not hamper the rich, impressionistic feeling.

Lastly, and daringly, Osorio performed Mussorgsky’s celebrated piano suite, Pictures at an Exhibition. Originally written as a tribute to departed friend and architect Viktor Hartmann, Mussorgsky threaded together a tapestry of imagery, from the swaggering flourishes of the “Promenade” to the valiant dissonances of “The Hut on Fowl’s Legs” to the nationalistic grandeur of the iconic “Great Gate of Kiev.” Here, Osorio brought to bear the whole of his energy, playing each movement without pause and emphasizing the dramatic transitions in style. Still, it sometimes felt as though Osorio was running too quickly through the gallery to stop and admire the paintings.

All told, Osorio’s performance demonstrated a remarkable ability to navigate a sea of ardor without losing control. Earning a standing ovation, his encore performance of Spanish Dance No. 5 by Granados transported the audience to the home of Osorio’s passion, his Latin roots. And what a fine journey it was.