Renée Fleming surprised us on Sunday night. Walking onto the Zellerbach Hall stage for her virtually sold-out Cal Performances recital, ensconced in a form-fitting, gorgeous green dress that would be the envy of any prom queen, she looked as beautiful as ever. But no one expected her, after she took her place alongside the piano, to pick up a microphone and address the audience. 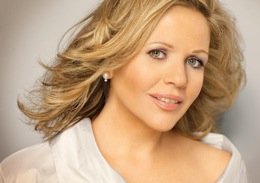 In a low, totally relaxed voice, Fleming introduced five songs from the second part of Messiaen’s Poèmes pour Mi, the first selections on a risky program mostly devoid of crowd-pleasers. Describing Messiaen’s music as “all about light,” she suggested that the composer’s time had finally come.

Regardless of Messiaen’s popular appeal, it became clear that, at age 50, Renée Fleming’s time has come — not just as an engaging and candid personality, which she certainly is, nor as a beautiful singer, which she always has been, but rather as an artist. There was a new depth to her singing, a level of commitment and passion too rarely displayed in many of her other Bay Area appearances.

The voice itself was in prime form. So easily did the star soprano traverse multiple octaves, from the rock-solid low tones of Richard Strauss’ familiar Zueignung (Dedication) to the soaring, ecstatic highs of her Strauss encore, Cäcilie, that I began to wonder if the reason Fleming has sometimes settled for surface sheen is that vocal production has always been effortless for her.

There was nothing that familiar in the first half of the recital. After the Messiaen, Fleming gave us Massenet’s “J’ai versé le poison dans cette coupe d’or” (I have poured the poison into this golden cup), a little ditty from Cléopâtre in which the fabled beauty sadistically urges one of her slaves to trade his life for her kiss and gaze. It was beautifully sung and deeply touching.

Then it was on to Le temps d’horloge (Time and the clock), a new cycle of four songs written at her urging by what she called “our greatest living French composer,” Henri Dutilleux. Fleming took as much joy in introducing the cycle as reveling in the final song, a rip-roaring setting of Baudelaire’s “Enivrez-Vous” (Get drunk).

When the audience finally finished applauding Fleming’s sensational postintermission entrance in a black and white gown to die for, the soprano half-whispered into the microphone, “Applause for the dress counts.” It was the kind of endearing moment that erases boundaries between artist and audience.

Aware as she may be of what helps to pay the bills, Fleming was not content to rest on fashion and figure alone. Beginning her set of five Strauss songs with the unfamiliar Verführung (Seduction), whose extremely outward expression of passion caused a scandal at its premiere, she shared thrilling levels of excitement, ecstasy, and intimacy while dispensing her vaunted, soaring highs.

Save for the dismayingly strict time in Freundliche Vision (Pleasant reverie), and a curious line of unfamiliar melody that appeared out of nowhere at the end of Zueignung (Dedication), the set was a triumph.

The recital ended as surprisingly as it had begun, with a sultry, low-voiced rendition of jazz great Blossom Dearie’s Touch the Hand of Love. The soprano, who got her start in jazz, retains her ability to sing American ballads with nary a trace of operatic affectation. What a wonderful ending to perhaps the finest recital Renée Fleming has ever presented here.