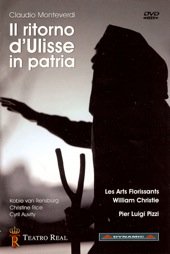 This 2-disc DVD gives the lie to the notion that opera can remain relevant only if the setting is updated to contemporary times. Pier Luigi Pizzi’s historically based, thoroughly modern sets, costumes, and direction for this 2009 production of Claudio Monteverdi ’s Il ritorno d’Ulisse in patria at Teatro Real, Madrid, are so compelling, and the authentic instrument performance by William Christie and Les Arts Florissants is so alive and colorful, that an opera first performed 369 years ago resounds with life and feeling.

As intelligently directly by Matteo Ricchetti for this Dynamic DVD, Jonathan Cable’s new edition of the opera unfolds on a round stage that connects the players to musicians and audience by means of a long, wide stairway that descends from the front of the stage. The sets are sparse — a single bare tree, rocks, a gray sky, an unadorned barge that arises at appropriate moments — and the simple, draping costumes arrest the eye by exploiting the contrast between off-white, gray, black, and royal red and blue. They also exploit the flesh, with several performers, notably the handsome Ed Lyon (singing the role of Eurimaco/Glove) and near–diaper clad Terry Wey (Human Fragility), showing more than enough to keep the eye occupied.

Casting pays equal attention to singing and acting capabilities. Here Pizzi and Christie show their expertise, choosing artists who not only easily negotiate early music’s ornate figures and embellishments, but also look and move their parts. Everything comes together with images so iconic as to drive the compelling humanity of the story deep into the heart.

Heading the cast is bearded tenor Kobie van Rensburg (Ulisse). While he can certainly sing sweetly at lower volumes, van Rensburg intentionally pushes the voice at key moments, allowing it to grow a bit grainy and gruff for dramatic effect. The sacrifice pays off, as the depth of his characterization evokes empathy for the suffering of the long-exiled king. 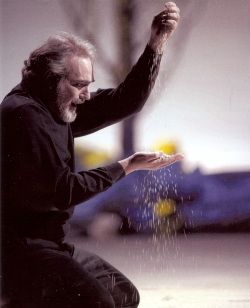 Equally moving is the dry, touching mezzo-soprano of Christine Rice (Penelope), who portrays the loyal spouse who never abandons hope or betrays her marriage vows. As their son, Cyril Auvity (Telemacco) sings in a sweeter tenor, and jumps about the stage with the energy of youth. (Roberto Maria Pizzuto’s choreography is quite effective.) The other characters, from Penelope’s seductive maid to Iro the glutton, both look and sound their parts.

Intelligently edited interviews with Rice, van Rensburg, and Christie cast further light on the production. Rice speaks of ample rehearsal time, and how Christie began preparations by having the singer/actors declaim rather than sing the words. This made especial sense for the character of Penelope, whom Monteverdi restricts almost entirely to recitative for dramatic effect. Van Rensburg stresses the “wonderful humanity” of the characters, and notes that Monteverdi writes so skillfully that he even succeeds in holding interest as five tenors appear together onstage. And Christie explains that, instead of waving a baton, he welcomed the opportunity to play keyboard and allow the musicians to conduct and improvise as they saw fit.

As the Berkeley Festival and Exhibition is set to supplement the seasons of Philharmonia Baroque, American Bach Soloists, and Magnificat with an intense week of some of the finest early-music performances available in this country, this DVD serves as a model of what an intelligent approach to early music can achieve. Bravo.