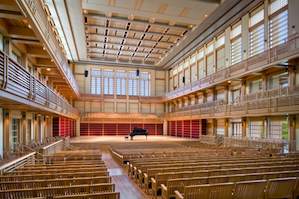 Sonoma’s dream came true last weekend with the opening of the Green Music Center, 14 years in the planning, financing, designing, and building, capped with a two-year breath-holder until a new area resident, the financier Sanford Weill, came in with a $13 million rescue. The all-out gala began with the Inaugural Concert Saturday night, Lang Lang’s piano recital, continuing Sunday with a Sunrise Choral Concert, the Santa Rosa Symphony’s opening concert as matinee, and, in the evening, a popular concert by Alison Krauss and Union Station.

The answer is that Weill Hall is not simply the most physically and acoustically beautiful concert/symphony hall in Northern California, it is also a musical instrument singing forth the finest pianissimos on the piano and fullest sounds an orchestra makes, with a bass response that this orchestra and its audience have never heard before. The sound glows in the ear.

The hall, designed by William Rawn and Associates of Boston, architects of Tanglewood’s Ozawa Hall (which it resembles), embraces the homely wisdom of the shoebox shape and a commitment to wood. Weill Hall is totally clad in blond wood, with much birch, pine, and fir floors, delicate railings, and trimming of windows, the surround balconies and clerestories, even the chairs, with slatted backs for acoustic transparency. The theater consultants were (Leonard) Auerbach, Pollock and Friedlander and, importantly, the acousticians were Lawrence Kirkegaard of Kirkegaard Associates. Their work is so fine that if you put your hand on the floor when the orchestra is producing significant sonority, you can feel the vibrant response — in the wood. I heard Lang Lang’s piano from a row near the rear and the Symphony from midhall, to equal effect.

One other thing: On Saturday night, the audiences numbered 1,400 in Weill Hall and, with its back wall open, 2,000 more seated on the lawn at tables and beyond; that was later reported as 3,040 total. On Saturday afternoon, the attendance was the 1,400 plus 2,800 under a blazing sun with temperatures in the high 90s (800 people at tables and 2,000 on the lawn), later reported as 4,200; and for the evening pop concert, 4,533. A colleague reported that those outsiders could really hear the music.

Weill Hall is not simply the most physically and acoustically beautiful concert/symphony hall in Northern California, it is also a musical instrument …

Lang Lang, chosen and supported by Sanford Weill to inaugurate the hall named for the philanthropist, produced a program clearly chosen to illustrate dramatically the hall’s capacities. (He had tested the hall in January.) The first half was Mozart, the piano sonatas Nos. 5, 4, and, the best-known and most expansive, No. 8, in A minor, KV 310. Deliberately and perhaps untypically, Lang Lang played them down, in Romantic fashion to be sure, with sensuous phrasing and tapering, expressivissimo. Playing at the intimate level, dynamics were reduced to the minimum, as soft as the piano can be brought to speak and, of course, reflecting his command. And, wondrously, the sound bloomed as if we were in a small chamber. Performed with minute care, these were still devised interpretations, the best being the A minor, its robust quality asserted and retaining its unfazed self.

Panache to the Max

In the second half, Lang Lang demonstrated his celebrated virtuosity and displayed how the Chopin Ballades, Nos. 1 through 4, could be exploited to the maximum in tempo and dynamic contrasts, in retards, accelerandos, and rubatos, all showing how much a piano could work the room. And, of course, proving that he could play the cascades, roulades, and ripping scales faster and with more panache than anyone else. Whatever Chopin traditions had been set by Artur Rubinstein and the other greats went out the window. Ah, well … the audience went for it, hands up, and Lang Lang responded with a more genteel performance of Chopin’s Nocturne in E Flat, and the Minute Waltz (in perhaps 40 seconds?). Lang Lang announced that this was the first time he had performed any of this program.

After his fireworks came a 25-minute experience of the real thing: The Sonoma skies, frighteningly close to the venue, lit up with the most inventive and dazzling display in my experience.

Sunday’s Santa Rosa Symphony matinee program was the classic one featuring the orchestra’s two previous conductors and the current one. Corrick Brown, the conductor for 38 years, led Beethoven’s Consecration of the House, Op. 124, a piece elegantly balanced, not showy, eliciting the warm sound that has come to typify “symphonic music,” thus initiating the house appropriately. Brown conducted a clear, generously paced, and attractive performance. Already, the sonority of the six string basses affirmed the difference this hall will make to an orchestra that has spent its 84 years in the acoustic doldrums. In spite of that, it has become a leading regional orchestra in Northern California, annually performing seven programs of three performances each, plus single special concerts, to a substantial and loyal audience.

The Santa Rosa Symphony has become a leading regional orchestra, annually performing … to a substantial and loyal audience.

Jeffrey Kahane, Santa Rosa’s conductor from 1995 to 2006, was the soloist in Beethoven’s Concerto No. 4, in G with Bruno Ferrandis, Kahane’s successor in 2006, at the podium. This had different qualities than Kahane’s performance of the Fourth Concerto, which he conducted from the keyboard, a number of years ago. The meditative, reflective qualities in the piano introduction and the slow-movement piano/orchestral confrontation may have been as thoughtful and intimate, but in the outcome of that dialog and the Rondo, Kahane was unusually assertive, playing deep and strong into the keyboard, and pushing tempo insistently in the faster elements of the finale. Ferrandis was a good partner, shaping the orchestra in its role very sympathetically. 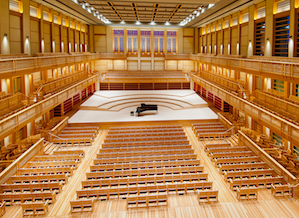 Next came the Sonoma Overture, commissioned for this event of Nolan Gasser, a composer with a major role in Internet music and a Sonoma resident. Of its first five minutes — much motion and no movement — I could only think of Maurice Ravel’s bemused description of his own Bolero, the famed applause machine that concluded this concert: “Fifteen minutes of music and no music.” But perhaps it was that Gasser had written his way into the piece, because after five minutes of string “scrippying” and some chimes, the tuba and then the rest of the brass section produced interesting musical ideas and Sonoma Overture finally developed a line with some strength and profile to the end. It might well be a musical description of the history of the Green Center project.

Aaron Copland’s Canticle of Freedom (1954) then came on, a seldom-performed 14-minute piece of outward public music, wholly in the Copland manner. After a long, eloquent orchestral statement, a chorus composed of the Symphony’s Honor Choir, the Montgomery and Santa Rosa High School Chamber Choirs, and the Sonoma Bach Choir, arrayed in the balcony above and behind the orchestra, sang firmly and confidently. The text was a few phrases repeated manifold times, the first being “Freedom is a noble thing,” and the others obviously in the same spirit but not intelligible. Forward to a big close. Ferrandis conducted this magisterial inaugural musical rhetoric well.

Finally, the Bolero, a big virtual dance and a musical hug for the audience. But hold on … to cap it, Ferrandis added Johann Strauss Sr.’s Radetzky March, and now all the clapping was in unison. As well it should have been for this Sonoma success.