Best known in recent years for his willingness to explore a broad variety of postmodern musical styles and cultures, on Thursday night Yo-Yo Ma graced the stage of the Mondavi Center at UC Davis with a program of J.S. Bach’s unaccompanied cello suites, a return to the repertoire that he cut his teeth on. 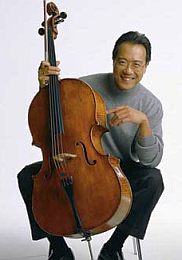 I first heard Ma bring his considerable talents to Bach’s solo suites in a recital he offered in the early 1980s, well before he began to explore territory outside the mainstream concert repertoire. His approach at the time clearly reflected the influence of the Rose/Galamian style of playing that he had been trained in, which cultivates a rather uniform and uninflected type of articulation that I’ve never cared for, but I remember being struck by his quirky, idiosyncratic approach to rhythm and color as he navigated the intricacies of these wonderful pieces. Although Ma spoke with a very different dialect, the improvisatory quality of his playing reminded me of Anner Bylsma’s, whose eye-opening period-instrument recordings and live performances of the cello suites were just beginning to make a splash in this country at the time.

In the years since, Ma has collaborated with a spectrum of bluegrass, jazz, and various “world-music” artists for whom improvisation in the course of performance is taken for granted, though Ma’s parts are usually memorized or written out. While he admits to being reluctant at first, as conservatory-trained musicians generally are, his colleagues have coaxed and cajoled him into trying his hand at improvising during their performances, and he appears to be gradually finding his stride. While there was no actual improvising in Ma’s performances of Bach on Thursday (only a few brave souls have explored that territory), the improvisatory quality of his playing has developed much further, presumably as a result of his work in other genres, and his willingness to take risks continues to be one of the great strengths of his approach.

Earlier in the day, Ma offered a master class that served as a showcase for three exceptionally talented young cellists. As one might expect, Ma, justly famous for his magnanimity, was generous in his praise for these youthful musicians’ achievements and offered plenty of practical solutions, yet his most valuable contribution was his advice to keep an open mind, to resist settling on a single interpretive decision, to continually explore new avenues of expression.

An intuitive performer, Ma has forged a career that is an object lesson in the value of such an approach, and when his instincts serve him well, the results can be stunning. Nonetheless, while I have always appreciated his sincere geniality and the sheer joy that he projects while performing, I have often felt that something was missing. Ma is simply not a deeply analytic musical thinker, and in Bach’s music there are times when his intuitions lead him astray. I recall a master class on the Bach suites in which Carl Schachter, the well-known Schenkerian theorist, and Ma attempted to share their insights. Schachter would point out a hidden motivic idea or voice-leading problem and then ask Ma how he might interpret the idea in performance. Ma’s responses would have served him well on a Sunday morning talk show: He would invariably play through the passage once or twice and then talk in a most appealing way about a fingering or bowing he felt was most comfortable or the tone-color he thought was prettiest, more or less ignoring Schachter’s question in the process.

As many of his fans know, Ma’s forays into “foreign” musical subcultures have included a stint performing with Ton Koopman’s period-instrument orchestra, in which he set up his “Duport” Stradivarius with gut strings and used a Baroque bow. Although he has spent much of the past decade performing and recording Bach and Haydn on gut strings, which would have worked well in the fine acoustics of the Mondavi Center, Ma chose to use a modern bow and a steel-string cello for his performance there. In fact, there was little in his approach to suggest any substantial influence from his experience with Koopman, though he did move his right hand up to approximate the balance of a period bow, and he tuned his cello a bit lower than normal, apparently in order to lessen the tension of the steel strings and draw more resonance from his instrument.

Risk Takers to Be AdmiredAfter Ma’s performance, I found myself thinking about parallels with Mel Gibson’s interpretation of Hamlet or Yehudi Menuhin’s collaborations with Stephane Grapelli. Although the aesthetic results are inevitably mixed in such endeavors, I have tremendous respect for any musician, actor, or artist willing to take the risk of venturing out of their native territory and attempting a fusion or synthesis of disparate styles. Members of the early music world are quick to point out that, while Ma experimented with the hardware and sounds of Baroque instruments, he never delved deeply into the cultural languages and styles of which they are manifestations. That said, as in so many of Ma’s collaborative endeavors, part of his appeal lies in the distinctively original personality that he retains, drawing on his native Juilliard-trained experience, in contrast to the “foreign” culture of the period-instrument world.

There was an interesting, if not always satisfying, hybridity in Ma’s interpretive decisions. In the prelude to the G-Major Suite, which opened the program, he generally stuck to the bowings indicated in most of the original sources, which are rather awkward on a modern steel-string cello, and I was impressed with how well he made them work. By contrast, in the dance movements he would often use old-fashioned, Fournier-style slurs between beats, which tended to blunt the lilting dance qualities of the movements, especially when employed between the opening pick-up and downbeat of a phrase.

In the C-Minor Suite, which is most clearly in French style, rather than taking advantage of the resonant scordatura tuning that Bach calls for, as virtually everyone does these days, he stuck to the old-fashioned practice of rearranging the piece for a normal tuning in fifths. As a result, chords had to be thinned out, and he was forced to play large portions of the piece in the muddier upper register of the D string. Nonetheless, I thoroughly enjoyed the way he tossed off the improvisatory written-out embellishments in the Allemande, only to be disappointed when he would resort to a stentorian grinding-out of scale passages moments later. Ma has a tendency to jump rather breathlessly from one phrase to another, but I enjoyed the stylish rhythmic flexibility of his approach to this suite, which for the most part was in keeping with French practices of the time.

The C-Major Suite, which concluded the program, was a similarly mixed bag. The Sarabande lacked a clear sense of harmonic rhythm and generally didn’t make much sense to me, but I liked his playful Allemande, and the Bourrées were suitably jaunty. The Gigue was given an impressively virtuosic reading, clearly calculated to bring down the house — which it did.

In his autobiography, the great Russian cellist Gregor Piatigorsky tells of meeting Pablo Casals for the first time, during which Casals asked him to play some solo Bach. Piatigorsky obliged, but was not at all satisfied with his own playing and, when Casals responded with applause and compliments, felt certain he was being mocked. When he confronted the maestro about this, Casals assured him that he was being quite sincere, that though there may have been some technical problems here and there, he had learned much from Piatigorsky’s performance, that he had discovered new facets of Bach’s music. Although I have quibbled about a few things I felt were lacking, Ma’s genial performances on Thursday were extremely satisfying and, for anyone with an open mind, offered plenty of opportunities to discover new facets of this fascinating music.