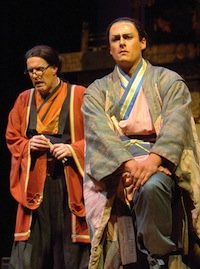 You’ve seen Gilbert and Sullivan’s The Mikado several times and don’t think another viewing beckons when — bother! — along comes the Lamplighters’ and it’s all fresh and like new. The opening night of the series, in Walnut Creek’s Lesher Center last Friday, might have been the fifth, it was that smooth; but then, that’s what the Lamps do, and have been doing for 60 years.

The production has always turned on two premises: a director with a light and fantastical touch (here, Jane Erwin Hammett) and principals who step up to the challenge of their great predecessors by bringing new, delightfully engaging personalities to give a different flair to the old favorite. You may cherish memories of Gilbert Russak’s Ko-Ko, but here comes F. Lawrence Ewing with a wholly different, mercurial, slippery take on the Lord High Executioner-in-spite-of-himself. And hello Sonia Gariaeff, a Katisha not to outdo the imperishable June Wilkins, but to contrast, big time.

First, a word about design and words. Ric Tringali has created a (literally) simply beautiful set in a nice Asian manner, the central unit being a temple useful for clever ins and outs, surmounted by a characteristic lion’s head, with a matching throne unit next door. Beaver Bauer’s costumes are pleasing, colorful, and subtle. The Mikado’s get-up, as an example, is vastly more effective than the Mikado-caricature done for the unfortunate Sarastro in the San Francisco Opera’s recent Magic Flute.

And supertitles were used. Cast diction was perfectly good, though the projections helped immeasurably in catching such trouvailles of W.S. Gilbert’s as “You very imperfect ablutioner” (to rhyme with “executioner,” of course) and “She’ll toddle away, as all aver …” and updated lines in Ko-Ko’s “I’ve got a little list.” I don’t recall being so amused before by G&S’ private joke of tucking in a sea shanty against Nanki-Poo’s “A wand’ring minstrel I.”

Too bad that G & S isn’t an Olympic category; the Lamps would have a good shot at the gold.

Ewing’s Ko-Ko was ever so wily and enchanting a con man, with fine delivery of Ko-Ko’s great numbers like the terrific takeoff on the operatic “willow song,” and with sleek moves, really danced. The love-couple was Robert Vann, a gracious Nanki-Poo with his pleasing, light-voiced tenor, and Lindsay Thompson Roush, a Yum-Yum with a smooth, free, and lovely soprano, delightful in the supermodel song, “The moon and I.” 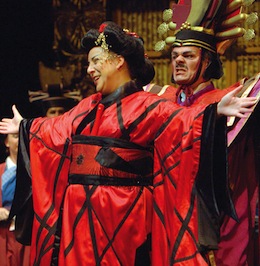 Gariaeff was a delightfully dominating Katisha, coming on first in a witch’s hair-do. She took over the show toward the end, barreling out “There is beauty in the bellow of the blast,” at her heavy-mezzo best.

Robby Stafford made out as a charming Pooh-Bah, Lord High Everything Else, with a warm, easy baritone, and Wm H. Neil made appealing even the brief severities of the Mikado’s, in a deft and charmed portrayal, his bass voice rich and focused. John Melis was the nobleman Pish-Tush, with his handsome baritone voice, Molly Mahoney was excellent as Pitti-Sing, and Talia Levitan right with her as Peep-Bo.

Musically, everything was smooth and melodious, thanks to the agile, exact, and light leadership of the conductor, Monroe Kanouse, all in an easy flow and balance (full disclosure: he’s a colleague and friend of mine of 60 years). The chorus was fine and true, while the Lamplighters Orchestra, all dependable familiars, was on the money. Too bad only that G & S isn’t an Olympic category; the Lamps would have a good shot at the gold. However, consolation: The Mikado is playing this weekend in the Napa Valley Opera House, and weekends thereafter in Mountain View, San Francisco’s Yerba Buena Center for the Arts, and evermore-in-Livermore.