Long before composer Philip Glass' latest bevy of fans alighted on Planet Earth, scores of people filled Radio City Music Hall to witness the 1982 premiere of Godfrey Reggio's multiple award-winning film, Koyaanisqatsi. There, the brilliant mating of increasingly frenetic, hellish images with Glass' constantly accelerating, intentionally maddening repetitions provided a visceral experience of life out of balance. But in "Life: A Journey Through Time," a Festival del Sole benefit for the Land Trust of Napa County and other conservation organizations, the mating of the composer's music with concepts and images by Frans Lanting amounted to little more than a soporific travelogue.

Any number of possible reasons can be given for the disappointment. From a musical standpoint, the movie score is not original. Instead, Glass pieced together its seven sections from works composed for smaller ensembles or solo instruments. He then enlisted his longtime collaborator Michael Riesman to arrange them for orchestra. (The works are from scores to The Secret Agent [1996], Dracula [1999], Cocteau's Les Enfants terribles and La Belle et la bête, Glass' "Shorts" collaboration [2001] with various filmmakers and artists, and Orion [written for the Athens Olympics in 2004].) The resulting pastiche may be echt Glass in its most lively, colorful, and cliched sense, but it does not possess the cutting brilliance of the score to Koyaanisqatsi.

Then there was the acoustic. When "Life: A Journey Through Time" (hereafter referred to as "Life") was produced and premiered in 2006 by the Cabrillo Festival of Contemporary Music, conductor Marin Alsop had at her disposal a live, if slightly uncontrolled, expansive acoustic in which the brilliant and percussive aspects of Glass' musical pastiche undoubtedly made their mark. (I did not attend, but I did hear Alsop conduct Glass' Symphony No. 8 last year, to wonderful effect.) Here, conductor Carolyn Kuan was faced with the Lincoln Theater's far more deadened acoustic, where a distinct lack of reverberation diminished the impact of the Napa Valley Symphony. True, it was certainly pretty, and at times beautiful. But so is the view.
Welcome to Fujiland
Then there were the images. Frans Lanting, whom the program calls "one of the great nature photographers of our time," seems to prefer a color-saturated palette that has far more in common with Fuji film than the great outdoors. Imagine Carmen Miranda dressed as an amoeba in Busby Berkeley's three-strip Technicolor masterpiece The Gang's All Here, and you'll get the picture. (If you don't know the reference, you must see this film on the big screen. It's one of the seminal masterpieces of 20th-century cinematic camp.) 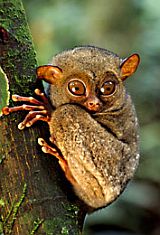 Don't get me wrong. Lanting's images are always lovely. The photos of chimps and other primates, with wide eyes staring at the camera, are especially touching, and surfaces and textures are often compelling. But the huge chasm between the actual color of these creatures and landscapes and what "Life" presented rendered nature many steps removed. "A testament to the magical beauty and enduring miracle of life on Earth" "Life" is not. It's far more about how Lanting chooses to portray the natural world.

Visual designer Alexander V. Nichols went only so far. Dividing the insufficiently high and wide screen behind the symphony into three parts, he variously filled all three screens with the same image, moved images from left to right, and displayed three different images at a time. At his most imaginative, Nichols superimposed two images atop each other, moving one up and the other down. For those who were raised on computer animation, or who witnessed the brilliant, moving imagery that accompanied Berkeley Opera's recent double bill triumph of Bluebeard's Castle and L'Enfant et les sortilèges, this was tame stuff indeed.
Far Niente Is Far Out
Festival del Sole is as much about food and splendor as it is about music. If "Life" left me wanting the real thing, Festival del Sole's spectacular postperformance gala dinner at Far Niente Winery in Oakville more than filled in the gaps. Under a large white tent facing an elegant fountain and the winery's idyllic headquarters, with well-tended fields behind and around, a privileged group (including my spouse and me) experienced a sumptuous meal, fabulous beverages, and enough dairy appetizers and desserts to drain as many udders as they destroyed waistlines. 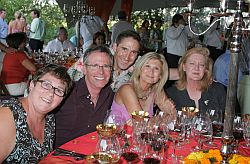 A table full of glasses in the Far Niente tent

Though hardly a wine connoisseur, I give the 2005 Far Niente Dave Collection Chardonnay a 10. The husband preferred the 2005 Far Niente Estate Bottled Cabernet Sauvignon. By the time we got to the perfectly balanced, sweet 2003 Dolce dessert wine, critical faculties had gone the way of George Bush's commitment to the environment.

Special thanks to publicist Mona Baroudi, Festival cofounders Barrett Wissman and Richard Walker, and dinner cosponsors Far Niente and Darioush wineries. Be assured that all present experienced an object lesson in the blessings that one's short sojourn on Planet Earth can provide.