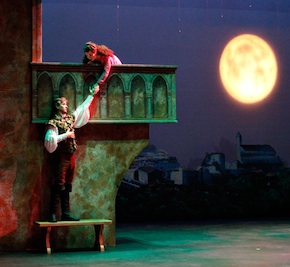 At the start of its 20th anniversary season, Livermore Valley Opera deserves commendation and gratitude. Serving, as it were, as the greater Bay Area’s last outpost of the fine arts, the company serves up its twice-annual performances in the laudably live, verging on the bright, acoustic of the Bankhead Theatre. The location, positioned at the end of a large, spacious courtyard that forces evening operagoers to exit past any number of late-night partyers and bars that mix alcohol with jarring amplified music, could serve as a metaphor for a cultural oasis poised at the edge of the Wild, Wild Nuclear West (a.k.a., the abyss).

Following up last season’s excellent production of Madama Butterfly, the Livermore Valley Opera has ventured into more risky territory with a credible performance of Gounod’s infrequently mounted Roméo et Juliette. (The opera repeats on September 25, Oct.1, and Oct. 2.) The risks are spelled out in part in Stage Director Bill Murray’s “Insight” in the program guide. Murray acknowledges that Roméo et Juliette “represents the expected.” Noting that its plethora of duets are “static though beautiful,” he admits that Gounod’s Faust “succeeds where Roméo et Juliette fails: better character definition and a more organic development of story.” All of which is to say that it was up to the singers, conductor, director, and production to make a less than riveting five act opera, known principally for two wonderful arias, into something worth sitting through. 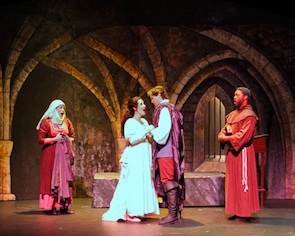 LVO scored big by engaging soprano Christie Hageman, Miss Montana 2006, as Juliette. Once her voice warmed up, Hageman displayed an estimably large and well-focused instrument with a lovely timbre, perfect trill, and soaring top. Though her famous Act 1 Waltz Song, which came before her voice had settled in, lacked buoyancy — conductor Alex Katsman’s plodding tempo did not help — her portrayal grew increasingly secure and tender as the act progressed. Hageman’s lovely bearing and sympathetic countenance could serve as a model of French grace and restraint.

More problematic was tenor Christian Reinert’s Roméo. A tall, handsome man with a big dramatic voice, Reinert displayed a dismaying tendency to swell into notes after initially hitting them softly. This might not have been a problem had his voice been steady and even, but in this performance it was not. As the voice opened, the vibrato widened and the tonal balance shifted markedly. Far too many single notes sounded like they were actually two, repeated at roughly the same pitch. Needless to say, this took a major toll on his legato. As admirable as was Reinert’s attempt to soften on the final note of his one famous aria, “Ah, lève toi soleil,” the performance and most of his scenes fell flat. 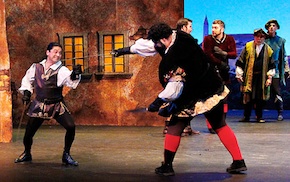 Part of this was due to his bearing. Although the program bio does not say that Reinert trained in ballet, his dismaying tendency to spend too much of his time standing perfectly erect and virtually still with his feet turned out and arms hanging passively at his side did not help animate the opera. His best scene, which aroused a fair share of tittering in the audience, found him stripped to the waist, leaning over a clothed Juliette in what passed for post-coital passion. Was director Murray unable to do anything more with him?

Despite the efforts of Fight Director Carla Pantoja, fight scenes and interactions were sometimes stilted, but they were as well in San Francisco Opera’s Heart of a Soldier. Hats off to Murray for taking advantage of Alvarez’s large abdomen to have him bump the much shorter and slighter Gomez around before killing him.

Where Are the Lights? 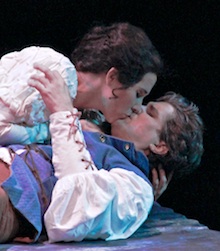 Never once in the production did the stage lights come up full, not even in what passed as daylight. Far too often, singers were left in semi-darkness or worse, without a spot to light their features. Key scenes and arias went by without the ability to clearly make out facial expressions. This did not help the opera’s admittedly arrested character development.

I suppose Light Designer Kevin Bautch chose to bathe everyone in funereal yellow light at the Act 1 opening masked ball in order to simulate candlelight, but the results completely washed out the colors in Hannah Phillips-Ryan’s costumes. Phillips-Ryan clearly put a huge amount of effort and imagination into clothing everyone differently, and enhancing ballgoers’ appearances with some delightful accessories. What a shame that her efforts could not be fully appreciated.

Katsman’s orchestra played well, producing luminous tone in interludes. How much of the lack of energy in duets and some solo numbers was due to singers’ limitations, conducting, directorial lapses, or lighting is open to conjecture.