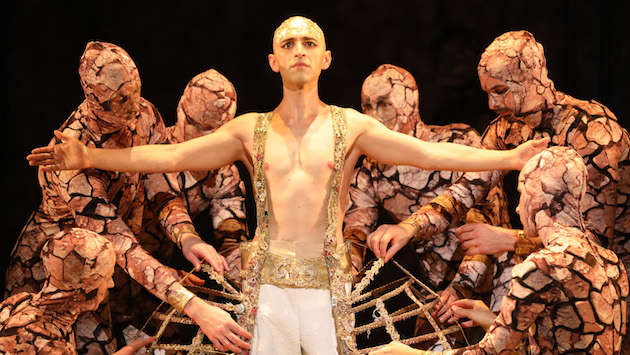 The year Philip Glass’s meditative, minimalist opera, Akhnaten had its world premiere in 1984, Ronald Reagan was America’s president and no one had ever heard of a smart phone.

A span of 33 years separate that premiere at the Stuttgart State Opera in Germany and the eye-dazzling production of Akhnaten that Los Angeles Opera unveiled Saturday at the Dorothy Chandler Pavilion, a production that can only be described as visionary. 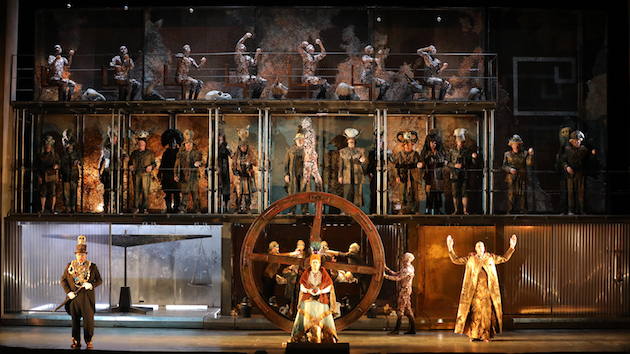 The accolade “must-see” is greatly overused. But in the case of L.A. Opera’s Akhnaten, it is the only way to properly describe the production’s musical and visual impact. This, the third of Glass’s “portrait operas” (following Einstein on the Beach in 1975 and Satyagraha, about Gandhi, in 1980), is about the pharaoh who ruled 18th Dynasty Egypt (1375 B.C. – 1358 B.C.), and introduced the first state-sponsored monotheistic religion. 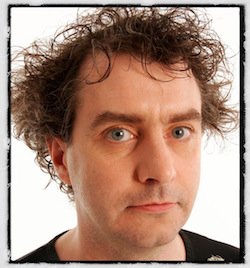 The production, which had its premiere in March at the English National Opera, is directed by Phelim McDermott with a remarkable combination of sculptural subtlety and circus-like flair. It features towering sets and stunning, minimalist vistas by Tom Pye. The eye-walloping, period-melding costumes are by Kevin Pollard, with lighting by Bruno Poet.

McDermott, in his production of Satyagraha several years ago (at the Royal Opera and the Metropolitan Opera), showed his ability to theatricalize Glass’ huge structures while at the same time elucidating their meaning. He has done it again here, with a show that, like Satyagraha, uses ancient languages (though there is some English in Akhnaten).

To take one example, only, juggling plays an important role in the staging of Akhnaten, executed superbly by a troupe of 10 performers imported from the London production. The art of juggling has been traced back at least 4,000 years. There are Egyptian hieroglyphics that depict people juggling balls. 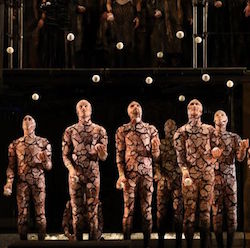 According to Sean Gandini, who choreographed the succession of flying balls and waffling clubs, “In some ways, the objects are alter-egos to the character’s ideas; miniature globular deities, bouncing thoughts, desert sand. On another level, the juggling has a structural relationship to Glass’s score. We have tried to make the patterns relate to the music and create a dialogue with it.” Cirque du Soleil, eat your heart out.

The production is conducted by L.A. Opera’s artist-in-residence Matthew Aucoin, and marks his first appearance at the Dorothy Chandler Pavilion. It is also the first time the L.A. Opera orchestra has ever taken on an opera by Philip Glass. (The musical ensemble for Einstein on the Beach came and went with the production).

There are those who believe that, because Glass’ minimalist formula appears to be simple, with its repetitions of arpeggiated phrases and modulating instrumentation — from trilling flutes to pounding percussion — it should be simple to perform. It is not. And on opening night Aucoin and the orchestra were still in the process of coming to terms with the dynamics of Glass’ score.

When it was good, it was very good. When it was not, the threads that bind the score together began to unravel and fray at the edges. But if this was a trial by fire, they passed through it and can only gain strength in the upcoming performances. In contrast, Grant Gershon, who has conducted many pieces from the minimalist repertory as head of the Los Angeles Master Chorale, molded the opera’s large chorus into a powerful, synchronous unit.

The opera is divided into three acts. The opening scene depicts the funeral of Amenhotep III Akhnaten’s father and introduces Akhnaten’s mother, Queen Tye (Stacey Tappan) costumed as a stately British dowager; the pharaoh’s principal advisor, Aye (Patrick Blackwell) who rather resembled a voodoo priest in a black suit with a human skull affixed to his top hat; and Akhnaten’s wife-to-be, the beautiful princess, Nefertiti (J’nai Bridges) who was every bit as regal as the famous statue.

As Amenhotep is prepared for his voyage to the land of the dead, his young, decidedly androgynous son, Akhnaten (countertenor Anthony Ross Costanzo) undergoes a metamorphosis from a naked pupa to a gloriously bejeweled butterfly whose radiance is accentuated by the glowing disk of the sun.

Costanzo captures perfectly the other-worldliness and sexual ambivalence of Akhnaten. He has a strong, bright voice that melded beautifully in his duets and trios with Tappan and Bridges. Unfortunately, in his major aria, the “Hymn to Aten” (which is sung in English) his diction was not sufficient to convey the meaning in a production that does not employ supertitles. Impressive diction was never a problem for Zachary James who presented a towering presence as the opera’s English-speaking narrator/Bcribe.

In a fascinating juxtaposition of styles, the almost frenetic visual scheme of the densely populated first act gives way in Act II to scenes of pure, sculptural minimalism. A stately love duet for Akhnaten and his bride features the couple entering from opposite sides of the stage draped in yards of red fabric. One stately step at a time they gradually move toward one another until their lips and fingers meet. Then the young Pharaoh ascends the throne set against an enormous glowing sphere representing the sun and the moon. 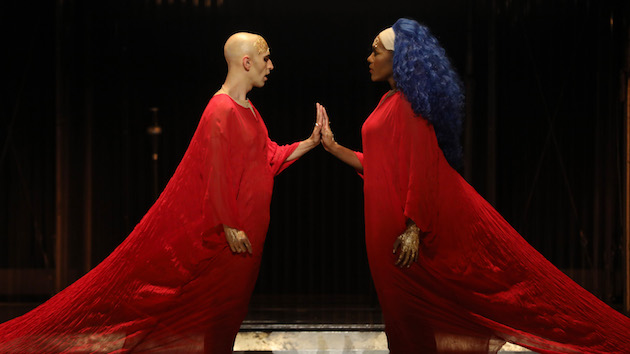 Like that other “Sun King,” Louis XIV, who erected the grand palace of Versailles essentially to glorify himself, Akhnaten erected an entire city dedicated to himself, Akhetaten. Sadly, this glorified retreat for himself and his family of five daughters, combined with his total disregard for his people (and an eye to his enemies) sowed the seeds of his ultimate downfall after a reign of only 18 years. A touristic view of his reign from our modern-day perspective provides the final scene of the opera.

Whether Akhnaten’s creation of a monotheistic religion was an act of godliness or a maneuver by a power-hungry egomaniac is debatable. The opera, however, tends toward godliness, and portrays Akhnaten as a revolutionary figure who ultimately was executed and all but obliterated from history.

Whatever view we ultimately take of Akhnaten, the opera continues to stand on its brilliant score and depth of vision, only accentuated by this stirring production.