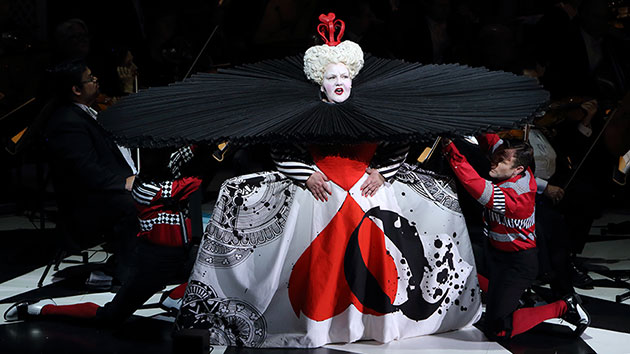 It's a safe guess that most Americans know Lewis Carroll's novel Alice's Adventures in Wonderland through the Walt Disney Studio's animated film, which has become a classic of its own.

Friday, 64 years after the release of the Disney film, the Los Angeles Philharmonic and conductor Susanna Mälkki performed the West Coast premiere of Unsuk Chin’s operatic treatment of Alice in Wonderland on the stage that bears the animator’s name. Part of the orchestra’s in/SIGHT series, it is an example of how the orchestra pushes the envelope in order to create exciting artistic collaborations and attract new audiences.

Walt Disney saw Alice and its fantastical cast of characters as prime material for cartoonification. The South Korean-born composer Chin and her librettist, playwright David Henry Hwang (M Butterfly), took a very different approach. Their Alice is anything but cuddly. It views the story through a contemporary lens darkened by the madness of two world wars, the desolate dramas of Samuel Beckett, and the atonal atmospheres of Györgi Ligeti.

Chin and Hwang bookend Alice’s adventures with a pair of dream scenes (scored for low strings and gongs), which present a shadowy opening and a somber, ambiguous finale to the opera. Wonderland itself becomes a labyrinth of dreams within dreams, while Hwang’s libretto takes lines directly from Carroll’s text then adds contemporary references and jazz-like riffs on their themes, which are mirrored by references in Chin's music.

Ligeti, with whom Chin studied, is palpably an influence on her style, particularly, in this work, in the orchestration. The instrumentation is vast, including a veritable battery of percussion instruments, plus bird and pea whistles, vibraslap, car horn, an alarm clock, and something referred to in the program as “kitchenalia.”

Each of the seven episodes: “The Pool of Tears,” “In the House of the White Rabbit,” “Advice from the Caterpillar,” “Pig and Pepper.” “A Mad Tea Party,” “The Croquet Ground” and “The Trial or Who Stole the Tarts” is given its own orchestral vocabulary. The effects vary considerably from enormous, sweeping, dissonant waves, to spiky, raucous humor. There are also sections where the voice of a character is reduced to a single solo instrument, most notably the extended solo for bass clarinet (David Howard), which represents the “voice” of the Caterpillar.

Had things gone as planned, Kent Nagano would have conducted the world premiere of this version of Alice for the Los Angeles Opera (which had commissioned it) as part of the company’s 2005-2006 season. But financial setbacks forced the production's cancellation. So Nagano took the project to the Bavarian State Opera, where it was premiered as part of the Munich Opera Festival in 2007, staged by Achim Freyer.

Five years went into the preparation of this new staging of Alice in Wonderland (according to Chad Smith the Philharmonic's vice-president of artistic planning). It required the construction of 100 elaborate costumes; four-and-a-half weeks of rehearsals for the soloists and choruses, and, of course, onstage rehearsals with the full orchestra.Susanna Mälkki led a stunningly conceived performance that featured a cast of 17 singers, members of the Los Angeles Opera Chorus, and the Los Angeles Children’s Chorus … eye-popping costume designs, and real-time video animation, all created by director Netia Jones.

The work paid off. Mälkki led a stunningly conceived performance that featured a cast of 17 singers, members of the Los Angeles Opera Chorus, and the Los Angeles Children’s Chorus. Ingeniously configured to fit the limited space of the Disney Hall stage, the production included eye-popping costume designs, and real-time video animation, all created by director Netia Jones.

Jones’ video segments cleverly integrated the singers into the two-dimensional world of the projections, as if they were appearing in the pages of an enormous book. The look of the production was dominated by Jones’ costume designs and her animated treatment of British cartoonist Ralph Steadman’s edgy, pen-and-ink illustrations.

Chin's score successfully defines the colorful and strange characters of Wonderland in a newly-minted theatrical context, which gives them a much more contemporary identity and requires performers of extraordinary ability and creativity. She asks for extreme vocal acrobatics from the characters, both in range and complexity of their lines.

In the role of Alice, soprano Rachel Gilmore was superb, with clearly defined high notes, a believable sense of wonder, and feisty intensity. She was more than up to the task of sparring with Carroll’s roster of Wonderland characters. Countertenor Andrew Watts sang brilliantly the role of the hyperactive White Rabbit as well as the hypercritical March Hare. Marie Arnet was all glitz and glamour in russet-colored fur as a Julia Roberts-style Cheshire Cat. Dietrich Henschel was a decidedly Mad Hatter costumed like one of Samuel Beckett’s tramps from Waiting for Godot. But it was Jane Henschel who trumped them all as the beautifully irrational Queen of Hearts. Her commanding Brünnhilde-esque soprano and persona were just right in a role which can hardly be overdone.