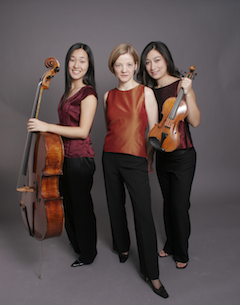 Trio Cavatina is a piano trio consisting of three young women. Pair them with violist Samuel Rhodes, late of the Juilliard Quartet and father of Cavatina violinist Harumi Rhodes, and you have a piano quartet. This combination is what played for Music at Kohl Mansion in Burlingame on Sunday.

The repertoire consisted of three lesser-known pieces by three well-known composers, Beethoven, Brahms, and Copland. The Beethoven offering was his first officially published work and the only actual piano trio, instead of quartet, on the program. His Trio in E-flat, Op. 1, No. 1, is usually overlooked in favor of the darker and more experimental No. 3. No. 1 turns out, however, to be the more enjoyable piece to listen to — which is probably why Beethoven himself preferred No. 3.

Tuneful and lively, it sounds a lot like Mozart in the grace and sparkle of its first two movements in particular. The finale, jumpier and more jokey, is more like Haydn. Especially in the first movement, there are occasional outbursts recognizable to the latter-day listener as characteristic of the Beethoven to come.

Trio Cavatina played this work with lightness and joy which became more outgoing as it went along. Little digs in the scherzo, and a distinctive leap in the piano in the finale’s main theme, almost anticipated the Copland to come.

The evening belonged, however, to Brahms. His Piano Quartet No. 3 in C Minor, Op. 60, is one of his darkest and stormiest works. He suggested to his publisher that the score should be issued with his portrait on the cover with a gun pointed to the head (prefiguring a famous National Lampoon photo of a dog). It, too, is a fairly early work, earlier than its opus number would suggest.

Here was a riveting, intense performance, especially in the middle two movements. Pianist Ieva Jokubaviciute abandoned the gentle sound of the Beethoven and the softer accompaniment sections of the Brahms to emit thunderous chords in the scherzo, leading her colleagues on a wild journey. 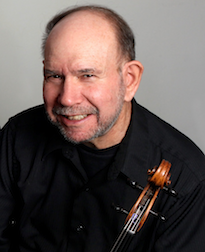 Copland’s Piano Quartet, by contrast with the others, is the first work of his late period. This 1950 composition was the composer’s first experiment with the serialist music that would occupy much of his attention over the next two decades. At this early stage he doesn’t seem to have been taking it entirely seriously — surely it isn’t coincidental that he begins one of his tone rows with the opening notes of “Three Blind Mice.”

Listeners in search of the tunefulness of Copland’s earlier populist music won’t find it here. They will find, however, much else of the typical Copland manner. Serialism didn’t negate his characteristic style, at least not yet. The fast middle scherzo of the Quartet has much in common, in complex rhythmic exchanges and erratic motifs, with that larger chamber composition, Appalachian Spring, while the slower outer movements of the Quartet bear some resemblance to the other work’s pastoral frame.

Instead of maximizing this family resemblance, however, Sunday’s performance seemed to find more of a kinship with Brahms. This was a dark and serious performance of the Copland. There’s a section near the end of the scherzo where the composer seems to be inviting the musicians to kid around: There was no kidding here, and little attempt to accept the composer’s invitation for grinding and growling either. Ponticello, harmonics, and other high-pitched sounds they could emit, and Jokubaviciute’s knack for making the piano sound glassy when Copland issued that instruction carried over to some of the long-held pregnant solo chords in the Brahms as well.

The three members of the trio have what most chamber ensembles strive for though not all succeed at achieving, a uniform stylistic approach. By these standards, having Samuel Rhodes play with them could be problematic, because of what appeared to be a generation gap in styles of playing. Though it was partly a difference in tone quality, it was also an aesthetic matter. To say that it was a case of prioritizing precision in the younger generation and expression in the older would be oversimplifying and misleading. I can’t think of a better way to put it, though.

This created some problems in the Copland, when the instruments traded motifs around, or the viola wandered one way while the violin and cello went the other in the thick polyphony. It came together, however, in the Brahms, especially in the slow movement. Cellist Priscilla Lee’s opening melody was no less expressive for being note-perfect; subsequent sighing motives for Samuel’s viola and Harumi’s violin together had the grace and courtesy of a father-daughter dance, for all that the dancers were doing totally different steps. Here the generations met and fine music was made.