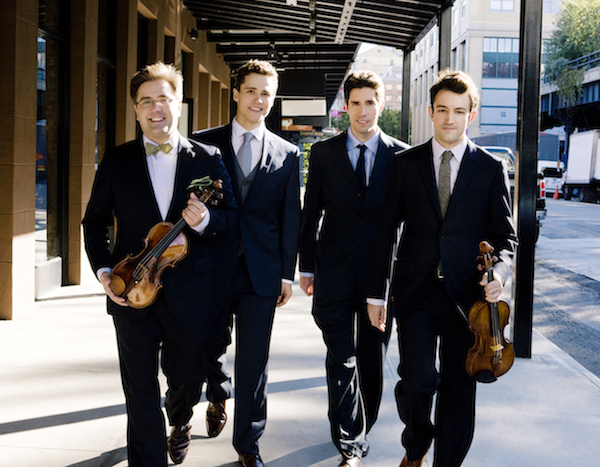 Autumn has arrived. The streets leading up into the Burlingame hills are dark by evening. I ventured up there on Sunday to hear Music at Kohl Mansion present the Escher String Quartet in Shostakovich’s String Quartet No. 15, Op. 144, one of the darkest and most autumnal, if not wintry, works by the gloomiest composer in the standard repertoire. It was surrounded — in a manner that pre-concert lecturer Kai Christiansen likened to the cream around a dark chocolatey center in a reverse Oreo cookie — with works by Haydn and Dvořák, the two most cheerful composers in the standard repertoire.

That didn’t much lift the mood. The Shostakovich Fifteenth is not a quartet often programmed on its own. Usually it appears as part of a cycle or other specialty Shostakovich program. Removed from that context, and performed with the utmost serious mastery by the Escher Quartet, its six interconnected movements — all of them marked Adagio except for one that’s Adagio molto — became a huge expansive lake of music, even though it wasn’t played much more slowly than in other performances. It completely dominated the concert.

As is typical for the Escher Quartet’s style, this was an introspective, even introverted, rendition. The inner intensity was quietly broken by spots of warm gentleness, as the harmony allowed. The weird extended sforzandos that begin the second movement Serenade were played with slow, powerful force, while the slashing chords and pizzicato cries that follow were far less vicious than they often appear. The melody that comes after that was light and a bit whimsical.

Violist Pierre Lapointe, beginning the fourth movement Nocturne with a solo, gave what was by then a welcome relaxation of tension. In context, the mood was refreshing, like the taste of the watermelon slices at the post-concert reception. Lapointe again began the fifth movement Funeral March. Here his line was still smooth and legato, yet appropriately stiffer and more formal.

In the close, intimate acoustics of the Kohl Mansion’s Great Hall, the texture of the music took on utmost importance. This aspect is the Escher Quartet’s finest feature. It was interesting throughout, often taking on new and unexpected aspects: a passage in the opening Elegy like a bagpipe melody (from first violinist Adam Barnett-Hart) with a drone (from his colleagues) chock full of overtones; Barnett-Hart acting as a preacher in the recitative of the third movement Intermezzo with Lapointe and second violinist Aaron Boyd as his acolytes; a similar choral effect from Boyd and smooth-toned cellist Dane Johansen accompanying Lapointe in the Nocturne.

In the close, intimate acoustics of the Kohl Mansion’s Great Hall, the texture of the music took on utmost importance. This aspect is the Escher Quartet’s finest feature.

The most remarkable movement in this respect was the closing Epilogue, which functioned as the potpourri of reminiscences of earlier movements that the composer intended. Little twittles in all the instruments were high and ghostly. The movement ended with a quiet twirl from Lapointe, over which the other three suddenly emitted a profoundly deep unified utterance, like a final breath.

That Haydn’s Quartet in D, Op. 50, No. 6, appeared before the Shostakovich and Dvořák’s Quartet in E-flat, Op. 51, afterwards made all the difference. The Haydn was remarkably similar in tone and texture to the Shostakovich, yet without that already ringing in the audience’s ears, this work was freed to seem fast and easy-going, with a springing rhythm — derived from Johansen’s cello in the first movement, yet propelled even without his bass line in the slow movement. This piece in triple time acted as a slow minuet even more affectingly than the actual minuet did.

The finale passages where the first violin plays the same note on alternating strings, an unusual effect that gives this quartet its nickname of “The Frog,” sounded less ranine (yes, that’s the adjective), or even avian as in some performances, than like a violin tuning up. I apologize for this nullity of an analogy, yet this is the serious, matter-of-fact, non-fanciful world of music that the Escher Quartet occupies.

For the Dvořák, on the other hand, Shostakovich loomed over it like a tall building blocking its sunlight. Op. 51 is a relaxed work full of folk influences. Here even the cheerful finale was tinged with melancholy and introspection, and with a few tough, proto-modernistic sounding passages. The music was lyrical rather than rhythmic, even where the score encourages punch. Again the texture was the finest aspect, particularly in the Romanza’s alternating passages for two instruments, pairing the violins, and the viola with the cello.

The encore was the scherzo from Ravel’s Quartet in F. The Escher Quartet played this just as a listener would by now expect it to play everything. It was full of extravagant exotic sounds — Ravel’s imaginative Impressionistic harmonies were well to the fore — yet without the wild glee often brought to it.

This evening would not merit a description like “delightful.” Impressive, moving, profound, striking — those are the terms for this concert.