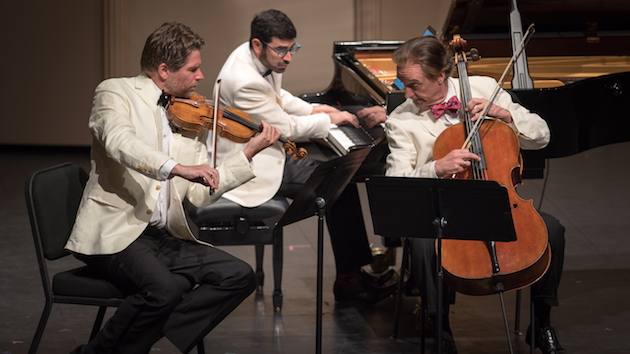 [email protected]’s second program this year was a true chamber music collector’s item: four works for piano and strings, all of them somber and in minor keys, none of them well-known or popular. But the Menlo planners know their audience, and this dark-toned program twice filled the large Center for the Performing Arts at Menlo-Atherton. I heard the second performance, on Wednesday, July 20.

Menlo’s theme for the season is Russian music. This concert paired two Russian works with music roughly contemporaneous with them by non-Russian composers: one pair from the late 19th century and one from the early 20th. That’s not how the music seemed to line up to me, however.

The first two are also interesting and worth hearing. Both are brief one-movement works – Shostakovich’s Piano Trio No. 1 in C Minor, Op. 8, by design, Mahler’s Piano Quartet in A Minor because he never wrote any more of it – composed by teenagers as student exercises, played then, but subsequently buried until after their composers’ deaths. Each is built in sequential layers, alternating slow and faster music, though neither becomes strongly energetic or blazing.

The difference between them is that the Shostakovich is premonitory of his later work, whereas the Mahler sounds like nothing else by him. Both have slow sections with cautious string phrases over a padding piano base. Shostakovich’s have the mournful gravitas he would make his trademark, while Mahler’s float off in an uneasy airiness. Shostakovich’s faster interruptions are abrupt, with an equally characteristic angular intensity, while Mahler’s are more organically integrated and more emotive.

David Finckel played cello in both works. With pianist Michael Brown and violinist Nicolas Dautricourt, he gave the Shostakovich a smoothly expressive, cool dignity characteristic of Menlo performances. Mahler’s quiet, fast-beating piano chords and low rumbles were provided by Wu Han, while Finckel and his fellow string players, violinist Paul Huang and violist Matthew Lipman, intertwined their melodic lines with subtlety, interrupted by a sudden cadence for violin which Huang played with firmness tempered by restraint.

Of the two larger works, Dohnányi’s Piano Quintet No. 2 in E-flat Minor, Op. 26, is a favorite at Menlo. I’ve heard it here before, but almost nowhere else, and I’ve come to admire it greatly. Dohnányi, Hungary’s leading musical pedagogue and an inspiration for Bartók, had begun his compositional life as a Brahms acolyte, and a neo-Brahms air still permeated his music in 1914 when he produced this striking quintet. Highlights of this performance were first violinist Ani Kavafian’s pizzicato responses to Michael Brown’s pregnant opening piano theme, violist Paul Neubauer leading the ensemble in the charming intermezzo movement, and the peaceful fading out of the quiet finale. Dautricourt and cellist Clive Greensmith completed the ensemble. 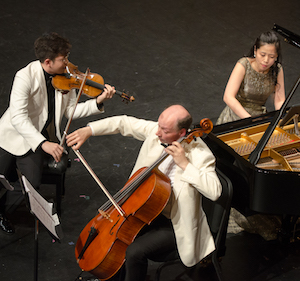 Anton Arensky was a major Russian composer, but he’s almost unknown outside of chamber music concerts. His Piano Trio No. 1 in D Minor, Op. 32, was new to me. It turned out to be an unbridled masterpiece, at least equal to the Dohnányi, and it received the brightest and most energetic performance of the concert. The opening and slow movements were of graceful beauty, while the finale, like Dohnányi’s, was fairly calm. The light yet galumphing scherzo was most amusing, featuring little metallic shimmers from Huang’s violin and occasional ones from Greensmith’s cello. Gloria Chien provided the piano part, more complex and interactive than Shostakovich’s and Mahler’s padding bass lines, firmly anchoring the work.

There was no Prelude concert on Wednesday, but I did take in a noon-hour masterclass from the Calidore Quartet, instructing students in the special requirements of playing string chamber music when there’s a piano along, using a movement from another Arensky charmer, his Piano Quintet, as text. 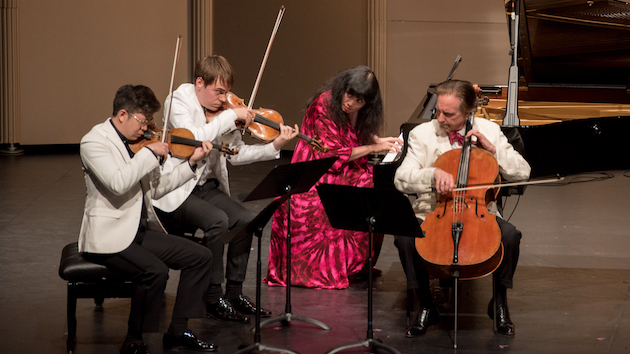