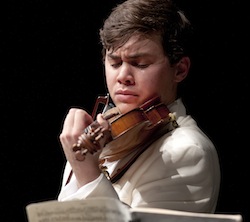 No longer a Silicon Valley startup, [email protected] is a mature 10 years old (with a $1.8 million budget and annual attendance of 15,000) and Program 1 Sunday evening was for the ages.

Following Co-founder/Co-director/Master Teacher Wu Han's welcome to the full house in the Center for Performing Arts at Menlo-Atherton, it started raining blessings.

Benjamin Beilman was 12 years old when Wu Han and David Finckel cobbled the first festival together, with seed money from the Hewlett Foundation. On this night (sponsored by Anne and Mark Flegel), Beilman stunned the house with brilliant artistry, instantly joining festival favorites.

As Juho Pohjonen — himself a festival sensation from a couple of years back — opened Schubert's Fantasy in C Major, Op. 159, D. 934, pearls cascading from his piano, Beilman's violin entered almost imperceptibly, with quiet, intimate singing of such beauty that can make listeners cry.

Michelle Dulak Thomson, who recently reviewed the [email protected] CD set from last year's festival in SFCV, says that the same Schubert ("as awkward as violin writing gets in the 19th century — a very great piece, and a total pain [to perform], which is why no one programs it") was on the 14-year-old Maxim Vengerov's debut album, accompanied by Irina Vinogradova, "but normal people don't go there." 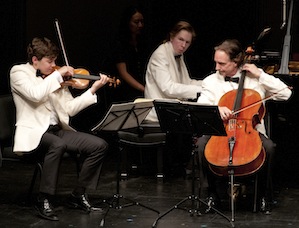 It's a pity because the work is as beautiful as any Schubert, with a prayerful and yet blithe-spirit quality at its core, but quite without the overfamiliarity of the similar "Ave Maria." Patrick Castillo's program note highlights the Fantasy's duality:

The work masquerades somewhat as a virtuoso showpiece, intended perhaps to appeal to the Viennese appetite for Paganini’s pyrotechnic caprices for solo violin. But, while it does indeed require its share of virtuosity, the Fantasy’s expressive richness betrays it as something more than simply a soloist vehicle.

Much, much, more. On Youtube, the Kaja Danczowska-Hesook Ahn performance, while not as lithe and affecting as the Beilman-Pohjonen version, will give you a sense of the work.

But if you missed Beilman, you will have to wait until the [email protected] LIVE CD is released months from now; meanwhile there is his performance of the Prokofiev Sonata for Solo Violin in D Major, Op. 115 online. 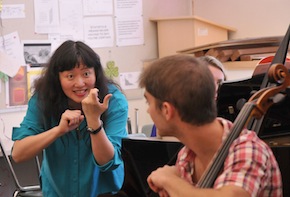 Beilman returned, in the illustrious company of Pohjonen and festival co-director David Finckel, to offer a surprisingly and delightfully lively, playful performance of the Beethoven Piano Trio in E-flat Major, Op. 70, No. 2, bringing more zest and humor to the Allegretto and Finale than we are accustomed to in well-starched company. A special characteristic of the performance was the smooth ensemble, and utter ease, effortless elegance from the three musicians, each at a different phase of their career — from newcomer Beilman, to mid-career Pohjonen, to the great veteran Finckel.

The centerpiece of the concert was Mozart's Clarinet Quintet in A Major, K. 581, with Anthony McGill, clarinet, and the Pacifica Quartet of Simin Ganatra, Sibbi Bernhardsson, violins; Masumi Per Rostad, viola; Brandon Vamos, cello.

McGill, who first appeared in Menlo at age 23, has since gone on to becoming principal with the Metropolitan Opera, a member of the quartet (with Yo-Yo Ma, Itzhak Perlman, and Gabriela Montero) playing at President Obama's inauguration; faculty member of the Juilliard School, the Peabody Conservatory, Mannes College, and the Bard College.

He came to the evening concert fresh (both in time and condition) from an acclaimed Carte Blanche event with pianist Gloria Chien. He breezed through the long, complex Mozart as if the lengthy morning program of Debussy, Scriabin, Messiaen, Poulenc, Schumann, Berg, and von Weber was just a warmup. 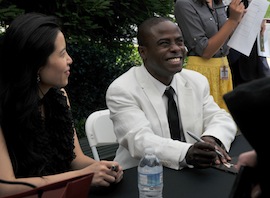 A special aspect of the performance was how McGill managed to be completely part of the ensemble, notwithstanding the sound of the wind solo against four string instruments, and the nature of the work — featuring the full range of the clarinet. It was the hallmark of a musician who serves the music, even at the cost of stardom.

The name of this opening concert was "Sustained: Finding Strength," one fanciful title in a series of such, part of the anniversary season's theme of "Resonance," emphasizing the way music impacts listeners. With all due respect to the festival (sincere and substantial for a decade now), I'd like to raise the question if these titles are — well, let's say — arbitrary.

Why would my — or any other listener's — response to the Beethoven Trio be "Finding Strength," to the upcoming Beethoven String Quartet in F Major, Op. 135 "Illuminated," to Bach, Schubert, and Debussy dance-related works "Motivated"?

Arbitrary, indeed, but it's easy to ignore nomenclature and the fumbling in the ephemeral world of marketing ontology, when music and performances are so worldlessly superb. Call 'em what you will.