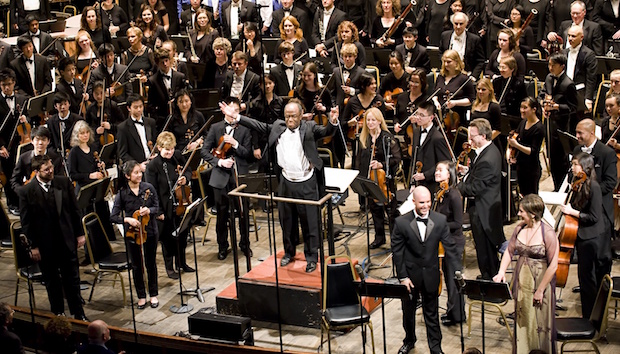 For the Oakland Symphony’s season finale concert at the Paramount Theatre on Friday, May 20, Music Director Michael Morgan offered a specific and distinct musical view of the last century. In large part, this concert journeyed through a calm realm of spiritual stillness and hypnotic beauty.

Take composer John Adams. He’s often associated with the jittery rhythmic school of minimalism, but even those composers are inspired by the quieter mysticism of John Cage. Adams’ The Dharma at Big Sur, the centerpiece of Friday’s concert, pays homage to two less-jittery Cage-influenced composers, Lou Harrison and Terry Riley. The title, borrowed from Jack Kerouac, evokes a Buddhist gazing with wild surmise at the rough Pacific Ocean after coming upon it suddenly through the mountains around Big Sur. 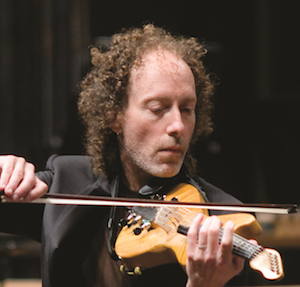 For the part honoring Harrison, a mystical composer but not a minimalist, Adams offers multiple overlapping phrases that merge into a quiet welter of sound. Over this, a six-string electric violin delivers a long-spanning melody full of blue notes, nonstandard intonation, and microtonal expressive devices. This was played by Tracy Silverman, the classically-trained jazz violinist for whom the work was written and who gave its first performance at the opening of the Disney Concert Hall in Los Angeles in 2003.

Gradually the Terry Riley part of the work takes over, with Indian-influenced keening from the violin and increasing tension, volume, and rhythmic jaggedness from the orchestra. The climax forms a satisfactory close. Nearly half an hour had passed on the clock, but the Paramount had been lost in a timeless interval, thanks to the alluring performance by Silverman and the orchestra.

For another view of still beauty, the concert included Samuel Barber’s lyric vocal piece, Knoxville: Summer of 1915. It’s a neoromantic setting of James Agee’s prose poem recalling a quiet family evening on the porch in his early childhood. The most dramatic thing that happens all evening is a streetcar rumbling by. Barber’s music captures the relaxed peacefulness of Agee’s wistful recollections. Soprano Nicole Joseph has a light, almost thin voice, not very carrying, yet with sudden shafts of reflective depth. Her style seemed suitable to express the viewpoint of the author remembering his 5-year-old self.

Igor Stravinsky’s Symphony of Psalms complemented these two works. Like Adams, Stravinsky is known as a strongly rhythmic composer, yet he too had a more inwardly reflective side, which blossomed in his middle and later years with his growing interest in setting religious material. This work offers Latin texts from three Biblical psalms in contemplative settings. The symphony’s heart is its concluding Psalm 150, where the chorus chanting parallel phrases over a slow timpani ostinato can conjure a timeless stillness even more peaceful than that of John Adams.

It didn’t quite work in this rendition. The orchestra and the Oakland Symphony Chorus emitted a boxed-in sound — lightweight and lacking in resonance. Morgan’s conducting confined the work to a small scale, without the expansiveness that would let the music breathe as the Adams and Barber did. 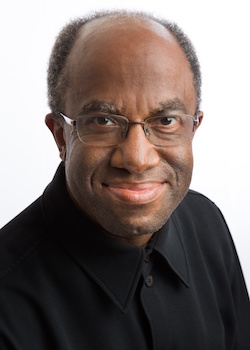 The ideal Maurice Ravel dance score to have fit with the program’s theme would have been the hypnotic and mesmerizing Boléro. Instead, the concert ended with his La Valse, a deliberately distorted post-World War I reimagining of the once-innocent waltzes of Johann Strauss. This was a good performance, with manic energy tempered by firm control from Morgan.

It was probably the best possible response to Silverman’s encore. (The Adams had immediately preceded it in the program.) Silverman let his jazz-improvisation skills loose with a long and captivating run through “I Wish” by Stevie Wonder and “Purple Rain” by the late Prince, setting up ostinato figures on the electric violin which he would have the electronic equipment repeat while going off further on his own. It took some wild work on the Ravel to top that.