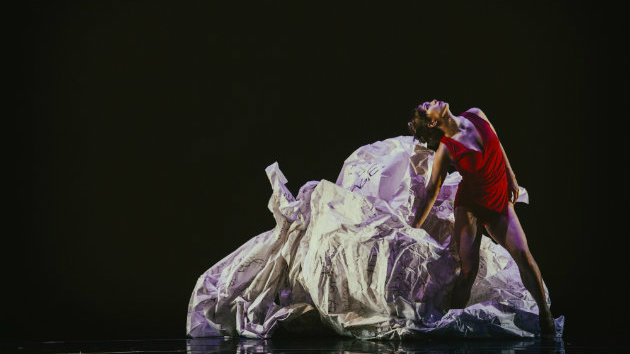 Dead Reckoning, inspired by choreographer K.T. Nelson’s 2013 sabbatical in Death Valley, is a desperate, disparate, shape-shifter of a dance. The performance at the Yerba Buena Center for the Arts’ Lam Theater, where ODC Dance Downtown is continuing its two-week run, is desperate because as it turns out, Nelson is commenting on ecological collapse, particularly as instigated by human beings. It’s disparate because, as performed by Nelson’s dancers to cellist Joan Jeanrenaud’s pulsating score, it is at once weighted and airborne. There’s evidence here of a struggle to return nature to its best course rather than letting our natural cluelessness prevail.

But this interpretation is hardwired to the Internet. You would only know what inspired the piece if you searched for Nelson’s interview with Marie Tollon at a Dancers’ Group event. Without the backstory, we look at what’s happening onstage and consider the oh-so-simple themes of living, loving, and dying, surrounded by natural spasms such as snowstorms — symbolized by the little yellowish, greenish, reddish pieces of paper fluttering down like so many Post-It notes.

In one duo, two women burst across the stage at a dead run. One dashes into the wings, and the other is left facing the audience, panting loudly. The forcefulness takes on another dimension. Nelson has earned this moment, and she makes it work.

The second piece, The Invention of Wings, choreographed by Brenda Way and Nelson, fights for artistic freedom. The dance originated when the ODC co-founders were commissioned by the For-Site Foundation to make a site-specific work to open Chinese dissident artist Ai Weiwei’s current exhibit at Alcatraz. On a proscenium stage, it’s a different animal.

It’s amazing how expansive the piece looked on Alcatraz, a place of confinement. But its creators have done what they can to open it up. On the Howard Street plaza, arriving audience members were able to see white-clad dance students intently inking slogans on a long white piece of paper; as the audience left the theater, the dancers were a sort of Greek chorus, their moves echoing themes of the piece.

During the performance by the company of 10, the inked paper is ripped to shreds, crumpled and enclosed in a wire birdcage, as if the words sealed the prisoners’ fate.

Other grim symbols of captivity abound (as mentioned in my review on Alcatraz). Three men in black skirts are wheeled about the stage upon a pallet, and another dancer inks numbers on their bare backs. Later she’ll mark some of them with a doomful red X. The noble, sorrowful, bravely resistant moves and poses of the captives as well as of other dancers in solos and ensembles have the same somber quality as Rodin’s sculpture of the Burghers of Calais.

Numbers, perhaps the days behind bars, or the number of prisoners, are recited aloud. There’s a tortured score of static and discord by Olafur Arnalds, Ben Frost, and Ben Juodvalkis. A woman in white walks down one of the red carpets, unbuttoning layer upon layer of white lingerie and muttering to herself. When it’s down to the bottom layer, she rolls off the edge of the stage onto a shallower platform. (The dancer, Yayoi Kambara, a lovely exemplar of the intensity and focus of the ODC troupe, is retiring.) Other women appear in red maillots. They interact with large sculptural piles of crumpled paper that, one suspects, hide other dancers; pushing against these white mountains, the women in red are nearly engulfed by them.

The wings of the title come in nearly last. The dancers, in white paper with billowing white sleeves — illuminated in yellow light at the sides of the stage and on its two balconies —  stretch and reach hopefully, transcendently. The final moment illuminates Kambara, standing about 10 feet tall, in a huge white billowing paper skirt with themes of art and resistance inked upon it.

Ian Winters and R.J. Muna’s scenic design includes black and white photos capturing the Alcatraz cell block called Main Street on which ODC performed. It’s a great shot at adaptation, yet one can’t help wishing the audience could have been ferried to the isle of tears to watch a reprise of that first show.