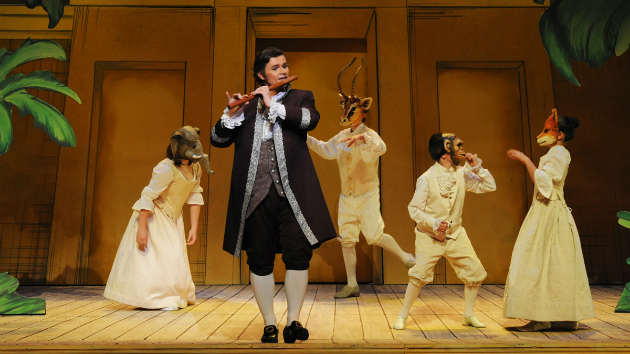 Opera San Jose’s latest production of The Magic Flute, which opened last weekend, is winsome. The set design, by Ryan McGettigan, involves a Rococo proscenium layered in front of a theater-in-the-round. Act I is painted in airy pastels, while much of Act II is in a darkened theater and employs neon lighting.

Brad Dalton's stage direction is detailed — there is a lot of movement at all times and we never lack for activity to watch on stage. There are many adorable children in period dress on stage during the overture. They returned to help with puppetry, bring in various props, stand in for animals by wearing masks, and the like. This was effective, and it was clear that the audience approved.

The piece is being performed in English and German. English is used for spoken dialogue, while German is sung. On one hand, the immediacy of English for an American audience is welcome: It is more engaging to hear a joke being told rather than reading it. With poorly timed supertitles, invariably the laughing comes before the words in question are actually said.

Eventually, of course, you become accustomed to the language-switching, and the matinée performance on Sunday was a pleasure. The orchestra sounded bright and lively under the direction of Maestro Joseph Marcheso, who replaces an ailing George Cleve in most of the performances in this run. The flute solos were lovely. The chorus was strong and cohesive. Mozart is not forgiving, however, and it was obvious when the singers were occasionally behind the orchestra; though the tempos were not particularly speedy.

The principal cast has obvious standouts. Tenor Kirk Dougherty sings an earnest Tamino. There are times when he can sound labored, but his voice has heft and cuts through the instrumentation. Soprano Hae Ji Chang is charming as Pamina. Her resonant sound is effortless and her "Ach, ich fühl's, es ist verschwunden" (“Ah, I see it has vanished”) has a beautiful tenderness. Isabella Ivy is a formidable Queen of the Night. Her flexible, controlled voice was also appropriately terrifying in "Der Hölle Rache kocht in meinem Herzen" (“Hell’s fury burns in my heart.”)

Baritone Matthew Hanscom is a lovable Papageno. His acting is on point. His voice could be more focused at the bottom, but he supports others well. His duet with Hae Ji Chang in Act I was particularly nice. His "Pa pa pa" with the adorably droll Jennie Litster (Papagena) was delightful. Bass Silas Elash had a shaky start as Sarastro, but his two arias in Act II were powerful.

Elizabeth Baldwin (First Lady), Chloe Smart (Second Lady), and Lisa Chavez (Third Lady) can be shrill and do not always seamlessly blend their voices. They were effortlessly comical and acted well together. The Three Genies (Chris Salinas, Daniel Ostrom, and Winter Felton-Priestner) sound perfectly angelic. David Margulis could be quiet but makes for an amusing Monostatos. "Das klinget so herrlich" in the Finale of Act I was funny in no small part because of him; though the chorus was equally excellent.

The production ends prettily with the stage transformed back into the late Baroque theater of the first act. All are dressed in soft-hues. The ideals of the Enlightenment have triumphed in a satisfying manner, and the enthusiastic audience roared approval.