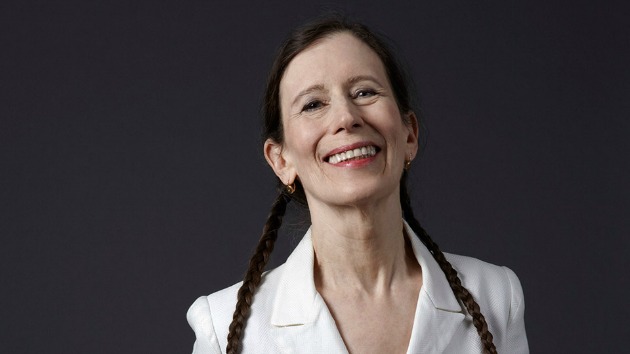 With her braided pigtails, earthen-tone smocks, and diminutive stature, Meredith Monk has cultivated an instantly recognizable, elegant simplicity that reflects her musical aesthetic. At 72 years old with a five-decade career still in progress, the composer and singer doesn’t show any outward signs of slowing down. She still possesses an arsenal of (in)human vocal techniques, which she showed off again in her Sunday appearance at SF JAZZ Center, as a headliner of the three-day Other Minds Festival of new music.

Even if Monk is far from retiring, she is a mature artist looking back on a fruitful career — last September, Monk received the prestigious National Medal of Arts. Sunday served as a retrospective of Monk’s compositional legacy, with works spanning from the late 1960s through the end of the last decade. While Monk called the evening “The Soul’s Messenger,” a more appropriate title would have been “The Soul’s Journey.”

This “trip down memory lane,” as Monk dubbed it onstage, began with some a cappella feats of multi-tasking which she called “duets for solo voice.” For “Click Song #1” from 1988’s Light Songs, she hummed a melody while simultaneously producing tongue clicks as a kind of “percussion” accompaniment. It was strange to watch Monk’s mouth, which synched with the clicks but not so much with the humming — the melody, then, seemed like a disembodied voice that emerged from nowhere.

For “Jew’s Harp” from the 1977 set Songs from the Hill, Monk inserted a jaw harp into her mouth, producing twangy vibrations, which she supplemented with strong. rhythmic inhalations and exhalations, pitched singing, and liquid-sounding tongue and lip manipulations. In another uncanny moment of disembodiment, Monk somehow created a shadow voice that sang in harmony with her own voice, perhaps by utilizing the jaw harp as a kind of echo device.

These extended vocal techniques, which can leave you questioning your own ears, sometimes seem to be the main event in Monk’s music. It is true that Monk has a distinct compositional style that draws on minimalism, popular music, American folk, and various Native American and non-Western traditions. Yet you never get the sense of any stylistic evolution — this was especially apparent in the mostly chronological layout of Sunday’s concert.

Many of Monk’s pieces seem to follow the same format: a steady, repeating chord progression in the piano accompanying a textless, modal melody for the voice that is developed through the additions of increasingly difficult vocal techniques. Sometimes the formula works splendidly. In “Madwoman’s Vision” from her 1988 film Book of Days, Monk realistically conveyed the rantings of a mentally disturbed woman through barks, guttural sounds, and rambling in an imaginary language — all over a piano riff that could serve as the harmony for an Adele ballad.

Yet this model got old fast as one piece blurred together with the next. The same motivic figures were recycled over and over, and the only components that changed were the crazy barks, grunts, and ululations, their novelty quickly wearing off.

This may be an unfair and incomplete assessment, however, considering that many of Monk’s works also rely on extra-musical features. Like a cinematic auteur, she oversees every aspect of her large-scale, musical-theatrical works — from film to choreography to staging. As most of the selections from Sunday’s concert were mere musical snippets from larger, quasi-dramatic works, they lost of their original effect.

In fact, the most successful numbers on the program were those that still retained some elements of theatricality. For “Choosing Companions,” an excerpt from Monk’s 1991 opera ATLAS, the composer was joined onstage by her vocal apprentices Katie Geissinger and Allison Sniffin. The three acted out a scene from the opera in which Monk, portraying the French explorer Alexandra David-Néel, holds “auditions” for an exploration companion.

Seated at the piano, Monk sang and played a short musical figure on the text “hey-oh,” which Geissinger and Sniffin repeated with variations. Sniffen skillfully maneuvered rapid registral changes and Geissinger executed passages at the very top of her range with seemingly effortless lyricism. All the while, the two performed Monk’s angular choreography, producing a lovely — if slightly enigmatic — stage picture.

This kind of “audition” calls to mind the real-life apprenticeship process of Monk’s ensemble members, who work intensively with Monk in order to reproduce exactly her unique timbres and extended techniques. For “Hocket” from 1990’s Facing North, Monk and Geissinger’s melodies locked together like a dovetail joint, forming a single, seamless line. As Geissinger was able to imitate Monk so flawlessly, it sounded, with  eyes closed, as if only the latter were singing. Though Monk may be nearing the end of her career, she has, through her disciples, produced a living vocal tradition rather than a series of museum pieces.