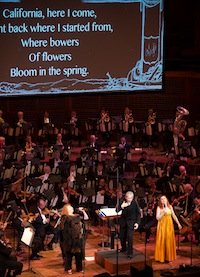 A centenary celebration naturally includes a consideration of where the organization was a century ago and what context it came from. When the San Francisco Symphony announced its 2011-2012 centennial season, however, its spokespeople didn’t sound very interested. Executive Director Brent Assink said in an interview at the time, “We looked at the programs from that period, and there was just nothing interesting about them. So we figured, what’s the point?”

Fortunately, one centennial concert escaped that dismissive attitude and turned into a robust celebration of San Francisco’s early musical days. It was Music Director Michael Tilson Thomas’ pet project for the season, “Barbary Coast and Beyond.” The first of three performances took place on Thursday at Davies Symphony Hall.

The program was not intended as a re-creation of a period concert, and certainly not of period performance style. Like some of MTT’s previous celebratory programs, it was a cavalcade, in his own word, retrospectively presenting musical snippets and excerpts. The period covered was the Gold Rush of 1849 through the Panama-Pacific Exposition of 1915. The thesis was that San Francisco has always been a vitally musical city, whether entertaining itself in frontier days or using music to rebuild its spirits after the earthquake and fire of 1906. Many of the works on the bill are forgotten today, though all of them were popular at the time. A spoken narration shaped the program and introduced each selection. 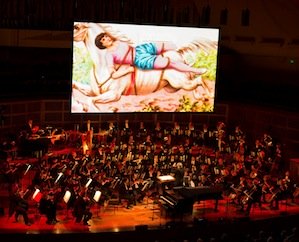 The narration, written by opera librettist J.D. McClatchy and delivered by Val Diamond (the Ethel Merman-esque performer of Beach Blanket Babylon fame), with a few words from MTT at the podium, was anecdotal and concentrated on musical personalities and local color. For harder historical data, the concertgoer could turn to James M. Keller’s informative essay in the program book. Old photographs and engravings of touring performers of the day and San Francisco cityscapes, choreographed by Jeffrey Elias Teeter, enhanced the historical atmosphere as they were projected on a screen over the stage.

Yes, the evening included a selection from SFS’ first ever concert in December, 1911. There must have been something interesting about it after all. The major work on that program was Tchaikovsky’s then recent “Pathétique” Symphony. That the excerpt played on Thursday was the desperately cheerful third movement, in a light, airy performance free of hidden melancholy, speaks both to the abridgment necessary to cram so much music into one concert, and to the ethos of the evening: lively and congratulatory. Since the finale was not forthcoming, there was, for once, none of the shushing accompanying the applause so common after the third movement in performances of the “Pathétique.” 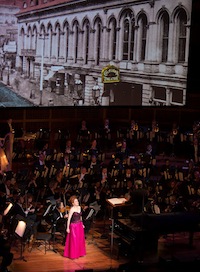 Other excerpts celebrating specific past concerts in town included the opening number, the catchy Coronation March from Giacomo Meyerbeer’s opera Le Prophète, performed in 1864, and the conclusion, the final pages of Camille Saint-Saëns’ grandiose Hail California, written for the 1915 fair, played here by the orchestra with organist Cameron Carpenter and the U.S. Air Force Band of the Golden West. An abridgment of Liszt’s gaudy tone poem Mazeppa celebrated the time Adah Menken played the title role onstage as a strip-tease. The cymbals had a lot of work in all these pieces.

The greater part of the concert evoked the spirits of the many touring performers who made the long journey to California in those early days. Each soloist taking a part walked on stage as the music started, took brief bows afterwards, and quickly departed to return again later for another piece. There were no curtain calls until the very end. This concert was about the historical performers, not the present-day ones, and there was a lot to get through. The orchestra was just the accompanist in all of these: MTT let the soloists take the lead in tempo and style.

Anton Nel played the part of Louis Moreau Gottschalk in that pianist’s own proto-ragtime Grand Tarantelle for piano and orchestra, and also gave us a short solo piano composition by one J.H. Stockman depicting the 1906 quake. Violinist Vadim Gluzman’s brisk, clipped style, with plenty of crisp left-hand pizzicato, was appropriate for the roles of virtuoso violinists Ole Bull, Henryk Wieniawski, and Fritz Kreisler in their own showpiece compositions. Bull’s A Mountain Vision was the least familiar and most attractive of these, a setting of Norwegian airs full of drone double-stops in Hardanger fiddle style. 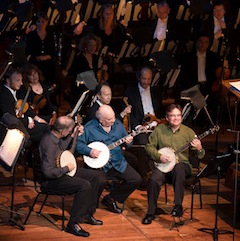 Soprano Laura Claycomb, wearing a different dress for each appearance, was the only soloist to attempt to capture the personal manner of the performers she was channeling in songs and arias by Délibes, Bellini, and Verdi; seductive with showy ritards for dancer Lola Montez (as Montez would do it if she sang, I guess), coy and charming for Adelina Patti, and slow and stately for Luisa Tetrazzini.

Oh, and there was more, not at all typical of a symphony concert. A banjo trio played and sang Stephen Foster’s Hard Times Come Again No More. SFS percussionist Jack Van Geem played the Mexican Hat Dance on the marimba. Cameron Carpenter, all punk in stovepipe trousers and rhinestone cowboy boots, played his own positively lurid organ arrangement of Sousa’s Stars and Stripes Forever. Caroline McCaskey, holder of the International Musical Saw Championship — I didn’t even know there was such a title — wielded her hardware in the lyric violin theme from Offenbach’s Orpheus in the Underworld Overture. And the evening concluded with Diamond and Claycomb leading the surprisingly willing audience in a sing-along of California-themed popular songs of the Exposition period: Hello, Frisco! (commemorating the first transcontinental phone call), and the better-remembered San Francisco, Open Your Golden Gate and California, Here I Come.

Whew, what an evening. To use an old phrase, it was a hoot and a half.