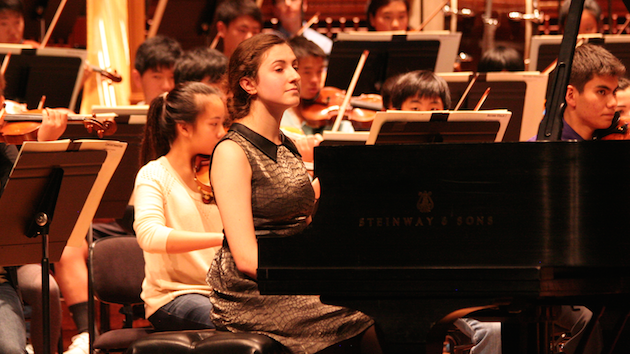 The future of music arrived at Davies Symphony Hall on Saturday in the form of the San Francisco Symphony Youth Orchestra, featuring 17-year-old pianist Agata Sorotokin. The concept of the youth orchestra poses a strange paradox for the classical music world: Professional orchestras across the country are dwindling in popularity as the average age for concertgoers continues to rise. Strikes are become increasingly common as a means of securing improved healthcare and living wages for chronically underpaid musicians. Along with this comes a new wave of post-minimalist, Pitchfork-approved modern classical composers that gnaw at the very soul of the classical music tradition. In the midst of this constellation of corroding forces, a youth orchestra of this caliber augurs hope for classical music, promising at least another century of glory or the demise of the human race, whichever comes first.

SFSYO opened with the overture from Glinka’s opera Ruslan and Lyudmila. Conductor Donato Cabrera brought out the lyrical Mozartian elements of the string textures, although there was an occasional disconnect between the various sections. Cabrera’s flamboyant and manic conducting translated into an energetic performance that made up for brief rough patches. While the string section fell apart a bit toward the end of the piece, Cabrera infused a resounding joy that echoed through the hall for the duration of the concert.

Sorotokin next performed Prokofiev’s Piano Concerto No. 3, a technical behemoth even for the likes of Yuja Wang and Lang Lang. Written during Prokofiev’s years in the U.S., the composer achieves a delicate balance between the cynical and the sentimental, the calculated and the impassioned. Sorotokin and the orchestra easily found the emotional depth of the melodicism even in this most dissonant of Prokofiev’s piano concertos.

It’s easy to forget that the musicians in SFSYO have yet to reach their musical peak ... They provide a dazzling ray of hope that the venerable tradition of classical music will continue to delight future generations.

Unfortunately, Sorotokin and Cabrera were less successful in interpreting the sarcasm and biting wit underlying the composer’s neoclassical leanings. While Sorotokin excelled in bringing clarity and a sense of breathlessness to the flourishes and runs, she had trouble exploring the darker aspects of the work, leading to a hollow, albeit brilliant, technique that lacked substance. Only in slower moments could Sorotokin peer down the dark caverns of Prokofiev’s soul. While Sorotokin evoked depth in this first interpretation, she found more shades of melancholy in her later solos and cadenzas.

The orchestra suffered from sporadic issues of balance, with Sorotokin’s virtuosic runs sometimes eclipsed by the enthusiastic orchestra — the young pianist unable to strike an accord between forceful dynamics and technical prowess.

In the second half, the orchestra took a successful turn into Berlioz’ Symphonie Fantastique. The highly programmatic work describes an artist whose heartbreak leads him to attempt suicide. When his overdose fails, he lapses into a drug-induced coma wherein he observes his own execution and funeral. Despite the Pink Floyd-esque plot, Berlioz’ composition clearly pays homage to Beethoven, in both orchestration (i.e., the use of woodwinds) and structure; the five-movement form references Beethoven’s “Pastoral” Symphony No. 6. To this end, Cabrera and the orchestra brought a grandeur and intensity to the performance. Where the string section felt almost mechanical in the Glinka, the players offered an emotionalism and lushness not found anywhere else in the program. Despite intermittent rough patches, this piece was the highlight of the afternoon concert.

It’s easy to forget that the musicians in SFSYO have yet to reach their musical peak. A few years from now, we will likely see their names appear with increasing frequency in international competitions, concert halls, and world-class symphony orchestras around the world. If nothing else, they provide a dazzling ray of hope that the venerable tradition of classical music will continue to delight future generations.