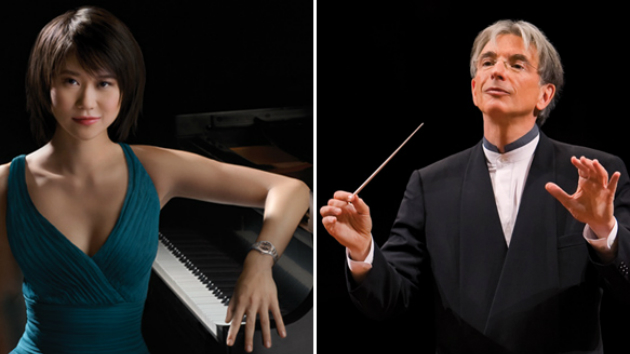 Before Michael Tilson Thomas became music director of the San Francisco Symphony, he was principal conductor of the London Symphony Orchestra. He’s still a principal guest conductor there, and this last weekend he wore this other hat for San Francisco audiences. On Monday evening, for the second of two concerts, MTT looked delighted to find this other set of familiar faces on the Davies Symphony Hall stage.

Conductor and orchestra immediately launched into Hidden Variables by the contemporary British composer Colin Matthews. The composer was present and was coaxed out for a bow afterward, looking more like a soccer star than the distinguished musician he is (he was composing assistant to Benjamin Britten in the 1970s, among numerous other credentials).

Like many contemporary composers, Matthews writes jittery, restless music that shifts moods and effects abruptly. In his program note, he mentions that this 1988 work includes minimalist influences among those moods and effects. From the note, he appears embarrassed by this, because minimalism has been often criticized as too simplistic a style by those who expect modern music to achieve fearsome complexity.

For my taste, though, the minimalist element is what makes Hidden Variables appealing. It gives grounding to a kaleidoscopic array. The opening woodblock rhythm, which sets the music going, inevitably seems an homage to the same effect in John Adams’ then-new Short Ride in a Fast Machine. The syncopated pulses and creamy harmonies of Philip Glass, and figurative patterns from Steve Reich, keep reappearing in the music, operating as a base, like the passacaglia line in a complex Baroque structure.

Conductor and orchestra have played this work many times before, and they performed with the ease of speaking a native tongue.

They were equally at home in Gershwin’s Concerto in F, which followed. We’re long past the days when European orchestras struggled with American urban rhythms. This British orchestra swung gracefully under its American conductor in Gershwin’s bright, colorful music. Principal trumpet Philip Cobb’s solo in the Adagio movement was of ideally gracious smoothness.

The piano soloist was Yuja Wang, a frequent guest at Davies. Indeed, her encore, “You Come Here Often?” —  a boogie number with plenty of work for both far ends of the keyboard — was composed for her by MTT. She could hardly be overlooked in her blindingly Astrobrights-style chartreuse dress.

Her playing also could not be ignored. It ran in emotive contrast to the orchestra’s. After the orchestra bounded up in the opening with canine eagerness, Yuja was languid, a cool cat in her first solo. In the Adagio, by contrast, she nudged the orchestra into energy from its opening slow blues. Sometimes, when orchestra and soloist played together, the rhythmic approaches didn’t quite match up. That’s the price charged by an otherwise welcome fluidity.

The second half of the concert brought a varied treatment of Shostakovich’s Fifth Symphony, followed by a palate-cleansing encore of Brahms’ Hungarian Dance No. 1. MTT had the orchestra begin each of the two big, slow movements in the Shostakovich symphony as restrained and sedately as possible, conserving energy then used to push the central climaxes. The LSO’s string sound, textured yet resonant in a flexible way, was conspicuous here.

Of the remaining two movements, the scherzo was light and coy rather than vehement. Likewise, the finale began quickly. For once, this strutting pomposity actually sounded light, even jolly. Then, the blindly wandering middle section was taken with the same restraint as the slow movements. When the bright D Major thematic material returns, the performance was a bit slower and more serious, introverted instead of crassly celebratory, as if something had been learned from the intervening experience.

This is an interesting interpretation that sidesteps the well-worn debate over whether Shostakovich was secretly mocking Stalin with this finale, a suggestion first made by Solomon Volkov's purported memoir of the composer, Testimony. This is at least the third time I’ve heard MTT conduct this symphony, and each time he’s taken the finale differently. He’s a versatile and thoughtful conductor with at least two excellent orchestras at his command.