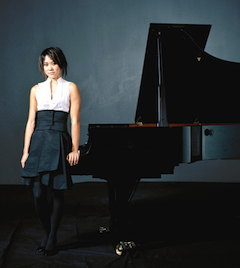 Music statisticians keeping track of frequency of performances often count multiple evenings of the same concert program as a single item. They’ll have trouble deciding what to do with last week’s San Francisco Symphony concerts at Davies Symphony Hall under Michael Tilson Thomas. The three performances all featured the same big symphony, Rachmaninov’s Second, but a different pianist played a different concerto on Wednesday than on Thursday and Friday; and the curtain-raiser was different too. I was fortunate enough to hear both versions, on Wednesday and Thursday.

Thursday’s piano concerto was Prokofiev’s No. 3, and the soloist was Lang Lang. He’s a pianist whom many listeners love and others love to hate. I am not a fan. His technique is fast and fleeting enough, though no more so than that of many other pianists, and most of them are better at keeping synchronized with the orchestra than he is. He played with an irregularly-expressed élan, full of hollow thumping sounds and oddly-emphasized outlying notes. It was eccentric and not particularly musical. Fortunately it did little harm to Prokofiev’s concerto, which is spiky and jumpy enough that few listeners are likely to notice if the pianist adds more — a lot more — spikes and jumps.

Though Lang got the bigger cheers sitting down, Yuja received warmer applause standing up. Lang, however, was the one who played an encore, Chopin’s “Minute” Waltz, which he treated like an aria from a comic opera, less a melody than an opportunity to mug for the audience.

Yuja’s presence, even though she could make it for only one night last week, was to give her and the orchestra a chance to practice, and for the home audience to hear, some of their repertoire for SFS’ tour of China, Taiwan, and Japan starting this week. The rest of the program on both evenings is also going on tour: the Rachmaninov and two brief works from the distinctively West Coast school of 20th-century American composers, one by Henry Cowell on Thursday and Friday and one by Lou Harrison, Cowell’s pupil, on Wednesday.

Cowell’s Music 1957, named for the year he composed it, is a typically pleasant slice of his mature orchestral music: modal melodies in the strings with occasional high, eerie harmonics, considerable light percussion with the melody frequently handed over to the xylophone, and occasional breaking out into jolly Irish-American folk style. It’s a pleasure to hear this kind of music live for a change, instead of on a scratchy old monophonic recording. Judging from the two performances I heard, Rachmaninov’s Symphony No. 2 will show the Asian audiences what our orchestra and its music director are really made of.

Cowell was strongly influenced by Asian musical traditions, which is one reason his piece is going on the Asian tour. Harrison’s “The Family of the Court” displays Asian inspiration more explicitly. It’s the first movement of a “circle of the Pacific” international survey suite from 1963 titled Pacifika Rondo. This movement is specifically Korean. It’s slow and formal, with much percussion, including Korean drums, adding a touch of grandeur to the pentatonic melody that’s frequently doubled by a keening Korean double-reed woodwind called the miguk piri. Harrison often employed ethnic instruments, particularly percussion, from the gamelan on down; most likely the complete Rondo would require more additional instruments than SFS could fit on its plane.

Judging from the two performances I heard, Rachmaninov’s Symphony No. 2 will show the Asian audiences what our orchestra and its music director are really made of. This was one of those occasions when MTT takes complete command of the orchestra and shapes the music in his own image. It almost doesn’t matter what the piece is. Still, I hope that some listeners inclined to dismiss Rachmaninov heard this and experienced revelations about this often-belittled work.

The unexpected sides of Rachmaninov that appeared in this performance included the master of counterpoint, in the finely layered sound, and the tightly-wound dramatic composer, in the sudden crisp flips, and the growling violas and punching winds that jumped out of the texture. There’s far more to Rachmaninov than the lush string melodies he’s famous for. Whenever one of those melodies did appear — and there’s at least one in each of the four movements — MTT’s tempos, otherwise fairly strict, shifted to the flexibility of putty, extreme ritards littering the landscape. A generally fast pace and the light sound, not too rich or sumptuous, kept this from becoming indulgent.

Overall, the clarity and energy created a fresh, compelling reading of the work, cogent and finely shaped. The two performances I heard differed in emphasis. In Wednesday’s performance, the weight of the inspiration seemed to me to be on the first two movements, while in Thursday’s it lay on the last two, particularly the Adagio third movement. On Wednesday this had seemed just slightly meandering, while on Thursday it tightened up and became emphatically declamatory.

So the SFS is ready to ship out for its brief vacation, leaving behind this small clutch of performances as its parting gift.