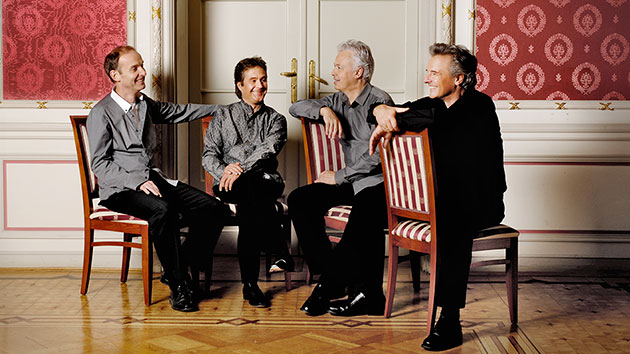 The Auryn String Quartet brought some of Beethoven’s biggest and toughest chamber works to San Jose this last weekend. They bore their trophies triumphantly on to the stage of Le Petit Trianon Theatre for two concerts for the San Jose Chamber Music Society.

These concerts marked the conclusion of a three-year Beethoven quartet cycle that the Society undertook. The first year’s concerts were played by the Escher Quartet, the scheduled Auryn having had to cancel for illness that year. The Auryn Quartet has appeared the last two years, imposing its impressively weighty, German style on these monuments.

Weightiest of all is the Quartet in B-Flat, Op. 130. This is the one which, having already given its listeners two large serious movements and no fewer than three lighter ones, closed in its first performance with a fugal movement so large – about 18 minutes long – and so raw, furious, and generally unpleasant that Beethoven, most unusually for him, gave in to his friends’ advice and removed it, publishing it separately as the Grosse Fuge and replacing it with a new, lighter-toned finale.

So which version of Op. 130 should be played, the original or the revised? I’ve heard both. The choice of finale retroactively affects the rest of the work. For the Auryn Quartet, in a full Beethoven cycle the answer is clear. These players believe that the opening of the Grosse Fuge is designed to respond to the slow movement Cavatina that precedes it, and makes no harmonic sense otherwise.

They played the original version and after the well-deserved applause, they then played the replacement finale as a scheduled encore. As an encore, it worked better than it would have as a finale. It had a cheerfulness within its fast clockwork motion that hadn’t appeared earlier in the quartet.

The three big movements – the opening Allegro, the Cavatina, and the Fugue – were played with an air of determined earnestness, eschewing either eccentricity or extreme vehemence. The phrases at the beginning of the first movement where the Allegro tries to break out of the introductory Adagio appeared with hesitation rather than frustration. The players brought a similarly cool, detached effect to other key subsidiary sections.

On the other hand, there was the “Danza tedesca,” one of the shorter movements. A gentle, courtly dance on the surface, this, if played with strict attention to Beethoven’s unusual dynamic markings, becomes rhythmically off-kilter, even seasick. The Auryn gave this with enthusiasm, and even applied some of the same effect to the rather violent scherzo.

This group plays with such unity of sound that it would be hard to single out any one player. In some unison sections, like the repeated figure for three instruments in the scherzo of the Quartet in F Major, Op. 135, the effect was uncanny, like some berserk kitchen blender going wild and then running down.

Not that these strong rhythms were mechanistic. Precision worked to give bright energy to accompaniments throughout both concerts, and the Grosse Fuge could not possibly have worked without the application of the same techniques to its largely non-unison figures.

Precision worked to give bright energy to accompaniments throughout both concerts.I said that the machine figure in Op. 135 was for three instruments. The fourth was Matthias Lingenfelder on first violin playing a jaunty tick-tock melody on top of them. Solo parts such as this did not generally stand out in these concerts. The players were too absorbed in sounding together to concern themselves with solo displays.

Only in the Quartet in F Major, Op. 59, No. 1, did this change. This quartet is full of long, lyrical solos, often against inconspicuous accompaniment. Here, the individual tones of second violinist Jens Oppermann, violist Stewart Eaton, and particularly cellist Andreas Arndt could be heard. This was a relatively relaxed, expansive performance of one of Beethoven’s largest quartets.

Two of the early quartets from Op. 18 were played at these concerts also, No. 4 in C Minor and No. 5 in A Major.

No. 5, normally the more courtly and Mozartean of the pair, came out dark and serious, like the Op. 130 it was heard with. Chordal passages moving together had a strong flavor of mid-period Beethoven. No. 4, the more dramatic of the two, at least in its opening movement, came out the lighter work here. Touches of the off-kilter movement of Op. 130’s Danza tedesca appeared in the Menuetto, and the casual cheer of the replacement Op. 135’s finale came back in the finale here as well.