The San Jose Chamber Music Society’s ability to attract prestigious performers to the Trianon Theatre achieved another highlight on Saturday, April 22, with the San José debut of the Dover Quartet. Since claiming the top prize at the Banff International String Quartet Competition four years ago, this group from Philadelphia has been making triumphant runs around the concert circuit. Next season, the ambitious quartet will be playing several complete Beethoven cycles.

The program that the Dover Quartet brought to San Jose was smaller than that only in size, not in artistic significance. Each work on the program formed a separate emotional journey.

Haydn was represented by his final, rarely heard, unfinished quartet, published as Op. 103. Though his failing health prevented him from writing more than a slow movement and a minuet, what would be the middle half of a standard quartet of the time, Haydn still commanded all the wit and daring that had made him the first great master of quartet composition.

The Dover Quartet gave this work a highly textured reading, far more full-bodied that is usual for Haydn. The music squeezed out as if from an organ or accordion. The Andante was as urgent as it was lyrical. Both there and in the minuet, chords exploded with harmony. 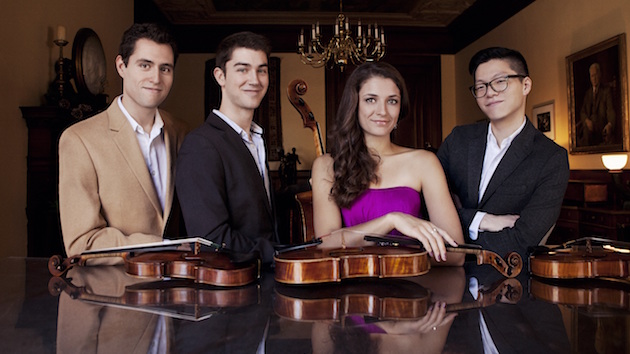 Shostakovich’s Quartet No. 2, Op. 68, opens with some squeeze-box chords, but the Dover Quartet did not continue in the style they brought to the Haydn work. This was a quartet of four individual voices engaged in anxious, even angry conversation. Even the distant and emotionally ambiguous waltz movement built up into a frenetic fury. This was Shostakovich at his most angular and intimidating. Preconcert lecturer Roger Emanuels said that a student had asked him in puzzlement, “How do you listen to music like this?” Other performances might give an answer with a hint of sweetness. This one was uncompromising and declarative.

In the final theme and variations, divergence began to give way to coherence. The instruments paired up in their melodic lines: violist Milena Pajaro-van de Stadt and cellist Camden Shaw, both with low-lying, resonant tones, on the one side; and the two violinists, with sweeter and smoother work from Joel Link and a crisper, more metallic style from Bryan Lee, on the other. An evolving unity among the four brought the work to a satisfying conclusion.

Beethoven’s Quartet in A Minor, Op. 132, would be a fairly small-scale, lightweight four-movement quartet without its fifth movement in the central spot, the enormous layer cake of alternating Adagio and Andante that the composer called his “Holy Song of Thanksgiving” for his recuperation from illness. The Dover Quartet played this in a cross between their blended and individualistic styles. The Adagios were restrained, giving a sense of Beethoven’s inner fragility, while the Andante interludes were almost jaunty in their rhythmic emphasis.

Parts of the outer four movements can be charming and even sensuous, but this performance de-emphasized the melodic. It was more abrupt and declarative, like the Shostakovich, especially in the dramatically harsh concluding march and finale. The opening movements were lighter, notably in the Scherzo trio. This was played with light energy and conspicuously steady pacing.

The Dover is a serious-minded and fairly intimidating quartet. What makes this group shine, besides boundless dedication to the music, is the skillful command with which all the players navigate even the most challenging passages. These were deep and enriching performances of some of the most profound music in the repertoire.