The Silicon Valley Music Festival is the brainchild of flutist Ray Furuta, who serves as its artistic director. This week marks the second year that the festival is putting on a series of chamber music concerts and master classes around San Jose, using both local and out-of-town musicians. 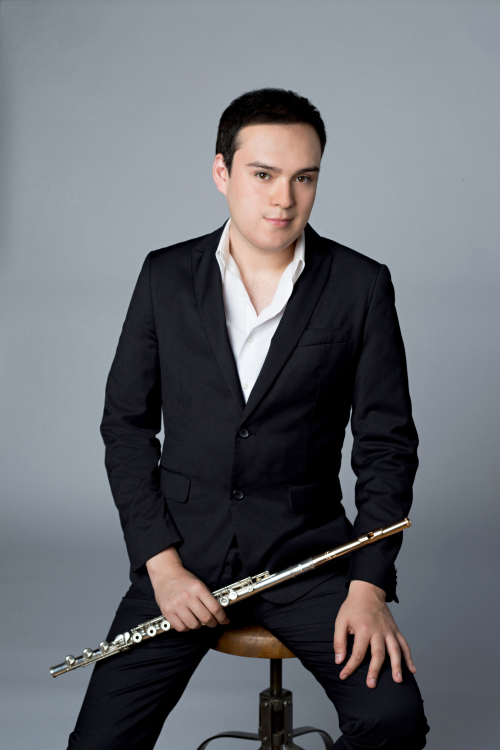 Tuesday’s opening concert, at the Alum Rock United Methodist Church, featured a cadre of highly capable performers whose talents were not disguised by a program of unfamiliar, and sometimes quite odd, music. It was the festival’s “new music” concert — the remaining programs feature more-conventional repertoire — presenting an eclectic variety of intriguing sounds, though the definition of “new” was somewhat elastic. Some of the works were written within the last decade; others date from the early 1980s, making them at least as old as many of the performers; and one work is a venerable 60 years old.

Jake Heggie’s 10-year-old song cycle The Deepest Desire, set for mezzo-soprano accompanied by flute and piano, was the evening’s highlight. This was one composition where the composer’s genius matched the performers’ talents. The lyrics are spiritual meditations by Sister Helen Prejean, whom Heggie met in connection with his opera on her prison ministry, Dead Man Walking. Ryu-Kyung Kim sang with a deeply mature spirituality, only modifying her voice into the harder tones of a classroom nun for one number (in the form of a reminiscence from Prejean’s early teaching career, when a candle caught her habit on fire during class).

The parts for flute and piano thoughtfully reflect and comment on the words and actions. Furuta and pianist Michelle Cann took these with great care and expression. Together with Kim they forged, as Heggie intended, a single dramatic entity with the voice as its primary expression. Only the piano, the church’s rinky-dink off-brand baby grand, was deficient. It didn’t deserve the excellent pianists who played on it.

A Song From Far Away, by Toshio Hosokawa, consisted of quiet, floating, held notes in a soundscape environment. It was the one piece on the program that felt too short.

A set of Three Songs by Karl Hinze, a New York resident who describes himself as a musical theater composer, was given here in its first performance as a cycle. It’s not actually musical theater, in either content or style, though there is some influence. Soprano Susan Narucki sang with a simplicity and lack of vibrato that would have been appropriate for a musical theater venue. “Beauty School,” by far the most enjoyable of the three, was also the most theatrical, in a cabaret style with rhythmic snaps and bristles, especially from Alexandria Le at the poor, shuddering piano. Like Heggie’s, this cycle uses additional instruments: Furuta on flute and cellist Mohit Mansukhani completed the ensemble.

Two Walks on the Wild Side

There were two works for larger ensemble, six or seven mixed strings, winds, and percussion. A Song From Far Away, by Toshio Hosokawa, consisted of quiet, floating, held notes in a soundscape environment. It was the one piece on the program that felt too short. The other composer, Andy Akiho, could get a job dropping capital letters in product names for Apple after producing titles like to wALk Or ruN in wEst harlem. This title denotes a wild and imaginative work of eclectic influences appropriate for the Bang on a Can concerts for which it was written: Stravinskian and post-tonal modernism, a bit of jazz, a touch of minimalism, a little rock.

Flutist Elena Yarritu and pianist Margaret Halbig from this ensemble also got to perform the most venerable piece on the program, Le Merle noir, by Olivier Messiaen (1952). This is one of the composer’s numerous bird-inspired works, with plenty of avian flutters and chirps for Yarritu’s crisp flute, building up to a flurry of wing-flapping for both instruments.

Clarino’s synchronization was so crisp and imaginative that it upheld an illusion that he was generating the sounds through some invisible advanced cousin of the theremin.

That leaves, last but not least, percussionist Christopher Clarino. Besides playing fairly conventionally in both large-ensemble works, he had the opportunity to behave oddly in two solo pieces. Frederic Rzewski’s To the Earth, for speaking percussionist, had him intone a prayer to Mother Earth while kneeling on the floor, all the while tapping and rubbing four flower pots of varying sizes with mallets and his fingers. The limited set of notes available on this battery created a hypnotic pattern, just not hypnotic enough to prevent me from wishing the piece considerably briefer.

Aphasia, by the Stanford composer Mark Applebaum, was even less conventional and more fun. Here the percussionist makes no sound whatever, but performs a series of complex hand gestures synchronized to a prerecorded track of speech sounds and various occasionally amusing random noises. For the greater part of this piece, Clarino’s synchronization was so crisp and imaginative that it upheld an illusion that he was generating the sounds through some invisible advanced cousin of the theremin.

There was nothing about the composers in the program book, not even their first names, and only a couple of pieces were introduced from the stage, so finding out more about some of what I was hearing required a little extracurricular research. It was worth the trouble: The program was interesting, and the performances were outstanding.