On Sunday night, the ODC Dance Commons in San Francisco's Mission District was full of classical music's most coveted demographic — young people in their 20s and 30s. They had gathered to attend sfSoundSeries' latest installment of improvisation and new composition, including works by John Cage, Bruno Ruviaro, and Kaija Saariaho, with improvisations featuring guest saxophonist John Butcher.
At a time when even contemporary music ensembles often have difficulty attracting younger audiences, sfSoundSeries is a notable exception. This is probably due in part to its $5 tickets, but no doubt also to the vibrant, idiosyncratic playing of its performers, as well as its programming, which focuses on improvisation and experimentation. Sunday's program was no exception, with its mix of improvised and composed works, all featuring the vigorous, committed playing of this unique ensemble.

The program's first half included three composed works, beginning with Brazilian composer Bruno Ruviaro's colorful and humorous Seis vícios de garlândia, performed by Matt Ingalls on E-flat, B-flat, and bass clarinets; Monica Scott on cello; Loren Mach on percussion; and Christopher Jones conducting. Beginning with overlapping glissandos that evoked whimpering dogs (in the best sense), the piece proceeded through a variety of vivid and surprising sounds, all executed with facility and panache by the performers.

Next on the program was Finnish composer Kaija Saariaho's Sept Papillons for solo cello. This work is a collection of airy, floating sounds, making extensive use of natural harmonics, tremolos, and ponticello bowing close to the instrument's bridge piece to evoke the fleeting motion of butterflies. Cellist Monica Scott expertly navigated her way through the rapidly shifting techniques and colors with an excellent sense of pacing, giving this delicately radiant music the space it needed to breathe without losing its momentum.

Closing the first half was John Cage's 1990 work Fourteen, scored for a mixed ensemble of 14 instruments. This is one of a set of almost 50 works that Cage composed near the end of his life that contain events — in this piece, single sustained pitches — with a "time bracket" indicating a time range during which the performers can decide to begin and end the specified note. The notes were chosen through chance operations, so the resultant harmony from the overlapping pitches is, in effect, random. Basically, the piece is 20 minutes of primarily delicate, self-contained sounds, with the rich resonance of a bowed piano, ably performed by Christopher Jones, acting as the center of the texture.

I have heard these sorts of Cage pieces before, and I usually think they are interesting ideas, in theory. But for goodness sake, do we really have to listen to them all the way through? Can't we just listen for two minutes and get the gist of it? I did not feel that way this time, however, for the ensemble played with such careful attention to the sounds they were making that I couldn't help but be drawn in and ponder each note as it arose, blossomed, and died, sometimes interacting with notes from other instruments, sometimes standing alone. It helped that the ensemble was spread out all around the large performing area, adding a captivating spatial element to the piece, as notes emanated from different corners of the hall.

This performance illustrated part of what makes this ensemble so effective: They are so deeply committed to the aesthetic principle of appreciating sound as sound, and communicate this so compellingly, that even audience members like me who might tend to be skeptical get caught up in it and are able to appreciate the simple pleasure of sound for its own sake.

A note in the program dedicated the performance of Fourteen to the memory of Toyoji Tomita, the longtime sfSound trombonist who died suddenly this past April. It was a touching and fitting tribute.
Dazzling Improvisation
The entire second half of the program was improvised, beginning with two solo improvisations by guest saxophonist John Butcher, from London. Both solos, the first on tenor and the second on soprano sax, featured a dazzling array of carefully controlled and integrated extended techniques, from flutter-tonguing to growling, to high whistles, to sucking sounds and pitchless slaps, reminiscent of beat-boxing. Especially noteworthy were the endless variety of harmonics and overtones that Butcher generated, and the smoothness with which he moved between "normal" sounds and these multiphonics. 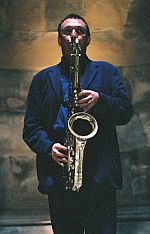 Indeed, one of his greatest strengths was that, despite the immense vocabulary of unusual sounds he had at his disposal, Butcher remained willing to use traditional melodic and motivic materials, as well, seamlessly integrating these with the extended techniques. Toward the end of the second improvisation, he created a truly contrapuntal texture, with various overtones moving against each other to form clearly independent melodic lines — quite a marvel to hear coming from a supposedly single-line instrument.

The concert closed with a group improvisation structured by Butcher for himself and the entire sfSound lineup — 11 players in all. The group improvisations are often my favorite part of sfSound concerts, and while this one was certainly good, it did not live up to the usual high standards of the group. There was no shortage of interesting textures floating around, most notably a delightful cacophony of squawking, squealing, and chirping that erupted from the four woodwinds at one point, and the seemingly endless variety of items with which percussionist Gino Robair attacked his drums, from a bass bow to spinning wooden dowels and metal rods, to some sort of vibrating green object (don't ask).

What was missing, though, was the sense of near-telepathic connection and group sensitivity that often characterizes the ensemble's work. Perhaps it was the sheer size of the group (definitely on the larger side of the group improvisations I've seen them do), or the difficulty of integrating a guest into the mix, or maybe they just weren't "on" that evening. That's the danger (and the joy) of improvisation: You never know quite what you're going to get. This is also one of the great joys of this ensemble, which, above all else, brings a refreshing sense of experimentation and risk to its performances.