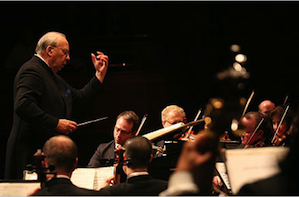 Stanford Live welcomed on Saturday the first guest professional orchestra to play a full concert in the new Bing Concert Hall since it opened last January. The Estonian National Symphony Orchestra, under its venerable yet still commanding Principal Conductor Neeme Järvi, played at a full strength of about 70 musicians. This turned out to be just the right size for Bing’s combination of lively acoustics and a small space.

The only acoustic difficulty I noticed from my seat directly facing the cellos is that it meant they were not facing me. The result was that, from this location, the string sound was violin-heavy. This was a bit regrettable in the Cantus in memoriam Benjamin Britten by the Estonians’ countryman Arvo Pärt, which depends on precise string balance. It mattered less in the other pieces, the Symphony No. 5 by Jean Sibelius from Finland, that kindred nation right across an arm of the Baltic Sea from Estonia, and the Cello Concerto by the Czech Antonín Dvořák. All of the works came out rather alike; there was no strong flavor of the individual composers in the sound.

Järvi took the concerto in a generally placid, rhapsodic manner, punctuated by occasional hard little fortes. The Sibelius was driven forward with strong accents at times, particularly in the first movement, yet it still kept a serene side. The soft, lush French horns that so enriched the opening of the Dvořák were a little more unexpected applying a similar gentle approach to the mighty swinging “Thor’s Hammer” theme of Sibelius’ finale. Even being joined by the trumpets and trombones didn’t change it much.

The woodwinds, by contrast, were emphatic and piquant all the way through both works. They sounded like a contingent entirely of oboes: The sound was that strong.

The violins offered a lightly rough, sandy tone for their sadly keening descending scales in the Pärt. This was replaced with a smoother string sound for the other pieces. Sibelius showed the strings at their best. A blindly wandering passage in the first movement, for instance, was rendered strong by intricate interplay among the string sections. Less frequently, they were at their poorest. Some of the strings were not together for the first bar of a rumbling passage in the finale. Järvi impatiently rapped a music stand with his baton, and they quickly shaped up.

My greatest accolade goes to a single note on a yet unmentioned instrument, the funeral bell, played by Terje Terasmaa, which is the only accompaniment to the strings in Pärt’s Cantus. Its final note is intended to be struck inaudibly while the strings are still letting out their final chord fortissimo, and then to ring out, already there in the silence, after they suddenly stop. Both parts of this worked to a charm, the bell suddenly flashing loudly in the stillness, its overtones growing and then fading away for a long, enrapturing time.

The solo cellist in the Dvořák was Narek Hakhnazaryan, a young Armenian with an attractive lyric tone, a flair for flourishing his bow, and a forthright way of cutting off notes. For an encore after the concerto, he played what sounded like a piece of ancient folk music, in alternating slow and fast sections, featuring extremely bent notes, and with wordless drone singing by the performer. This turned out to be an original composition of only 15 years’ existence, Lamentatio by Giovanni Sollima, a folk-influenced, post-minimalist Italian composer and cellist. It was strange and captivating, and made a change from the usual encore of Bach or a solo-cello arrangement of some other better-known piece.

After the symphony, which ended the concert, Järvi looked doubtful as to whether he wished to favor us with an orchestral encore, then offered 75% of the slowest version of Sibelius’ Valse Triste on record. Taking the score’s tempo markings with a dogged literalness, Järvi lurched faster a few times, reaching almost breakneck speed in the main forte. This only made the piece sound weirder. It was followed by a more evenly vigorous rendition of the same composer’s Andante Festivo.