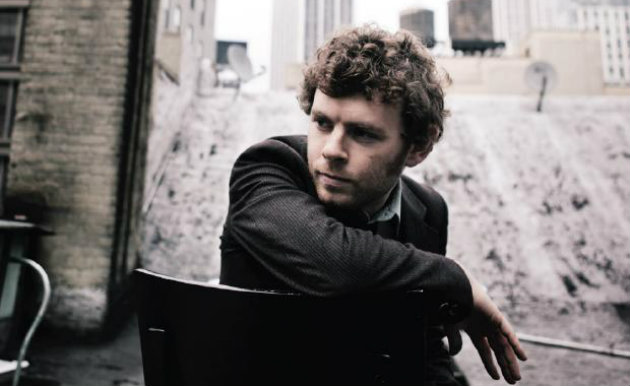 It’s hard to pigeonhole Gabriel Kahane; the Brooklyn musician straddles the line between “singer-songwriter” and “composer.”

On the one hand, Kahane has recorded albums in the vein of Sufjan Stevens or Joshua Michael Tillman — folk-inflected pop and rock that is intelligently arranged and produced. On the other, he has penned “classical” works for chamber ensembles and solo piano, including his 2005 song cycle Craigslistlieder. In his Friday, Jan. 29, appearance at Stanford’s Bing Concert Hall, joined by the Brooklyn Rider string quartet, Kahane further blurred the line between his two musical personas in a concert of his own compositions and pop songs, with some Schubert thrown in for good measure.

Schubert, in fact, was the inspiration for the evening. From the stage, Brooklyn Rider violist Nicholas Cords described the now-legendary Schubertiades — informal salons during which Schubert and his friends would perform the composer’s lieder and quartets. To recreate that atmosphere, Brooklyn Rider interspersed the individual movements of Schubert’s Rosamunde Quartet with Kahane’s pieces performed in between, as was done in the original Schubertiades.

It was a nice alternative to the rigid structure of a typical concert, and it felt good to fly in the face of convention and clap after each movement.

While Brooklyn Rider is primarily known for their performances of contemporary string quartet repertoire, their Schubert was subtly yet stylishly executed — perhaps too subtle in some spots. In the opening movement, first violinist Johnny Gandelsman seemed caught up in blending with his cohorts and ended up stifling what is essentially a solo vocal line for violin.

When they weren’t playing Schubert, the quartet accompanied Kahane while he sang at the piano or with electric guitar in hand. His pop tunes are hit-and-miss, and many in the concert, unfortunately, were nothing special. Part of the problem may be textual. Kahane is a musical storyteller — his songs are a cross between cabaret numbers and folk ballads that indulge in esoteric poetic images à la Bob Dylan sprinkled with a heavy dose of Americana. Yet like Dylan, Kahane writes rather wordy lyrics that are difficult to set elegantly. As he performed his 2011 song “Last Dance,” for example, the melody seemed to stumble over clunky lines like “all I want is a face to hold / and love and light and sex / and cigarettes.”

But this isn’t to say Kahane is incapable of crafting a quality song. One of the highlights of the evening was his nine-minute tour-de-force “Empire Liquor Mart (9127 S. Figueroa St.)” from 2014’s The Ambassador. Kahane’s lyrics — now more straight-to-the-point and less verbose — detailed the 1991 shooting of 15-year-old Latasha Harlins in a Los Angeles liquor store. In a particularly poignant passage, Kahane sang the line “I float higher and higher” in a delicate falsetto, vividly depicting Harlins’ spirit ascending skywards. The stylistic shifts of "Empire Liquor Mart" were delightfully surprising twists and never felt chaotic or jarring.

“Empire Liquor Mart” also demonstrates Kahane’s musical eclecticism and his unique ability to smoothly navigate various musical genres in rapid succession. The opening melody of the song, for example, could have been straight out of an Appalachian folk song. Yet it soon transformed into a bluesy soul or gospel lick, which suddenly moved toward R&B and hip-hop before returning to the opening folk tune. These stylistic shifts were delightfully surprising twists and never felt chaotic or jarring.

Kahane carried this musical approach over into his more classical-oriented compositions, particularly in his song cycle Come On All Your Ghosts for voice and string quartet. Brooklyn Rider recently recorded the piece with Kahane for a new album, The Fiction Issue, which will be released Feb. 5. The cycle’s three movements are settings of poems by Bay Area poet Matthew Zapruder. Kahane selected Americana-filled poems reminiscent of his own song lyrics, yet his text-setting skills were vastly improved thanks to an expanded musical palette.

As in “Empire Liquor Mart,” Kahane bounced from genre to genre, reflecting the text’s changes in mood, though he was no longer confined to the realm of pop music. While he certainly drew on his popular roots, he also showed a familiarity with minimalism, jazz, and avant-garde extended string techniques — all of which were present in the quartet accompaniment. In the work’s final movement, “April Snow,” a Bartókian Eastern European folk dance was combined with downhome country fiddling from Brooklyn Rider while Kahane’s vocal line called to mind an off-Broadway show tune.

Kahane pushed this kind of musical collage to an extreme in his string quartet Bradbury Studies, which is also be featured on the new album. In what he called a “sadistic” quartet arrangement of his “Bradbury (304 Broadway)” from The Ambassador, Kahane allowed only snippets of the song to emerge in the string parts. However, these shards of tonal melody were soon buried beneath minimalist riffs or barrages of snaps, squeaks, and sawing from the players.

The work is a fine summation of Kahane’s musical eclecticism. He has a strong and promising compositional voice that incorporates his pop background but is not limited by it. Kahane may want to consider picking up composition as his full-time day-job and leave the songwriting to other artists.