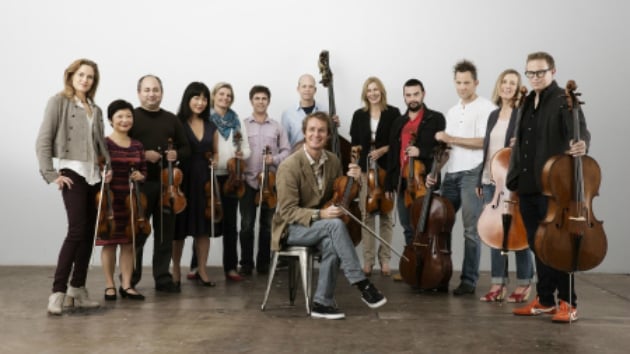 The Australian Chamber Orchestra came to Bing Concert Hall on Friday for a Stanford Live program with a repertoire that could be described as Mostly Mozart.

The concert was bookended with symphonies in G Minor by Mozart and his great contemporary, Haydn: Mozart’s No. 40, K. 550 and Haydn’s No. 83, popularly known as “La Poule” or “The Hen.” Despite their minor mode, unusual at the time, they’re both lively and fairly cheerful. Mozart’s is the more ambiguous work emotionally. Haydn’s, not as often played as it deserves, is one of the most charming of his later symphonies.

The Australians, led by concertmaster Richard Tognetti, dove into both works with vigor and liveliness. All the tempos were fast, particularly in the slow movements. What distinguished these performances were the dynamics. The Australians played with constant adjustments in loudness in the way that performers a century or more ago would play with constant minor shifts in tempo. It was far more elaborate than anything marked in the fairly plain scores.

Tiny swells, larger swells, sudden dips, heavy accents, crescendos built on top of fortes, and other such devices appeared frequently throughout both symphonies and the finale of Mozart’s Symphony No. 29 in A, which was played as an encore. It was quirky because the choice of notes or phrases to be emphasized, or radically de-emphasized, was not obvious or predictable. It also was conspicuous almost to the point of obtrusiveness.

Considering all the care and consideration that must have gone into planning these effects, it’s odd that when passages repeated – which happens frequently in this repertoire – so did the orchestra’s dynamic quirks, basically verbatim. Without any reconsideration or variation in style, the da capos and recapitulations were deprived of any reason for existing. The result was that, though continuously lively, these performances began to get a little dull.

Regardless of that complaint, this is a talented and disciplined ensemble. The sound from the small group – 24 players in K. 550 – was strong and full. The winds had a lovely, slightly crusty sound that I associate with the performance of earlier Haydn works. String tone stayed far away from either darkness or shrillness, and the ensemble was usually impeccable. I think I caught one moment in K. 550 when several players barely stopped themselves in time from skipping ahead a few bars.

A third composer rounded out the program: Jonny Greenwood, not the first name listeners would associate with Mozart or Haydn. Greenwood is English and is best known as a member of the rock band Radiohead, whose songs often bear the imprint of Greenwood’s interest in the music of Olivier Messiaen and György Ligeti. To listeners who don’t follow rock, Greenwood may still be familiar as the composer of the often eerily modernistic score for the Oscar-winning film There Will Be Blood.

His 15-minute composition Water was unlike those other works of his. Though entirely modern in idiom, it was largely consonant, with its dissonances buried deep in the harmonic structure. Melodic lines, sometimes solos for Tognetti’s violin, would seep out of a pond of overlapping ostinatos, a Ligeti-like effect. Towards the end of the work, more jagged rhythms began to appear.

The shimmering sound and modal harmonies that dominated the music gave an air reminiscent of Messiaen and even more, I thought, of the Finnish composer Einojuhani Rautavaara. Through much of the work, an Indian flavor also permeated the music, in the form of an ambient backing from tanpuras (Indian lutes) — one live, played by Vinod Prasanna, and one pre-recorded.

I had a little more trouble with the structure of the work. Though the program notes gave a summary of the music’s events, I found it difficult to keep track of where we were. Nor did the successive sections give a sense of inevitable or assured succession.

Nevertheless, I’ve found Greenwood’s classical compositions, even when bristly, to be consistently compelling and interesting. I’d much rather listen to such music as this than to any more Radiohead.