With pianist Peter Serkin as its guest artist, the Orion String Quartet brought a pantheon of composers to its Stanford Lively Arts concert on Wednesday at Dinkelspiel Auditorium: Bach. Beethoven. Brahms. ... And Leon Kirchner. 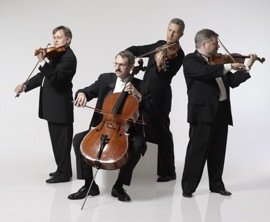 Which of these names doesn’t quite belong with the others? Proponents of musical modernism have long tried to convince audiences that modernists like Kirchner are the worthy heirs to the Three B’s. But 40 or 50 years ago they’d pursue this goal by haranguing you. Cryptic, alienated atonality was the music of our time, the critics said, and if you didn’t like it, the fault was yours. That didn’t go over very well.

While some voices still take that view, the rise of minimalism and neoromanticism have convinced others that times have changed. Even Leon Kirchner was willing to meet the latest trend halfway. After some five decades of composing choppy, knotty music of the most austere modernism, in 2006 at the age of 87 he produced his String Quartet No. 4, a single, 12-minute movement of voices moving together in smooth, consonant lines: an essay in coherence rather than fragmentation. The harmonies are hardly a complete capitulation to lush romanticism, though. Kirchner carries with him his modernist past whether he wants to or not, the way a long-held image can be burned into an old computer monitor. His quartet still sounds determinedly “modern,” for all that music more “advanced” than this has been written for over a century now. The applause it received at Stanford was no more than respectful.

What made this piece work in this concert, which I thought it did surprisingly well, was the performers. The Orion String Quartet are four serious-looking gentlemen who play a serious quartet. For all the grace and variation in style they gave this piece — I especially liked the sections where first violinist Daniel Phillips would turn through a series of short phrases, each echoed by the other players — they treated it as deserving of the utmost profundity and solemnity. And they performed the works surrounding it in exactly the same way, so the differences in idiom did not clash.

The program opened with a quartet realization of Contrapunctus I from Bach’s great theoretical composition The Art of Fugue. Well, a fugue: How serious can you get? The contrapuntal lines gave a good opportunity to learn the players’ styles. Second violinist Todd Phillips is Daniel’s brother; they both play Stradivari instruments; they sound a lot alike, a firm, fairly light sound. Todd is perhaps the more emotive and lyrical of the two.

The other two players have a much darker tone. Seated on the left, as I was, facing the viola and cello, this seemed to me a bottom-heavy quartet. Timothy Eddy plays his cello (by the great 18th-century Venetian Matteo Goffriller) with the utmost crispness and clarity, rumbling out repeated bottom notes almost pianistically. Steven Tenenbom has the most unusual instrument: an oversized, 16th-century viola, one of the first modern ones ever made (by Gasparo da Salò), with a dry, antique sound.

The Beethoven Beautifully Introspective The Kirchner was followed by Beethoven’s Quartet in E-flat, Op. 74. This could have come as a cultural clash of great magnitude, for this quartet can be light, coy, and bouncy. Not this time. The Orion Quartet played with deadly earnestness. Daniel Phillips made his long solo at the end of the first movement sound like a return to Bach, 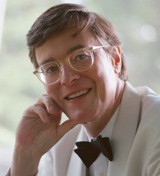 and he systematically eradicated any trace of “snap” from his part in the scherzo. It seemed part of a concentrated effort to give the work a searching, introspective quality, beautiful without being overtly melodic. The performance was not without flair. Pizzicato notes were passed around with charming spontaneity, and the tone color was always compatible between the instruments while varying across the piece: cool and organlike in the slow introduction, crisp and fiery in the scherzo, with a consistently hushed sound to the final repeat and a lovely ritard at the end of the movement.

The quartet was joined by pianist Peter Serkin for Brahms’ Quintet in F Minor for Piano and Strings, Op. 34. The Phillips brothers exchanged violin parts for this, with Todd as first and Daniel as second, while Serkin essentially took over Eddy’s role as the energetic foundation of the ensemble. Stomping on the keys (and on the sustain pedal as well) during the louder parts, he played, like Eddy, with supreme clarity and separation of notes, as well as a marked disinclination to roll chords. Not a touch of Brahms’ characteristic rumbling muddle was evident here. The strings played the opening melody of the slow movement similarly, with the notes entirely detached. This approach followed on from the opening movement, which the players took very slowly, almost cautiously. It was a strange performance, yet an oddly compelling one. Nor did it lack character or enthusiasm: bright in the middle section of the slow movement, strongly energetic in the scherzo, and entirely cheerful once the finale gets going, with distinctive melodic work from Eddy and Tenenbom.

While Brahms received the most applause, all four composers on Wednesday’s pantheon were treated with admirable care and attention.