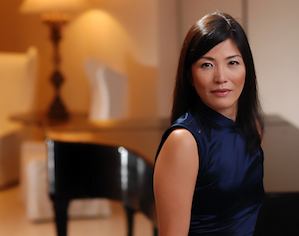 Good pianists may be found in unexpected places. Cecile Licad comes originally from the Philippines; she was to be found on Sunday in the McAfee Center, a glorified high-school auditorium in Saratoga with more carrying and responsive acoustics than is typical of the breed. The Steinway Society of the Bay Area presented the concert; it regularly brings excellent and interesting pianists to the San José area.

Licad’s program comprised two planned large-scale, multimovement works by pianist-composers more usually heard in assorted miscellanea. The first volume (depicting Switzerland) of Liszt’s Années de Pèlerinage is a set of nine scenic portraits, of which the largest and best-known is “Vallée d’Obermann.” Chopin’s Sonata No. 2 in B-flat Minor, Op. 35, is the one with the famous “Funeral March” for a slow movement.

The difference between Liszt and Chopin, at least as demonstrated in these works, defies the popular stereotypes. It’s not that Liszt is extroverted and Chopin introverted, and still less is the expanded simple picture true that Liszt is a flamboyant show-off while Chopin is wispy and tubercular. In Liszt’s Swiss suite, Licad presented him as both more display-mad and more gentle than Chopin. It depended on the particular music. In the loud pieces — the opening “Chapelle de Guillaume Tell” and especially “Orage” (meaning “storm”) — Licad rampaged over the keyboard, delivering huge expressive sweeps with rushing waves of emphasis, increasing fury into devilish anarchy. Rumbling noises the likes of which are rarely heard came out of the piano. Rhythms were freely flexible, moving beats back and forth. This, I thought, must have been what it was like to hear Liszt himself play, making audiences swoon.

This, I thought, must have been what it was like to hear Liszt himself play, making audiences swoon.

For, however much Licad gave the impression of complete chaos, she was in fact in control of her playing. This was evident in the care she took to make melodic lines coherent and grandly expressive, and to ride clearly over their accompaniments. Then, in the peaceful pieces, she was exceedingly quiet. The piano’s sound was soft and hidden, with a grace evident even in the movement of her hands. The music twinkled in the manner of Tchaikovsky fairy music. Isolated high notes thrown in by Liszt as punctuation rang out clearly. In the main section of “Pastorale,” the melodic line sputtered as Licad pushed the rhythm back and forth; elsewhere it flowed smoothly, particularly in the middle section of the same piece, where what other pianists play as a dialogue between two contrasting figures became, in Licad’s hands, one rippling continuum.

The most interesting playing came in Liszt’s pieces of intermediate or mixed character. “Vallée d’Obermann” was relatively heavy from the beginning, turning to extremely gentle where the music is marked “dolcissimo.” “Le Mal du pays” (Homesickness) was quizzical and enigmatic in flavor. The closing “Les Cloches de Genève” opened so softly that it might have been inaudible in less-forgiving acoustics. Later, arpeggiated bass chords rumbled, the melodic line turned grand, and the music whooshed through until its relaxed conclusion. The entire composition had been a magnificent journey.

The dynamism that so enlivened Liszt’s fast pieces did not work so well in the more-clotted textures of Chopin’s opening movement. Licad lost the melodic thread as she rushed through the music, except for when she slowed way down for brief sostenuto passages. I believe this is the only performance I’ve heard in which the pianist included the brief slow introduction when repeating the exposition. (Read literally, the score dictates the inclusion.) Licad ran through everything so quickly that it hardly made a difference.

The Presto finale whizzed by like a brief, quiet whirlwind.

Chopin’s middle movements fared better. Although the scherzo was still rushed and clotted, Licad brought more variety and some of the sense of the music’s swing that she’d shown in the Liszt. The “Funeral March” was particularly fine: a steady tread with a stable rhythm, not too slow, presenting the theme plainly, and strikingly downplaying the added grace notes. The trio of this movement was presented with the kind of soft, gentle contemplation that had been heard in the Liszt, and that the scherzo’s trio had never really achieved. The Presto finale whizzed by like a brief, quiet whirlwind, as it does in most performances.

After the enormous scope of the Liszt, Chopin’s sonata seemed almost a tiny thing by comparison. Licad redressed the weight balance of the two halves of the program in her encores, for which she played, in separate curtain calls, no fewer than three witty and tuneful Bartók folk dances.