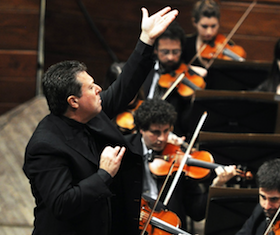 Sure, the poems are all in medieval Latin or Middle High German, and the audience couldn’t be expected to understand them. (There were no distracting supertitles.) Vieu nevertheless had the singers express the words, and they succeeded in doing so with only the slightest touch of acting-out on stage.

It’s spring in Carmina Burana, as it now is outside, and the poets’ fancy turns to thoughts of love. That much was clear to everyone, and it was most obviously shown in the expressively erogenous “Tempus es iocundum.” Baritone Ralph Cato turned to soprano Christina Major and formally serenaded her with ardent declarations, which she returned bashfully. At the end he presented her with the rose from his lapel, giving a plot impetus for her succeeding stand-alone line giving herself to her lover.

“What lover?,” a listener might ordinarily wonder. This time, the answer was clear. In Vieu’s driving interpretation, it became narratively inevitable that the chorus should immediately hail this consummation with its hymn to Blanziflor and Helena, and that the following concluding reprise of “O Fortuna” should make an imposing picture frame around an altogether exciting performance.

The baritone has the most solos, and from the beginning Cato’s smooth, clear voice was focused on telling you what he had to say with the utmost clarity. Gestures and eye contact with the audience reinforced this. He stayed in steady touch with the orchestra, and his falsetto in “Dies nox” was as strong as his deep and middle registers.

Cato’s finest moment, of many, was the song of the Abbot of Cockaigne. Without overacting, he smuggled out his solo with devilish zest. The interjections of orchestra and chorus merged with it seamlessly, and Cato smiled conspiratorially as he concluded the Abbot’s declaration that he’s the stoutest drinker of them all.

Without overacting, Cato smuggled out his solo with devilish zest. The interjections of orchestra and chorus merged with it seamlessly.

Tenor J. Raymond Meyers had just one part: the unforgettable lament of the roasting swan. This he gave in the same spirit as Cato’s solos, as if he were really suffering, loudly and gloriously. The strain and agony are what make this number gruesome fun.

Major, wearing a glaring red dress perhaps inspired by the tunic of the girl described in her first big solo, “Stetit puella,” had less room for characterization in her solos, at least before “Tempus es iocundum.” Her voice, though, was both as sweet and as strong as could be wished.

The choruses outstripped even the soloists in awesomeness. The SSV Chorale was guest-directed by Lou De La Rosa, as Elena Sharkova was occupied with the Cantabile Youth Singers, of which she is also music director. The Chorale enunciated its lyrics with a clarity that overwhelmed its position far off at the back of the stage, and with a unity so precise that its hundred voices would have seemed a far smaller group were it not for the size of the sonic volume. There were fascinating unusual emphases, and revelations of inner parts rarely audible in other performances.

A few passages against tutti orchestra could have been better balanced; overall, though, the choral performance was shiningly clear and energetic. All parts of the choir were superb. The most stunning achievement belonged to the men, for bringing that clarity and enunciation to the speedy tongue-twister “In taberna,” and even more to the unaccompanied piece for a subset of men, “Si puer,” where these nonprofessional singers at the back of the stage were as strong and artistic as Cato at the front.

The Cantabile Youth Singers, a coed group a bit older than the usual boys’ chorus, were equally admirable, adolescently lusty in their bawdy lyrics.

The choruses outstripped even the soloists in awesomeness. … The Chorale enunciated its lyrics with a clarity that overwhelmed its position far off at the back of the stage.

Vieu conducted the orchestra into raw vigor, producing mighty thumps and clangs from brass and percussion for that primitivist “Roman Empire sound,” as much reminiscent of Respighi as of Stravinsky or Prokofiev. If there was a flaw, it was that Vieu relied too much on the words to convey the structure. There wasn’t always sufficiently purely musical reason for the repeated strophes. This caused some slower movements to drag a bit. He did, though, wrap the work up at the end with a satisfactorily tidy ribbon.

The concert also featured another gentleman from Vieu’s native Argentina, bandoneón virtuoso Juan Pablo Jofre. Informally dressed, with white-framed dark glasses, he played his own concerto, Tango Movements. Unlike other bandoneón composers — I’m astonished at how many works for this instrument I’ve heard in the San José area over the past few years — Jofre emphasizes less the melodic lyricism of his button accordion than its kinship with the pump organ. He likes heavy dramatic chords and crisp, repeating rhythmic figures. Even his extended melodies, rather pop-song in style, are more fully chordal than is typical for the bandoneón.

Jofre has been revising and polishing this concerto for nearly a decade, and perhaps it’s overworked. It has some lovely moments, especially a series of quiet duets with solo violin and cello playing rocking figures. It goes on way too long, though, especially in an extended passage that’s technically a cadenza, though it doesn’t function or sound like one. It’s a long, wandering solo seemingly designed to make the listener drift gently off.

Don’t worry: If anybody were to nod off, Carmina Burana would wake them up in a hurry.