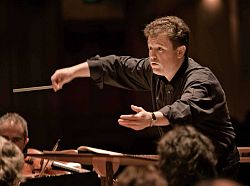 I’m not sure which orchestra it compliments more to say that Symphony Silicon Valley’s concert on Saturday, at the California Theatre in San José, reminded me of a Redwood Symphony concert. There were the exploration in the obscure but worthy corners of the repertoire; the distinct Eastern European flavor — in this case, Hungarian and gypsy (Romani) — to the selections; and the young and dazzling solo performer.

Guest conductor Gregory Vajda, who has led SSV several times before, used this program to display proudly his own Hungarian origins in his audition concert last year for the music director post at Music in the Mountains in Grass Valley. Some of SSV’s musicians performed in that concert, and they recommended the program to SSV’s president and effective music director, Andrew Bales. Vajda won the job at Music in the Mountains, and brought his prize program to SSV as something a little bit different from their usual run. Three works by modern Hungarian composers of the same generation, plus three by foreigners evoking the country, were saved from being too much of the same thing by liveliness and a riot of orchestral color. 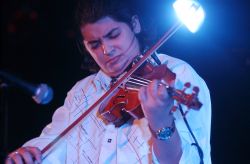 First stop on our tour of this program should be with the soloist, Lajos Sarkozi. Only 19 years old, this fluent Romani violinist was discovered by Vajda a couple years ago, playing in his father’s band in a Budapest restaurant. He is also a student at the Franz Liszt Academy in that city, and he is now making his second American tour under Vajda’s direction. He played two brief showpieces by foreign composers evoking his people’s music. He gave a passionate drive and flow to the line in Ravel’s Tzigane, especially in the unaccompanied cadenza that opens the piece, but he had trouble finding an appropriate tone color to play the piece in. Emphasizing the dark and heavy side, sometimes too much so, he lacked heft in the high passages and harmonics.

Sarkozi was much more at home in Pablo de Sarasate’s Zigeunerweisen. Whip-sharp runs, caressing glissandos, and vicious pizzicato notes enlivened his assured and elegant line in the slow opening half, and when he got to the Allegro molto vivace, Sarkozi simply took off, playing so fast that he was slightly outrunning the orchestra. Alternating stopped and pizzicato notes in this section shows off the left hand technique. Appropriately, then, Sarkozi chose an encore, a recitative and scherzo by Fritz Kreisler (apparently: I was told it was Rodolphe Kreutzer), that emphasized bowing technique instead, particularly staccato notes and double stops.

Inserted in the middle of the concert and listed in the program, but played as if they were an orchestral encore — with Vajda hopping onto the podium and starting right off, and the needed extra players entering and leaving the stage as the music was going on — were three of Brahms’s Hungarian Dances, Nos. 1, 3, and 10, which happen to be the three that the composer chose to orchestrate himself from the piano originals. The playing swelled and receded, ebbed and flowed, paused and rushed, with ease and graciousness.

Compared to this, the modern Hungarian works, being less familiar to the musicians, were at times a little stiff. Yet they were generally well-played and made interesting listening. They represented the nation’s three leading composers of the early 20th century — and all three of them, like Sarkozi and Vajda, too, at one time studied at the Franz Liszt Academy. Ernst von Dohnányi, who preferred this German form of his name, mostly wrote Germanified music. His suite Symphonic Minutes, though, sounds more French or even Russian. Scott MacClelland’s program notes astutely compared the work to Tchaikovsky’s orchestral suites. It ran from a raucous capriccio through a majestic theme and variations to a fleet rondo finale.

Dohnányi’s colleagues Béla Bartók and Zoltán Kodály were pioneering ethnomusicologists in Hungary and the Balkans, as well as important composers. Their works on this program were vigorously nationalistic. Bartók’s Hungarian Sketches is a suite with a distinct humorous side: one movement is a heavy “Bear Dance,” while another, containing a lot of abrupt tempo variations, is described as “Slightly Tipsy.” Kodály’s Dances of Marosszék is based on a broad, slow, folk tune and is generally more stately than his better-known Dances of Galánta. Not quite Dohnányi’s equal in orchestral color, it’s filled with even more solo passages.

These were bright in all three works. From the wide, smooth English horn (Patricia Emerson Mitchell) in both slow movements of the Dohnányi, and the harp (Dan Levitan) that contributed so much to the Russian quality of the work’s sound, to the gorgeously liquid clarinet (Michael Corner) and oboe (Pamela Hakl) in the opening of the Bartók, the impact of the tuba (Tony Clements) in its “Bear Dance,” and Kodály’s conspicuous solos for every instrument on the scale, all the way down to the double bass (William Everett), various instrumentalists did their star turns. Levitan also had a major part in Tzigane, so conspicuous that his harp was moved to the front of the stage so that he could be a second soloist, matching his crisp finger movements with Sarkozi’s.

Entire sections did well, also. Although at times the winds and brass together overbalanced the strings, in the Bartók in particular the strings were vivid and clear in their snaps and metallic shivers. Altogether, the evening was a solid and thoroughly enjoyable outing to Hungary. Bring on the paprika goulash and the violinists to play while we eat it.