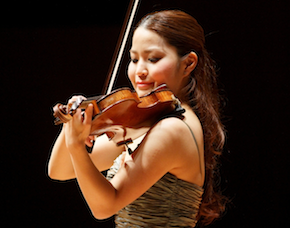 Mayuko Kamio, solo violinist at Saturday’s Symphony Silicon Valley concert at San Jose’s California Theatre, first appeared with the orchestra last June as an emergency fill-in soloist. Because her listeners were impressed with her performance of Edouard Lalo’s Symphonie Espagnole then, she was invited back to perform Tchaikovsky’s Violin Concerto under Gregory Vajda’s baton this week. She stopped in on her way to Oslo to perform at the Nobel Peace Prize ceremonies.

So this was something of a star visit to what is still a somewhat provincial musical center in San Francisco’s shadow. Kamio was a child prodigy who won the Menuhin Competition at age 12. Few save Menuhin himself are that accomplished so young. Now a mature 27, Kamio plays with an intensely tragic facial expression and a highly distinctive violin sound. It has a strong, deep lower tone, as rich as a viola’s, with a shiny lacquered top sound that lets through a middle of smooth wailing, as if Kamio has a seductive siren or banshee trapped inside her instrument. Her individual notes vary in sound quality — some are strong, some thin, some unexpectedly ring out with a metallic sheen — yet overall her sound is firmly even.

In Kamio’s interpretation, Tchaikovsky’s slow-movement canzonetta had a mournful, lamenting quality, emphasizing the impression of a spellbinding banshee in the violin. Otherwise, especially in the first movement, she plowed straight ahead without much variation or character in expression. Strength and fluency in sound are fine things, yet a sense of personal connection to the music would help, as well. Nor did Kamio seem to connect with the orchestra behind her, and not just emotionally, either. Sometimes she was off on a rhythmic pulse of her own.

Nor did Kamio seem to connect with the orchestra behind her, and not just emotionally, either.

It would be a pity to neglect that orchestra, which was playing the concerto’s accompaniment quite nicely in a restrained, sober, clean-lined interpretation. This Tchaikovsky was not highly emotionally charged, nor did he sizzle, even in the lively finale; instead, he was a purveyor of simple, undecorated beauty. The winds in the slow movement were particularly dulcet. While marveling at Kamio’s strong and distinctive playing, I found myself appreciating each tiny, poignantly beautiful flute solo from Maria Tamburrino more than anything else.

The other half of the concert put the orchestra’s clear mode of well-crafted music-making to the service of classical and neoclassical repertoire.

SSV’s programmers stuck their necks out a little in choosing Igor Stravinsky’s Symphony in C. It’s not one of his popular works. It was little played when it was new in 1940, despite the composer’s fame, and it’s not played much now, either. I’m not sure I had ever heard it in concert before. It’s spiky as a porcupine and dry as a fine wine.

I found myself appreciating each tiny, poignantly beautiful flute solo from Maria Tamburrino more than anything else.

This performance combed its quills down and gave it a civilized demeanor, and also gave it the humanity and personality that’s sometimes missing from Stravinsky. From Pamela Hakl’s oboe in the angular opening theme on, all the instruments were bright and shining without harshness. The result was instantly recognizable as characteristic Stravinsky.

The remaining work is one of its composer’s most popular, Mozart’s Serenade in G, K. 525, “Eine Kleine Nachtmusik.” For this, conductor Vajda employed a reduced orchestra of 19 string players. He led a completely accomplished, perfectly civilized performance, with the tempo in the Romanze slow movement a little on the fast side. It was not revelatory, as the Stravinsky was; it hardly needed to be. Perhaps it would have been ideal if the violins had been a little more mellow in tone. As it was, it was still a pleasing, straightforward account.

All three works received respectable applause. (And Kamio responded to hers with an encore, Paganini’s Caprice No. 17, that showed off her style with alternating deep double-stops and light figurations.) That’s what this was: a respectable concert.