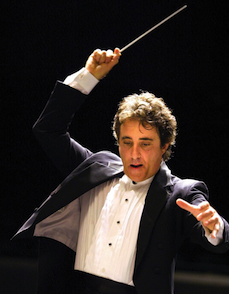 Symphony Silicon Valley began its season on Saturday with a concert geared for popular appeal. And it worked: San José’s California Theatre was packed with an appreciative audience. Paul Polivnick, a regular guest with the orchestra, conducted.

The program contained three repertoire favorites and one ringer. The ringer was Rossini’s Overture to Torvaldo e Dorliska, from 1815. Although this is not one of the dozen or so Rossini overtures that are commonly played, listeners may think they’ve heard it before, as there’s one theme that may sound awfully familiar. What happened is that Rossini, an economical composer and often on short deadlines, lifted and adapted that theme for the overture to another opera a few months later, and then repurposed that overture for yet another opera a few months after that. It’s by that last opera’s name, La cenerentola, that the second overture is now known, and that’s where we’ve heard that theme from Torvaldo e Dorliska before.

Torvaldo had it first, though, and there’s no reason not to listen to this version. The overture is on the same model as all of Rossini’s from this period — sonatina form with a lengthy introduction, and one of those unforgettable Rossini slow crescendos at the end of the exposition. On Saturday, it proved a thorough delight to hear. Like Cassius, Polivnick has a lean and hungry look, one better suited for being trusted by an orchestra than by Caesar. The musicians translated that look into a vigorous and fluid performance, steered by their conductor’s strong gestures and crisp separation of successive sections. It was as if he marked changes in the music by scooping it up and setting it on a different shelf.

This approach was even more pleasing in Liszt’s familiar Hungarian Rhapsody No. 6 (No. 9 in its original version for piano), “Carnival in Pest.” This rambling, disjointed collection (there’s a reason it’s called a rhapsody) suggests wandering around the carnival, seeing what’s up here and there. Enjoyable in themselves, the parts don’t add up to a larger whole.

Like Cassius, conductor Paul Polivnick has a lean and hungry look, one better suited for being trusted by an orchestra than by Caesar. The piece needs a firm jolt of energy to go anywhere. Polivnick supplied this from the start, as he looked to the cellos to ready them for providing the growling motive that begins the work. Near the end, the music begins to cohere to a rambunctious climax. Here, SSV’s relatively small size was turned into its virtue, as it appropriately gave off the tart air of an able and enthusiastic town band rather than the monumental thunder of a major orchestra.

Somehow, the orchestra accumulated heftier inner resources for the major work on the program, Beethoven’s Symphony No. 5. Beethoven is apt to sound blatty if underpowered; that was not a problem here. This performance had piquancy without vulgarity. Instead of the crisp sectional approach he used in Rossini and Liszt, Polivnick presented the symphony as a single potent entity. This was apparent from the start, as he drove through the repetitions of the famous four-note motive with a tight rein on the fermatas and scant emphasis on the rests. The Andante had all the urgency it’s capable of, and the scherzo plunged straight into the finale without a change of course. Rossini or Liszt, at least in Polivnick’s interpretation, would have stopped and winked at the audience at that point. Beethoven had no time for such antics.

SSV’s relatively small size was turned into its virtue, as it appropriately gave off the tart air of an able and enthusiastic town band.

Throughout all three works, shadings of dynamics and crisp performances by all the instruments enlivened the music. Where I sat, in the front balcony (or “Grand Tier,” as it’s called), an already bright-sounding auditorium was at its brightest. Winds tended to overpower the strings in the sound balance there, yet all the players were sufficiently together that it did no aesthetic harm to the music.

The one piece on the program that didn’t work was the Love Scene from Berlioz’ Romeo and Juliet. It was ill-chosen both for its companions and for the stylistic thrust of the rest of the program. This music calls not for vigor or energy but for emotional passion, which it didn’t get. This grand union of love came across as hesitant, even tentative, particularly (though not entirely) in the winds. The biggest problem came with the cellos, who have major exposed parts in the role of Romeo. SSV’s cello section has long been problematic, though it’s been getting much better lately. Elsewhere in the concert, the cellos were solid and up to snuff. Romeo, though, sometimes went painfully out of tune. It’s a shame, because the tone quality, as distinct from intonation — especially in the strings and in the passages where strings play together with winds — remained excellent. There are good bones here; they just need the proper flesh on them.