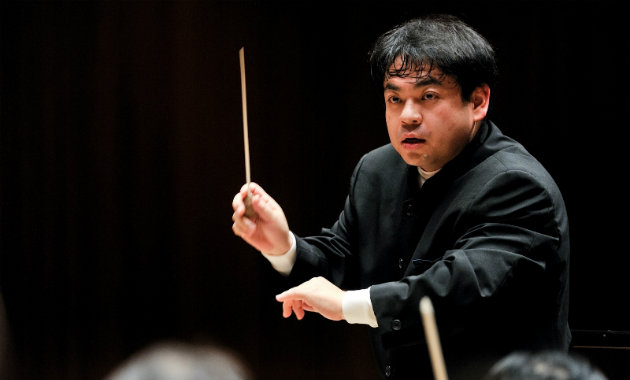 Symphony Silicon Valley invited two of its most popular guest performers, conductor Tatsuya Shimono and soloist Ju-Young Baek back for a concert at San Jose’s California Theatre on Saturday, Jan. 23. The results were gratifyingly intricate and well-wrought rather than merely spectacular.

This was perhaps the best performance here yet for Shimono. The program’s three medium-length works were securely within his comfort zone, and the results seemed better than his earlier encounters with Bruckner and Shostakovich.

The most colorful and impressive of the lot was Paul Hindemith’s Symphonic Metamorphosis of Themes by Carl Maria von Weber. This major contribution to the genre of 20th-century retellings of older music was composed by a master orchestrator. Hindemith filled his composition with complex multiple lines, and he wanted all of them to be heard. This was a bright, quirky, and fun work of music. After the first movement, a man down the row from me burst out with “Wild!”

Under Shimono’s baton, SSV laid them all out audibly. This performance bloomed with inner lines, twirls, curlicues, low growls, and a host of other effects usually buried. This was a bright, quirky, and fun work of music. After the first movement, a man down the row from me burst out with “Wild!”

Even from a seat far forward in the auditorium, the sound was finely balanced. Of all the clear and prominent soloists, the one whose contributions most securely anchored the work was timpanist Robert Erlebach.

Schubert’s Symphony No. 5 in B-flat provided a trip away from the wilder end of the musical spectrum. The most small-scale and sedately classical of Schubert’s early symphonies, this work proceeded with a handsomely restrained, calm seriousness. Despite Schubert’s distinct harmonic style, quite different from that of his classical predecessors, the performance had Mozartean grace and beauty.

If the Schubert sounded like Mozart, then Max Bruch’s Violin Concerto No. 1 in G Minor – his most famous work – sounded like Mendelssohn. The orchestra played with rich sweetness and grace. There was less of a heavy imitation of Brahms than is often heard in Bruch.

Soloist Ju-Young Baek has been impressive and powerful on every appearance in San Jose, burning her way through Sibelius and Brahms. To Saturday’s Bruch she brought a woody, boxy sound, as if the body of the instrument were doing all the work.

Baek’s style was full of compelling, lyric beauty, firm and gritty attacks on notes, and an impressive variety of tone. She went through at least three different tone colors in the long first note of her opening solo alone. The finest moment may have been the closing phrase of the Adagio. Baek started with a whispering pianissimo, rose up in volume, and then faded with exquisite symmetry and refinement.

For an encore, Baek presented one of Paganini’s Caprices, full of double-stops and harmonics. At the end of the piece, she lost control of the harmonics, but she finished the piece with a shrug and a smile to renewed applause.