“I closed my eyes so I wouldn’t be distracted by the visuals,” my companion explained after the concert.
All well and good, if in fact music had been the primary component of this performance of Terry Riley’s Sun Rings (2002). But in Stanford’s Memorial Auditorium, given that the compelling historic film footage and visuals projected onto both the ceiling and onstage backdrop, beautiful lighting effects, space sounds amplified in surround configuration, and performer-cued electronics were equally vital elements of Riley’s gestalt, how could anyone shut out one part of the creation and pretend to comprehend the whole? 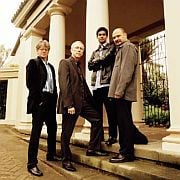 It will be interesting to see how SFCV chooses to list this review. Classifying Sun Rings as “Chamber Music” seems an injustice. In fact, no current category, not even “Contemporary Music,” begins to tell the tale. “Chamber Art,” “Performance Art,” “New Music Work,” or “Performance Work” a la George Coates might be more appropriate. In this age of hybrid art forms, when even long-established symphony orchestras project space images during performances of Holst’s The Planets, the nature of classical music is changing almost as rapidly as the face of the planet itself.
Inspiration for Collaboration
In spring 2000, the NASA Art program invited Kronos to take sounds of space and weave them into music. The space sounds were recorded over a span of 40 years by plasma-wave receivers, built by physicist Don Gurnett, that were transported on spacecraft. When Kronos Artistic Director David Harrington first heard them, he thought they “sounded like part of nature, but not like any sounds I had ever heard before.”

Harrington then contacted Terry Riley, with whom Kronos has collaborated ever since the two men met while Riley was teaching at Mills College in the 1970s. They soon met with Prof. Gurnett, who explained that the recorded whistling sounds were made either by lightning or charged particles, the birdlike sounds were spontaneously produced by electrons trapped in the magnetic fields that surround certain planets, and so on.

Riley composed the 85-minute intermissionless work between August 2001 and July 2002. He envisioned that its 10 peace-oriented soundscapes would take listeners “in and around the planets, hearing the quartet and choir as they journeyed through the distant sounds of exotic atmospheres.”

The team brought in visual designer Willie Williams, known especially for his work with rock group U2, London’s Southbank Centre, and the SkyChurch multimedia performance space at the Experience Music Project in Seattle. They also called upon lighting designer Laurence Neff, who has been working with Kronos for 22 years, and sound designer Mark Grey, who created the electronic soundscape of Doctor Atomic. Sun Rings premiered at the University of Iowa on October 26, 2002. It has since received at least 30 additional performances, including one at the 2003 San Francisco Jazz Festival.
Musical Spacescape
While some of Riley’s more jazz-oriented compositions wander far off the beaten path in terms of modes and rhythms, Sun Rings’ extraterrestrial journeys seem firmly rooted in a pre-Schoenbergian, Romantic palette permeated by a jazz-tinged, postminimalist, ancient Indian/New Age/science fiction aesthetic. One movement is titled “Beebopterismo," another “The Electron Cyclotron Frequency Parlour.” Try putting those in your pipe and inhaling.

Sun Rings is not a work that can be adequately described by verbal means. Yes, there are repeated structures, key modulations, lyrical passages alternating with others more explosive in nature. But besides explaining that in one place, the string quartet played over “boom booms,” in another section provided counterpoint to birdlike sounds, and frequently merged with space sounds and images to create otherworldly spacescapes, I am challenged to convey the content of a multidimensional work of art that is so much more than the sum of its parts.

The melodies are simple, but by no means simplistic in their evocative power. When so-called minimalist repetition comes to the fore, it seems to propel the listener on a dual journey through space and consciousness. Particularly in the movements that call either for vocal solos, women’s chorus, or full chorus, you would not be orbiting a paper moon to think along the lines of Daphnis et Chloe meets Starship Voyager.
Everything Comes Together
Please don’t think that Riley’s creation is all woo-woo (which is what I think of parts of Ravel’s D et C). On the contrary, his post-9/11 metaphysic is as much concerned with peace, humanity, and compassion — what he calls the “polyphony of prayers that goes drifting up” — as astral journeying. As such, his music’s intentionally accessible beauty works hand in hand with gripping visuals to impart a sense of wondrous, transcendent unity.

My only yes-but (or but-yes) in an otherwise enthralling evening concerned my inability to catch most of the chorus’ words. Regardless, its beautifully tuned, naive sounds conveyed Riley’s intentions far beyond the repetition of “Let there be peace.” Thanks to Kronos’ inexhaustible dedication, top-notch sound engineering, and a venue whose acoustics and proportions seemed near ideal, Riley’s extra-musical journey was an unqualified success. I can’t wait to experience it again, and hope for a high-definition DVD.