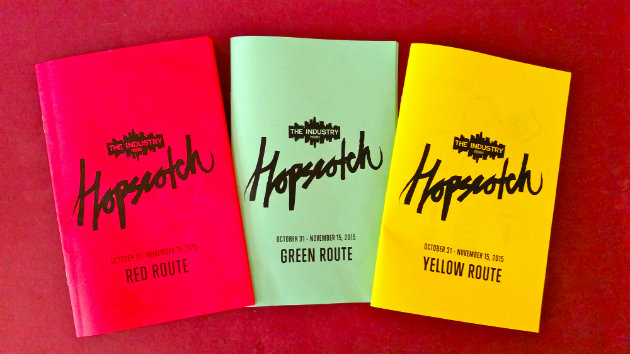 The latest creation by the Los Angeles-based opera company, The Industry, Hopscotch may be referred to years from now as the project that redefined opera for the early 21st century.

During each performance, three audiences divided into groups of four are ushered into sleek, black limousines. From that point (in cars and on foot) they travel one of three entirely different storylines, designated Red, Yellow, or Green. Each route weaves its way through miles of Los Angeles streets combining in-car performances with scenes in a variety of fixed locations— from rooftops and cemeteries to the banks of the Los Angeles River and the claustrophobic interior of an Airstream trailer.

The car becomes the opera’s central metaphor for life in Los Angeles — a closed environment where we spend endless hours, insulated and transitory. Our world is framed by the windows of our cars, while others on the street or in their cars look back at us. So, appropriately to Los Angeles — city of freeways and 10,000 streets, the central storyline of Hopscotch, begins with a traffic accident.

Lucha, a young performance artist and puppeteer, inadvertently collides with a motorcyclist. His name is Jameson and he works for JPL (the Jet Propulsion Laboratory). As they exchange information, Lucha writes hers on the back of a postcard, which is also an invitation to her latest puppet show based on the myth of Orpheus. She is creating the performance with her partner, Orlando, who is something of a lost soul, haunted by the recent death of his wife. 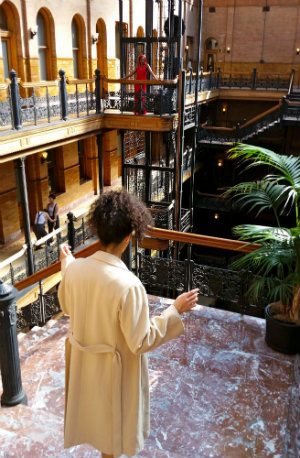 The opera unfolds like a cubist painting, as the ins-and-outs of this story are told in 36 individually-conceived musical chapters, but not in sequence. The effect is deliberately disorienting, to the point of feeling like a surreal dream. Each chapter is set to a libretto created by one of six different writers, the music composed by six different Los Angeles composers. There are three complete casts of singers, musicians and dancers.

Each route is different with its own set of chapters, locations, musicians, singers, and dancers. Often they are inside the limo. At other times the audience is ushered from the car to experience wandering encounters, whether it’s the heroic figure of Orpheus singing on the stage of a rundown movie palace; Eurydice pining on the banks of the Los Angeles River (as a stand-in for the River Styx); a spectral Day of the Dead figure wanders through a cemetery; or following young Lucha through Mariachi Plaza in East Los Angeles aglow in her yellow quinceañera gown.

The multiple writers and composers insure multiple perspectives, with no overarching musical or verbal style, matching the fragmentary presentation. The composers — Marc Lowenstein, Andrew McIntosh, Veronika Krausas, Andrew Norman, Ellen Reid, and David Rosenboom — were given the opportunity to chose chapters that interested them, employ vastly different musical styles, as well as the option to pre-record music that would play back inside the cars (often mixing with live accompaniment) or in fixed locations. The result is an ever-flowing blend of cool post-minimalism, choral music, duets, arias, film-noir jazz, Mexican folk songs, and hard rock. There’s even a piece for water-filled wine glasses and an aria accompanied on a tiny (custom made) music box.

The libretto, which is both spoken and sung (in English and Spanish), is by Tom Jacobson, Mandy Kahn, Sarah LaBrie, Jane Stephens Rosenthal, Janine Salinas Schoenberg, and Erin Young, none of whom has written specifically for opera before. Their stylistic approaches, which range from poetry and narrative, to philosophical dissertation, are as varied as the music. And while some scenes are obviously more successful than others, it is the overwhelming impact and uniqueness of Hopscotch that leaves you awestruck.

And then there is the Central Hub (created in collaboration with the Southern California School of Architecture and the audio specialists of Sennheiser). Here, for free, it’s possible to watch all the chapters simultaneously on video monitors as the action is broadcast live from each car and fixed locations, with audiences members often acting as videographers.

Throughout, the performers, the singers, and musicians never acknowledge the presence of the audience, despite the fact that they are just inches apart. At fixed locations, the audience is guided but encouraged to view the action from any angle they please.

The logistics are incredibly complex. As one audience group gets out of a limo another group gets in. Scenes appear and disappear. The windows of the limousine  become a frame for the action outside. There are carefully planned encounters (including a duet for motorcyclist and limo passenger at 40 miles per hour) as well as any number of unpredictable, unrehearsed juxtapositions with the “real” world.  And at the end of each day’s performances, the limos and the entire cast converge on the Central Hub for a grand processional finale set to the tintinnabulation of bells composed by Andrew Norman.

It is unlikely, because of its scale, that Hopscotch will ever be repeated. It is destined to fade like the dream creation that it is. But its impact may be felt for years to come as opera continues to explore new frontiers.

Tickets are $125 for the first two performances of the day, $155 for the final performance, which includes the finale and performances will continue Saturday and Sunday through Nov. 22. The Central Hub is located at 350 Merrick St. in the parking lot of SCI-Arch. Performances begin at 10:45, 12:45 and 2:45. A complete synopsis of the 36 chapters, along with animations and ticket information can be found at hopscotchopera.com.