Judging from its performance at the Crowden Music Center in Berkeley on Sunday afternoon, the Afiara String Quartet faces a future both promising and challenging. This young ensemble of Canadian musicians, now in residence at San Francisco State University (as assistants to the more established Alexander Quartet), had just returned from a successful trip to the prestigious ARD chamber music competition in Munich, where it was awarded second prize. Sunday's remarkably deft performance of Alban Berg's demanding Lyric Suite left little doubt of the Afiara's potential for developing into an exceptionally fine professional quartet as it matures, and suggests that the Polish Apollon Musagète Quartet, which took first prize in Munich, must have been very fine indeed. 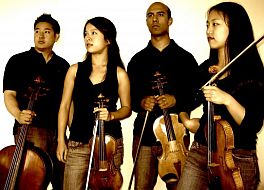 The recital hall at the Crowden Center is one of the best chamber music venues I have experienced in the East Bay, offering a warm but well-defined resonance that the Afiara put to good use. The Center is perhaps better known as the location of the Crowden School, dedicated to offering a well-rounded education to budding young musicians, so it was no surprise to find a group of receptive, well-educated listeners. Unfortunately, the small yet enthusiastic audience also served as a harbinger of the challenges facing a young quartet like the Afiara.

Maybe better publicity will help draw larger, more diverse crowds in the future, but it was disappointing to see only a smattering of young children and parents among the largely graying chamber music public, especially given the fact that the Crowden School's history of success in cultivating young musicians has long been such a beacon of hope.

Sunday's program opened with Franz Schubert's Quartettsatz, in C minor, one of those late works that remains as a single-movement torso, a leftover from a larger quartet project. The scurrying opening gesture presents a kind of virtuosic jigsaw-puzzle challenge — one that the Afiara met with an assuring sense of confidence, setting a tone that prevailed through much of the concert. My one moment of concern came immediately after this impressive opening, when first violinist Valerie Li took the spotlight. At first, Li's playing felt forced, particularly in the lyrical second theme, and, like so many "modern" string players, she does have a tendency to rely too much on portato, spending a lot of time in that territory between a true legato and the crisper articulations that this music calls for, and, in the process, skirting decisions about some of the difficult phrasing problems that Schubert poses.

However, by the time the quartet reached the repeat of the exposition, Li had found her stride, and what followed was a composed, most thoughtful interpretation. I was impressed with the Afiara's light touch in the quieter passages, as well as its willingness to explore subtle, transparent ensemble textures with well-focused intonation and minimal vibrato.
Twelve-Tone Work a Standout
Alban Berg's Lyric Suite, which followed, was the highlight of the program, and the Afiara seemed most at home in this intensely expressive work. Written in 1926, in the full throes of Berg's experimentation with Arnold Schoenberg's compositional theories, the Lyric Suite must surely be among the more popular 12-tone pieces in the repertoire. In recent years, Berg's autograph score, dedicated to his secret lover, Hanna Fuchs-Robettin, has come to light, with clues that add yet another layer to the interpretation of this richly cryptic work, which is also filled with numerological references and allusions both to a suite by Alexander Zemlinsky and to Wagner's Tristan.

While Berg's work offers ample rewards for those drawn to exploring its crosscurrents of deeper meaning, awareness of the complexities lurking in the suite needn't interfere with enjoyment of its purely sensual appeal. Although his efforts at encoding and developing external referents in arcane pitch relationships contribute to a richly complex sense of large-scale form, Berg's treatment of line and texture create a sense of constantly flowing narrative — one of the factors that have made his music so much more approachable than his mentor's.

In the Lyric Suite, a simple device provides a large-scale pattern that is particularly easy to follow: Movements alternate between fast and slow, with the fast movements growing progressively quicker and the slow movements slower. Embedded within this structure are several nods to more-conventional string quartet genres, including a glassy Scherzo and a trio third movement that was especially effective in the Afiara's performance.

The quartet concludes with a doleful Largo desolato. Here, Berg makes his dedication to Hanna Fuchs explicit by suggesting that it include a setting of Baudelaire's poem "De profundus clamavi," a German translation of which Berg appended to his score. In fact, soprano Dawn Upshaw, with the Kronos Quartet, has recorded this last movement as a vocal setting (in a "reconstruction" by George Perle), and her performance certainly makes a compelling case for this connection. But the lyric qualities of the movement are just as well served by a good quartet performance, and the Afiara's on Sunday was exceptionally fine. Violist David Samuel's plaintive declamation had a vocal quality that was noteworthy.

Beethoven's Quartet No. 8, Op. 59, No. 2 (the "Razumovsky"), which concluded the program, demonstrated both the strengths and weaknesses of this young ensemble. It's easy for a youthful group to treat Beethoven too reverentially, to miss his quick-witted twists and turns of phrases while searching for a deeper, more profound sense of drama, but a perusal of Beethoven's letters suggests that his profound ambitions were always tempered by an earthy sense of humor. In Sunday's performance, the shaping of individual gestures was often too flat, such as in the lyrical second movement, and transitions between phrases sometimes slipped by a bit too arbitrarily, perhaps in the name of shaping the large-scale structure of a movement. That said, the ability to create large-scale shapes is one of the more difficult and important skills achieved by a mature string quartet, and to its credit, this ability is already one of the Afiara's great strengths.