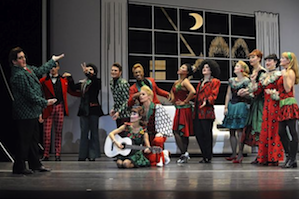 If you believe the ads — and certain members of the local press — you might think that The Hard Nut is a wacky cartoon, a shallow send-up of Tchaikovsky’s Nutcracker with little more on its mind than making audiences laugh.

To be sure, there’s mirth galore in Mark Morris’s 1991 reimagining of Tchaikovsky’s (and E.T.A. Hoffmann’s) original. Presented by Cal Performances, the Mark Morris Dance Group returned to Zellerbach Hall over the weekend to revive the work, and the choreographer’s comic genius worked its magic once again, sending peals of laughter through the hall. More than ever, it seemed a welcome dose of merriment.

But to call The Hard Nut a wacky spoof short-changes it by half. By resetting The Nutcracker to the giddy 1970s, Morris gave the world a new American classic, one that touches the heart, honors its sources in every particular, and speaks directly to our times.

Created during Morris’s tenure as director of dance at the Theatre Royal de la Monnaie in Brussels, Belgium, the work has gone on to become one of the Mark Morris Dance Group’s most beloved evening-length ballets. First introduced by Cal Performances in its West Coast premiere in 1996, it has been presented here 11 times, and Bay Area audiences show no sign of losing interest in it. No mere send-up could engender that kind of enthusiasm.

Morris, one of the world’s most musically cogent dance artists, marries his vision to Tchaikovsky’s score in brilliant and beguiling ways. Unlike many Nutcrackers, his version includes every note of the score — always live, never recorded. His uncommon fidelity to the details and the spirit of Hoffmann’s tale belie the notion that his aim was to skewer the original.

A new American classic, one that touches the heart, honors its sources in every particular, and speaks directly to our times ... As always with Morris, the end of the journey brings a transcendent braiding of love and community.

The production, based on the graphic artwork of Charles Burns, is both dazzling and familiar. From the moment the hyperactive kids, stressed-out parents and well-lubricated hipsters crowd into the Stahlbaum’s Christmas Eve party, we recognize the milieu as one very like our own. The scene is astonishingly kinetic: Morris has them imbibe, bump, stroll, and frug into the midnight hour. Adrianne Lobel’s scenic designs, James F. Ingalls’ lighting, and witty costumes by the late Martin Pakledinaz (who died earlier this year, and to whom these performances are dedicated) suggest the mindless excess of a disposable society; the slightly sinister Drosselmeier could be this crowd’s self-help guru du jour.

At the same time, Morris delivers everything that made Hoffmann’s tale enchanting. He gives us a snow scene for the ages, with dancers in tutus and frosty-capped headgear flinging handfuls of snow in exuberant abandon. The waltz of the flowers yields a corps of organic blossoms coaxed to ripeness by an ecstatic Mrs. Stahlbaum. 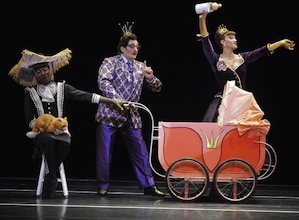 We see the world through the eyes of Marie, a hopeful innocent, and the central story — of a princess defaced, and the prince who travels the world to redeem her — conjures peril, heartbreak, and radiant joy in equal measure. As always with Morris, the end of the journey brings a transcendent braiding of love and community.

This year’s performances, which continue through December 23, feature company stalwarts. Lauren Grant is the beautiful, buoyant Marie, and Kraig Patterson, who has danced the role of the Housekeeper/Nurse since 1991, is a consistent delight. June Omura, ideal as Fritz, the bratty Stahlbaum son, will retire after these performances; it’s hard to imagine anyone replacing her. Morris, who originated the role of the drunken party guest (yes, the one trailing toilet paper on his shoe), has moved into the role of imperious Dr. Stahlbaum, and John Heginbotham is the elegantly affected Mrs. Stahlbaum. The new cast members — including Jenn Weddel’s Louise/Princess Pirlipat, and Billy Smith’s Drosselmeier — are seamlessly integrated. Conductor George Cleve, applying his extensive experience on the world’s ballet stages, draws a performance of considerable élan from the Berkeley Symphony Orchestra and Piedmont East Bay Children’s Choir.

Thanks to former Cal Performances director Robert Cole (who first brought Morris to Berkeley, and frequently conducted The Hard Nut here), the Mark Morris Dance Group has enjoyed a long relationship with the organization. That relationship continues under current director Matias Tarnopolsky. In June, Morris will return as music director of Ojai North! with the world premiere of his new Rite of Spring. Still, The Hard Nut — like Morris’s Dido and Aeneas and L’Allegro, il Penseroso ed il Moderato — will always be one of the choreographer’s most profound and vibrant creations — endlessly brilliant, fabulously Romantic, and seriously funny.