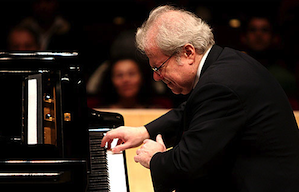 “You may have noticed there are a lot of pieces on this program,” said music director Michael Tilson Thomas, as he introduced this week’s San Francisco Symphony concert to the audience Friday evening at Davies Symphony Hall. Indeed, it had been some time since Thomas had programmed six pieces in the second half of any subscription concert. But there they were — six miniature works, each between four and nine minutes long and several receiving their first San Francisco Symphony performances, gathered together in a salon-style set of the sort made popular by the violinist Jascha Heifetz and others of his era.

There was more substantial fare on the program’s first half — most notably, a brilliant, big-hearted performance of Beethoven’s Piano Concerto No. 3 in C Minor, featuring Emanuel Ax as soloist. And Tilson-Thomas opened the program with a gorgeously expansive account of Mahler’s Blumine (Bouquet of Flowers) — which, at 10 minutes, is short by Mahlerian (or any other) standards, but resonated in this hall, under this conductor, with the impact of a major work.

Still, if the short works by Copland, Debussy, Delius, Sibelius, Rachmaninov, and Delibes lacked heft, the second half’s survey by Tilson-Thomas and his ensemble represented a kind of inspired advocacy. No one would describe these pieces as masterworks — as the conductor observed in his opening remarks, they’re more likely to draw “ahs” than cheers — but these performances suggested that they were certainly worthy of revival.

Copland, whose music from the 1940 film Our Town began the set, was the odd man out — the one distinctly American composer among this European, Finnish, and Russian cadre — but the score’s spare harmonies and placid tempos yielded a gracefully expressive performance. Debussy’s La Plus que Lente (loosely translated, the Slower than Slow) offered exotic contrast in its Hungarian themes, luxuriant strings, and jangling cimbalom. Delius’ On Hearing the First Cuckoo in Spring, absent from the Symphony’s repertoire since 1952, struck the ear as the program’s wispiest entry, but Tilson-Thomas and the orchestra made its swelling strings and piquant woodwinds sound almost persuasive.

The conductor achieved his finest results in Sibelius’ Valse Triste and Rachmaninov’s Vocalise, both exquisitely poised and hauntingly beautiful. Delibes’s brassy Cortege de Bacchus from the ballet Sylvia brought the second half to an outsized, exuberant close.

No matter the repertoire, Ax and Tilson-Thomas always seem of one mind in performance ... the pianist’s deft blend of starry lyricism and fervent drive was well-supported by the conductor’s balance of tension, clarity, and forceful dynamics.

The first half started with Blumine. Tilson-Thomas and the orchestra, having given four performances of Mahler’s Symphony No. 9 just the previous week, returned to this 10-minute orchestral score with palpable tenderness. Originally composed as incidental music for a theater piece — Victor von Scheffel’s The Trumpeter of Sackingen — Mahler recycled it as the Andante for his First Symphony. He jettisoned it after the symphony’s premiere, and it languished for years thereafter; it was finally published in 1968.

It remains a touching, heart-on-the-sleeve piece, beginning with the trumpet solo that rises up from a cloud of shimmering strings and woodwinds. Mahler’s use of orchestral color and texture is subtle and ineffably beautiful: dark-hued cellos emerge, followed by subterranean basses, and plaintive woodwinds. Blumine may not be top-drawer Mahler, but Tilson-Thomas and his ensemble made it sound noble. Mark Inouye gave a splendid account of the trumpet solo, and Jonathan Fischer (oboe), Carey Bell (clarinet), and Timothy Day (flute) made fine contributions.

In between, Ax scaled the heights of Beethoven’s monumental piano concerto. No matter the repertoire, Ax and Tilson-Thomas always seem of one mind in performance; Friday, the pianist’s deft blend of starry lyricism and fervent drive was well-supported by the conductor’s balance of tension, clarity, and forceful dynamics. The outer movements were brisk without sounding blustery, and the slow movement, unfurling at an ideal pace, was luminous. Ax returned for a single encore, a lovely performance of “Des Abends” from Schumann’s Fantasiestucke.